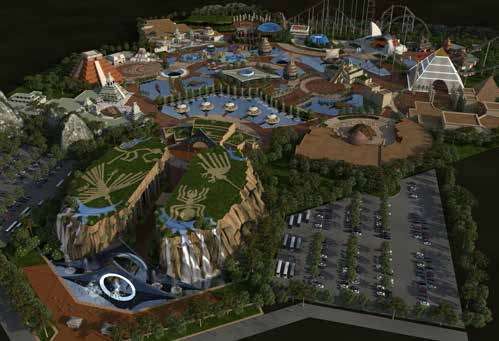 Markus Beyr’s new company, Attraktion! has already landed a dozen new projects – including a ground-floor role in the production of the official Chariots of the Gods theme park.

ABOVE: Overview of the Chariots of the Gods theme park

Markus Beyr, entrepreneur and producer of media-based attractions, is at the helm of a new company, Attraktion! Group, founded to serve the visitor attractions industry with project development services, and to selectively invest in related companies. Attraktion! will also develop new products and visitor experiences in other leisure sectors.

Beyr established Attraktion! Group after an 18year tenure with Kraftwerk Living Technologies, where he had been Managing Director. Leading from Beyr’s prominence in the industry, the company has already landed a dozen new projects ranging from theme park attractions to educational exhibits – including what promises to be a very high-profile endeavor: a ground-floor role in the production of the official Chariots of the Gods theme park.

The “Chariots” theme park is in early stages and is part of an extensive, transmedia rollout that will span a wide range of branded entertainment and media formats. All are based on the eponymous, 1968 book by Erich von Däniken that set forth the theory that extraterrestrial visitors, regarded as deities, brought cultures, religions and technologies to Earth in the ancient past. Chariots of the Gods still tops the international nonfiction book charts with more than 64 million copies sold. 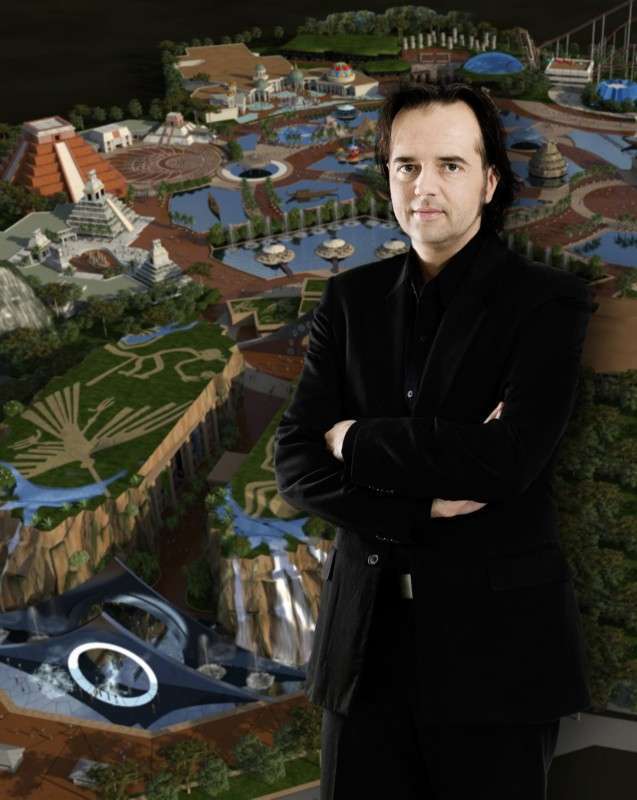 Where will the Chariots of the Gods theme park be built, and when will it open?

We are a step before that. Attraktion! will begin discussions later this year with candidate sites and operator-partners. Estimated opening is a minimum of three and a half years off.

There is no site chosen, but we favor Asia as the location because it has the best potential for the planned size. Culturally speaking, however, the park could be placed almost anywhere in the world. Chariots of the Gods is about our great mysteries, which are to be found on every continent. They hold a magical fascination for all mankind.

What will visitors experience?

For the first time, they will be able to confront the mysteries described by Erich Von Däniken, in a physical setting and richly themed environments. The Pyramids, Stonehenge, Easter Island and other legendary places will be evoked in a dramatic atmosphere that imparts a sense of the ancient civilizations and cultures and the leaders they considered as gods.

It will be a media-driven park, but also incorporate the best in roller coasters and hard rides. Together with state-of-the-art steel rides, media-based attractions, flying spaceships, 4D theaters, and other amazing adventures, the Chariots Of The Gods theme park will seek to position itself among the world’s top destination venues.

What is the planned size for the theme park, and how many visitors will it accommodate?

It will be around 20-25 hectares and be designed for 2.5 million visitors a year.

We understand that Attraktion! is also producing smaller, indoor attractions as part of the “Chariots” line. Can you share information about them?

In addition to the theme park project we are also creating smaller indoor attractions for shopping malls and urban entertainment areas, so that the Chariots Of The Gods experience can be added to any other A-class venue with a family market. We see it as an entertainment anchor comparable to an aquarium or an FEC, and something that can be brought to an existing facility or part of the scheme for a new development.

Icons of the Egyptian world provide premier theming at Chariots of the Gods theme park.

Who will design and build the park and the indoor attractions? Are you looking for creative and development partners in this venture?

We will work with a local developer for the land chosen to develop the park and will recruit a number of designers and creatives. The creative teams are mainly in place for the different projects, but some slots remain available for certain talents.

Yes, Erich von Däniken will have a presence in the various Chariots of the Gods projects – and the presenter and narrator is well-known actor Roger Moore.

As producer, how do you see your role on the project?

In attraction production, we emphasize finding the best project solution for the client, the client’s guests, the budget and the particular location We are the interface between all parties, and we understand all positions. Therefore we can create a smooth project development process with expertise in any discipline.

The development of an interdisciplinary team to create something unique and successful is something I find most rewarding. I love working with great designers, architects, media specialists and other creatives. Media production is one of our particular areas of expertise. We have produced numerous films and 3D and 4D attraction media for our projects – I have been involved on some 200 media-based projects.

Who are the parties to the IP license deal for Chariots of the Gods?

The IP of Chariots was bought by Media Invest Est.

How does your new company differ from your previous role?

Attraktion! Group is focused on attraction development and production, whereas Kraftwerk is primarily concerned with the delivery and integration of hardware. Over the years, I began to enlarge my professional scope and take on more of a production consulting role with clients, providing help in development and making an attraction right. But this was not really compatible with the system integrator role. This is why I resigned my position with Kraftwerk and sold my shares of the company. 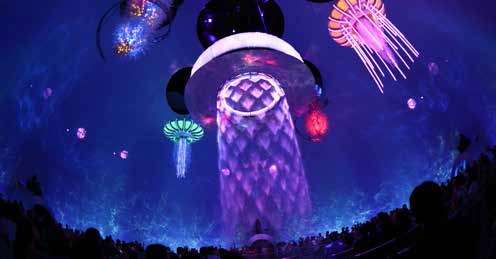 What past projects are you most proud of?

Three recent ones that stand out in my mind are Marvel Superheroes 4D for Madame Tussauds London, Arthur L’Aventure 4D for Futuroscope Park in France, and the Dragons Treasure Bubble Theater at City of Dreams, Macau. All three are multimedia theater experiences using dome projection. The dome experience is the most immersive attraction we can think of – if done right. Arthur 4D and Dragons Treasure both received Thea Awards. The Dragons Treasure dome theater in Macau was the biggest single project we had built with my former company. The visitor success of this single project alone defined a new attraction format: the “themed entertainment fulldome experience.” We are now seeing many attempts to replicate it elsewhere in China. We are pleased to be involved in several new major dome developments in Asia and Europe, giving us the opportunity to develop this format further.

In addition to big custom projects, do you also work on smaller attractions for smaller venues?

Sure, we do several small project developments, from brand lands, tourism and heritage centers…

Is Attraktion! involved in transmedia or cross platform ventures?

Yes, with one company in our group we do game developments for home, online and themed entertainment.

You have done a lot in Europe and Asia. Will the US also be a market for you?

Not so much for major project developments, but to support our companies within the group. So yes, besides attraction productions, we are investing in young companies with unique talent, which will do work also in the US.

DänikenAtlantis, one of the highly themed lands at Chariots of the Gods theme park

Getting back to Chariots of the Gods, what other branded experiences or products are planned and when will they appear?

The first will be a TV series, starting in 2013. Followed by a computer game later that year. Followed by the touring live show, a feature film, the theme park and indoor attractions.

How can the press and the public get updates on the “Chariots” project?

Starting with the launch of the TV series, there will be regular announcements and press releases. • • •

Judith Rubin
Judith Rubin ([email protected]) is a leading journalist, publicist, strategist, blogger, content marketing specialist and connector in the international attractions industry. She excels at writing about all aspects of design and technical design, production and project management. Areas of special interest include AV integration and show control, lighting design and acoustics, specialty cinema, digital video and world’s fairs. Judith has ties to numerous industry organizations. From 2005-2020 she ran communications, publications and social media for the Themed Entertainment Association (TEA). In 2013, she was honored with the TEA Service Award. She was development director of IMERSA, and co-chair of the 2014 IMERSA Summit. She was publicist for the Large Format Cinema Association in the 1990s, now part of the Giant Screen Cinema Association (GSCA) and has also contributed to the publications of PLASA, IAAPA and the International Planetarium Society. Already making her mark as a magazine and book editor, Judith joined World’s Fair magazine in 1987, which introduced her to the attractions industry. Launching as a freelancer in the mid 1990s she has contributed to dozens of publications and media outlets including Funworld, Lighting&Sound America, Sound & Communications, Urban Land, The Raconteur and The Planetarian. She joined InPark in 2010. Judith earned a Bachelor of Fine Arts from Pratt Institute. She has lived in New York City and the San Francisco Bay Area, and now makes her home in Saint Louis, where she is active in the local arts and theater community.
Share
Facebook
Twitter
Linkedin
Email
Print
WhatsApp
Pinterest
ReddIt
Tumblr
Previous articleMadame Tussauds Sydney Previews Opening with Premiere of Dannii Minogue Figure
Next articleStax Museum Uses iPad Kiosks to Expand the Immersive Experience