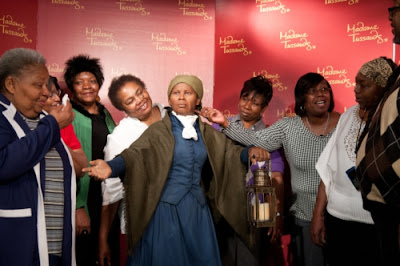 “Harriet Tubman was an incredible woman whose accomplishments and contributions played a pivotal role in the history of the United States, cementing her status as a true American icon,” said Dan Rogoski , General Manager of The Presidents Gallery by Madame Tussauds. “We are honored to have Harriet Tubman’s descendants with us today for the unveiling and induction of her wax figure into our expanding Presidents Gallery — an interactive journey through America’s history.”

Harriet Tubman (born Araminta Ross, calling herself Harriet later in life) was an African-American abolitionist, humanitarian and spy for the Union during the U.S. Civil War. After escaping from slavery, into which she was born, she reportedly freed more than 300 slaves via the elaborate network of safe houses known as the Underground Railroad. Tubman was born in Dorchester County, M.D., an area from which many of the descendants and family members attending the event currently reside, including Charles E.T. Ross and Valery Ross, who live in Cambridge, M.D.

“We are ecstatic and overjoyed to see Aunt Harriet being celebrated and receiving recognition for her contributions to humanity, which is long overdue,” said Charles Ross.

Children from Washington D.C.’s Harriet Tubman Elementary School were also on-hand to witness the unveiling of the figure of the historic woman for whom their school is named.

Madame Tussauds studio artists in London worked tirelessly to create this entirely new wax figure of Harriet Tubman. The figure-making process is incredibly intricate taking anywhere from three to six months from start to finish. For example, artists insert each strand of hair individually; creating just the head of the wax figure can take up to five weeks alone. Materials such as red silk are used to create the veins on the eyeballs and it can take technicians almost four days to make a set of teeth. In order to make the figures as lifelike as possible, Madame Tussauds artists study hundreds of photographs and when available, hours of video footage. Of course in some cases, the artists do not have the luxury of photographs or videos (as with the Tubman figure) and need to rely on historical accounts, even paintings.

ABOUT THE PRESIDENTS GALLERY BY MADAME TUSSAUDS
The Presidents Gallery by Madame Tussauds is a fully interactive, full-sensory experience, where visitors are able to touch, see and hear major historical events and celebrities in a way unlike any other Washington D.C. attraction. The attraction showcases wax figures of some of the world’s most recognized icons, including: international superstars Angelina Jolie and Brad Pitt; superstars Michael Jackson, Britney Spears, Jennifer Lopez, Rihanna and Tyra Banks; as well as all 44 U.S. Presidents, featured in the recently-launched U.S. Presidents Gallery. www.madametussaudsdc.com

Joe Kleimanhttp://wwww.themedreality.com
Raised in San Diego on theme parks, zoos, and IMAX films, Joe Kleiman would expand his childhood loves into two decades as a projectionist and theater director within the giant screen industry. In addition to his work in commercial and museum operations, Joe has volunteered his time to animal husbandry at leading facilities in California and Texas and has played a leading management role for a number of performing arts companies. Joe has been News Editor and contributing author to InPark Magazine since 2011. HIs writing has also appeared in Sound & Communications, LF Examiner, Jim Hill Media, and MiceChat. His blog, ThemedReality.com takes an unconventional look at the attractions industry. Follow on twitter @ThemesRenewed Joe lives in Sacramento, California with his fiancé, two dogs, and a ghost.
Share
Facebook
Twitter
Linkedin
Email
Print
WhatsApp
Pinterest
ReddIt
Tumblr
Previous articleGaylord Q4 2011 Financials
Next articleDisney Parks and Resorts Q4 2011 Financials