Google “customer experience for modern audience” and prepare to be overwhelmed with the search results. There is no shortage of polls, surveys, white papers, and reports trying to uncover the secret behind engaging with the masses of modern day. Especially given the constant distractions in today’s world, it’s hard to compete for attention. Consumers are more empowered than ever, with new media and information at their fingertips, all of which fuels the development of new methods of engagement to combat the ubiquitous handheld screen – a challenge that is being met head-on in the sports industry.

The second-screen effect – described as “a mobile device used while watching television, especially to access supplementary content or applications” – has become the sports world’s best and worst friend, and it is having an impact on game attendance. The second screen is both a distraction from one source of entertainment, and a portal for supplemental and/or potentially more direct contact with the consumer. When guests enter an experience, the second screen in many ways becomes the first screen. Their phone becomes the primary means with which guests document and engage with others who may or may not be in the same physical space.

This blending of the digital and physical worlds continues to be a delicate balancing act as experience designers try to find technological synergies that add to the experience without sacrificing the most important, human piece of the puzzle. The first hurdle to tackle for sports organizations was to ensure Wi-Fi access for fans at their sporting venues. Now that 75.3% of international sports leagues and US universities report access to high-quality Wi-Fi at all seating, it’s time to harness the technology that’s available (Source: 2016 State of the Stadium Technology Survey published by Sports & Entertainment Alliance in Technology and Mobile Sports Report). The challenge for designers is to create compelling experiences that share stories rooted in history and tradition, seemingly the antitheses of technology. However, just like today’s consumer, stories can also be empowered by embracing technology to build newer significance and personal connections for each guest.

A great example of how technology can deepen this significance was perhaps best described in less than 140 characters a few months ago. While thousands of world-class athletes were competing in Rio this past summer, a popular tweet shared and favorited by second-screening fans around the world was broadcast to the twitterverse by a Bill Murray parody account:

Not only does this tweet paint a hilarious picture for anyone who can visualize the possibilities, but it points to exactly what people want to know… how does this relate to me? How can I comprehend the skill and strength of an MVP through my own experience? New technologies and mobile devices have the ability to shine a light on the individual. We are better equipped to understand the world around us because we have a handheld device to interpret and share our story for us. This use of tech reveals how the personal is the universal – or how personalization available with new technology can be applied to create a universal experience. This certainly seems to be the trend for brands aiming to breathe new life into popular attractions or traditions. A look at fan experiences like Super Bowl City, MLB All-Star FanFest and the Scotiabank World Cup of Hockey Fan Village reveals how the integration of technology has been embraced to amplify the personal experience.

Often referred to as “baseball heaven on earth,” MLB All-Star FanFest is the quintessential sports fan event. Like a theme park, it offers a multifaceted, guest experience devoted to the sport, offering hands-on interactive games, celebrity autograph signings, baseball clinics hosted by professional players and coaches. Like a museum, it offers educational exhibits dedicated to exploring baseball’s history. Although its creators knew they had a winner, they had no idea that FanFest would maintain its appeal through the years and become a mainstay as part of the MLB Midsummer Classic festivities more than 25 years later. 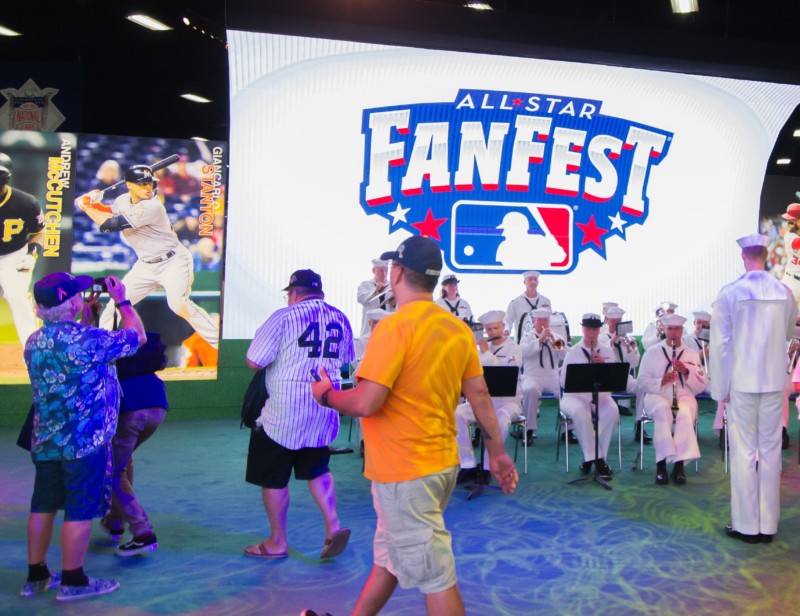 In 2016, MLB All-Star FanFest returned to San Diego (where it had previously been staged in its sophomore year, 1992) with an updated and upgraded look and feel. FanFest attractions have evolved over time, changing to reflect each new host city annually, but for the most part, its main attractions and event architecture have remained the same. That is, up until now – and this is where our discussion about personalization, digital media and two-screen usage comes back in. 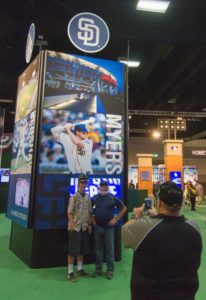 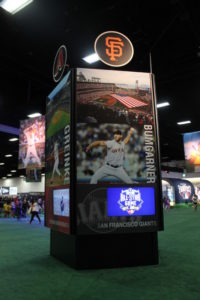 In fall 2015, MLB committed to move forward with a re-design of event elements, which will be rolled out over the next three years, starting with the recent installation at the San Diego Convention Center. The updates focused on changing the environment to create a greater sense of scale, giving the immediate impression that baseball fans were walking into an experience like no other. FanFest set the scene from floor to ceiling, beginning with the arrival. As guests entered the space, they were enveloped in video, audio and large scale graphics, immersing fans in the baseball stories about to unfold and ushering them into a bigger and better experience. New elements included six iconic towers designed to connect fans with their teams. Measuring 21 ft. tall, each side of the five-sided structures highlighted an MLB team. Whether or not fans were rooting for the local hometown heroes, their team still had a place at MLB All-Star FanFest – just like the All-Star game itself. The towers provided great photo ops – and great content for personalization. These new additions created a dynamic sense of place and put fans in the center of the action, compelling them to document their experience with their smart phones and share content far and wide. 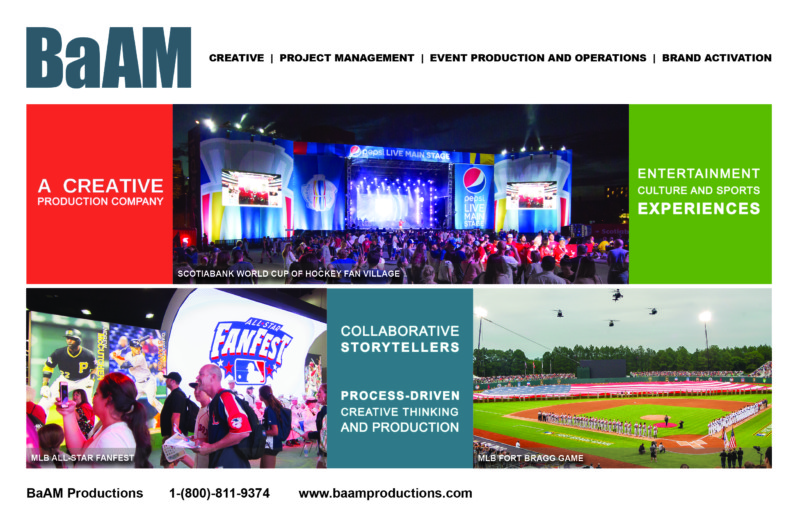 Few will argue that the NFL Super Bowl is the “ruler” of sports entertainment in almost every sense of the word; providing the crème-de-la-crème of sports fan experiences and often setting the benchmark for other leagues and teams. It’s interesting to look at how the NFL has engaged fans in the past and how it continues to grow its fan experiences outside the stadium with leading edge sponsor activations that tap into the personalized story. 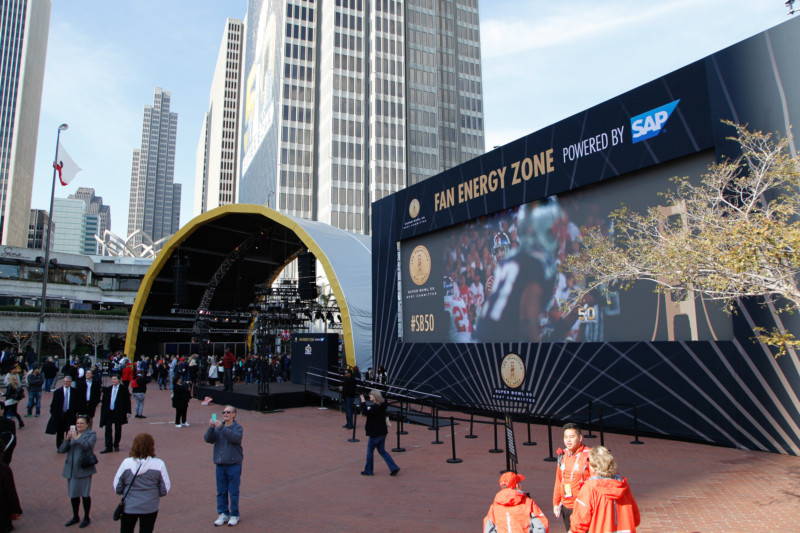 Earlier this year, Super Bowl City was a free, massive outdoor fan experience on Market Street in downtown San Francisco, celebrating Super Bowl 50 with sponsor activations like the Fan Energy Zone Powered by SAP. SAP aimed to reflect the innovative technologies coming out of the Bay Area and live up to the Host Committee’s goal to make Super Bowl 50 one of the most technologically advanced Super Bowls with immersive activations like “Quarterback Challenge.” SAP applied a variety of technologies to put the fan in the center of the action. In this case, virtual reality headsets transported fans to Levi’s Stadium – home of the San Francisco 49ers – where fans could participate in training drills or lead their team in a game-winning play. At the core of this experience was SAP’s “gaze detection” technology, which meant that fans could select the receiver that they wanted to pass to and a handheld trigger could simultaneously measure their timing and accuracy. Whereas MLB All-Star FanFest built an environment that compelled fans to interact with the space by using their own handheld tech, SAP’s Super Bowl City activation used responsive VR technology to transport them to a different environment. Users were able to control their actions, creating a heightened sense of personalization within the virtual setting.

Later in 2016, the Scotiabank World Cup of Hockey Fan Village opened its doors to welcome World Cup of Hockey fans in Toronto’s Distillery Historic District. This free, 10-day event meant that fans who couldn’t get tickets for a game at the Air Canada Center still had a place to experience the excitement of the World Cup. The Fan Village blended the tactile with the digital. Fans could check out exhibits showcasing the World Cup trophy designed by Frank Gehry while also stepping into an assortment of high-tech fan activations like the Pepsi 360 Experience, which created shareable GIFs of fans experiencing an Air Canada Centre locker room re-creation.

One of the most popular attractions offered a blend of digital metrics with real-time coaching. The SAP Skills Challenge incorporated cutting-edge responsive technology with fan-favorite hockey interactives. BaAM worked closely with SAP who developed software enhancements for this in-demand attraction. It featured a 15 ft. SAP Skills Challenge leaderboard at the entrance displaying live scores for all to see. Each set of players was provided a coach to guide them through the skills then guests could compete against each other and watch the scoreboards light up at each game. Fan match-ups tested skills like “hardest shot,” “perfect pass,” and “sharp shooter.” Cumulative results from their competitions were summarized for the players and then top scores made their way to the leaderboard. Each interactive game incorporated the latest technology and actual training tools used by professional players. 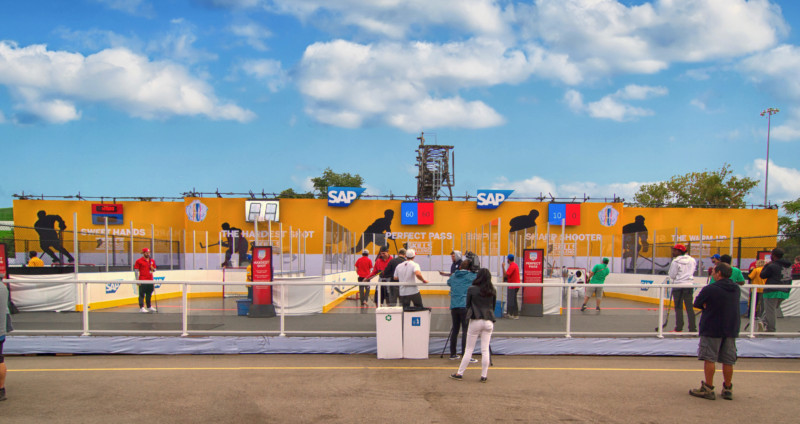 The hockey equipment and approach to coaching at SAP Skills Challenge ensured authenticity to the sport while custom printed scores and real-time leaderboard ranking captured fan interaction. Fans could experience the hockey skills required of players in a best-on-best tournament like the World Cup of Hockey in relation to their own accomplishments.

Although each fan experience embraced technology in different ways, the examples from MLB, NFL, and the NHL highlight technology’s supporting role in the guest story. An experience that connects with the personal is far more likely to resonate with an audience and encourage them to share the excitement outwards. And there are multiple ways to create that connection: by creating an environment that awes and engages; by harnessing technology to respond to specific actions; by sharing individual metrics to participants; and so on. Ultimately, technology can be high-tech, low-tech, or a combination of both and still achieve the sense of personalization and guest-centered experience that fans crave. • • •

Joe Kleimanhttp://wwww.themedreality.com
Raised in San Diego on theme parks, zoos, and IMAX films, InPark's Senior Correspondent Joe Kleiman would expand his childhood loves into two decades as a projectionist and theater director within the giant screen industry. In addition to his work in commercial and museum operations, Joe has volunteered his time to animal husbandry at leading facilities in California and Texas and has played a leading management role for a number of performing arts companies. Joe previously served as News Editor and has remained a contributing author to InPark Magazine since 2011. HIs writing has also appeared in Sound & Communications, LF Examiner, Jim Hill Media, The Planetarian, Behind the Thrills, and MiceChat His blog, ThemedReality.com takes an unconventional look at the attractions industry. Follow on twitter @ThemesRenewed Joe lives in Sacramento, California with his wife, dog, and a ghost.
Share
Facebook
Twitter
Linkedin
Email
Print
WhatsApp
Pinterest
ReddIt
Tumblr
Previous articleGARNER HOLT PRODUCTONS: The face of animatronics
Next articlePANASONIC+APPLE+VIDERO: The magical mobile media tour

State of closure: California’s COVID-19 policies and the impact on tourism