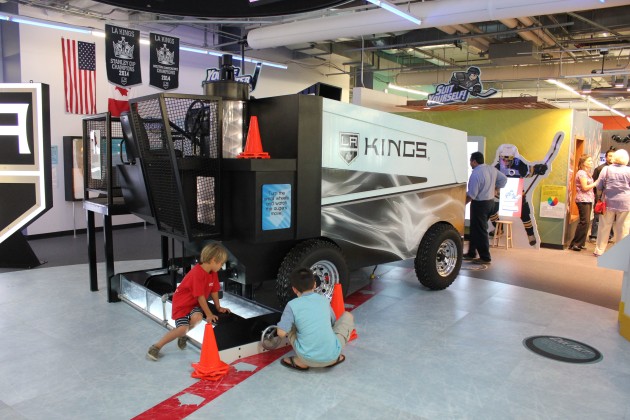 ABOVE: At Discovery Cube LA kids get to explore the science behind the sport of hockey in a truly hands-on way. Photos courtesy of BaAM.

Sports brands reach out in new ways to engage fans

[quote]sports brands are also connecting with existing fans and potential fans by finding synergies and partnering with institutions such as museums and science centers to create interactive, branded spaces that offer a variety of benefits to visitors.”[/quote]

[dropcap color=”#888″ type=”square”]M[/dropcap]anagers of sports brands, as in any fan-based industry, are constantly thinking about how to connect with the next generation. The transformational use of mobile and digital technology has maximized fan connectivity and interaction with teams and brands, which continues to be a huge focus for teams in all professional sports. This includes finding innovative ways to move beyond the physical space – to reach beyond the stadium walls, merging tech and guest experiences for something more than a passive spectator sport. This offers the chance to engage new, curious, and/or passionate fans. After all, sports content makes for great storytelling.

A recent Goldman Sachs Global Investment Research report stated that Millennials – the next generation of patrons, and the biggest generation in US history – are more interested in “Access, not ownership.” This idea of access is essential to developing and maintaining a fan base. To that end, sports brands are also connecting with existing fans and potential fans by finding synergies and partnering with institutions such as museums and science centers to create interactive, branded spaces that offer a variety of benefits to visitors. These exhibits are ultimately crafted in a way that grants access to a sought-out team and introduces the public to a brand’s particular fan lifestyle.

Projects like the award-winning LA Kings “Science of Hockey” at Discovery Cube LA [DCLA] illustrate how sports brands are rethinking fan outreach beyond their typical spaces and creating more access to grow and provide value to their fan base. DCLA and the LA Kings teamed up to create the 2,500 sq. ft. permanent exhibit that immerses guests in the hockey experience to explore the game on and off the ice, giving them an opportunity to touch aspects of the game that are not always available to the public. Everything within the exhibit is modeled after existing properties of LA Kings or STAPLES Center (the team’s home arena), and current players are a key feature in images and media throughout – providing a strong sense of access to sports heroes such as Drew Doughty and Jonathan Quick.

The exhibit has the look and feel of an arena, which comes from the use of authentic materials throughout the space – HDPE rink boards capped with black, rubber matting and ice-textured flooring inset with the authentic center line from STAPLES Center. It also features thoughtfully-designed replicas such as the iconic Zamboni, the scaled version of the massive STAPLES Center scoreboard, and the reproduction of the LA Kings locker room that captures the essence of this exclusive inner sanctum of the STAPLES Center. The experience works as a whole to put the guest in the middle of their own story, where they can walk in the shoes – or skates – of current players. From entering through the Player Tunnel with fans cheering them on, to sitting in the locker room modeled after the one used by the team today, the exhibit connects guests with all the sights and sounds that they would experience at an LA Kings hockey game.

The inspiration behind the design was all about sharing the team’s passion for the game in a way that positively influences all aspects of visitors’ lives. The experience builds excitement and anticipation for those who have never watched a game of hockey or put on skates; not to mention the learning that takes guests through the mathematics of the game, the physics of Newton’s laws of motion, the art of color theory, the neuroscience behind goalie reaction time and the chemistry of ice-making. Science of Hockey provides guests with an up-close look at the sport of hockey and the team while discovering the fascinating science behind the game.

“We know we’re going to gain a lot of fans.” Luc Robitaille, NHL Hall of Famer and current President of Business Operations for the Los Angeles Kings, confidently commented in an interview following the grand opening of Science of Hockey in March 2015.

The exhibit has been a popular success. With strong attendance numbers from the general public and school groups, positive guest feedback, fan-endorsed media and social media coverage and a reported reduction in crime within the local area, the science center and its exhibits are already delivering on objectives. Kafi D. Blumenfield, DCLA Executive Director, Science of Hockey enthused, “I believe we have created a best-in-class attraction that will further science learning and foster future hockey fans!” Science of Hockey was designed and produced by BaAM Productions. 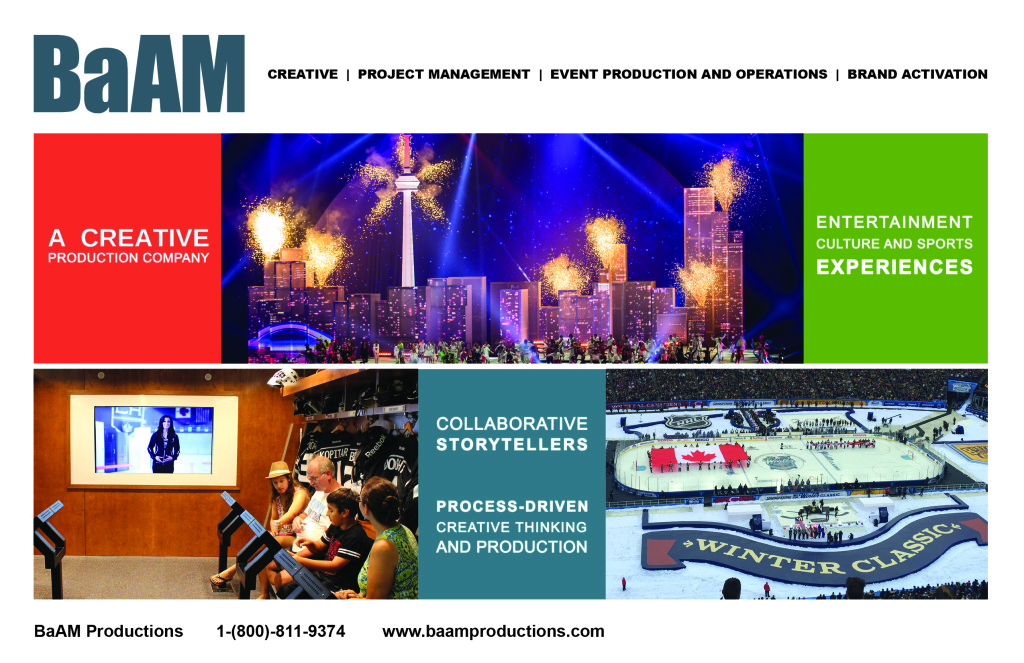 Take me out to the Newseum

The Washington Nationals baseball club recently joined forces with Newseum in Washington, D.C. to create the “Nationals at 10: Baseball Makes News” exhibit, which ran July-December 2015. From Barack Obama’s opening pitch for the 2010 season to the Presidents’ Race tradition at Nationals Park, the exhibit celebrated the Nationals’ achievements and newsworthy events on and off the field over the course of the club’s 10-year history.

In addition to the exhibit, Newseum, in partnership with the Washington Nationals, developed complementary programming such as “Newseum Nights: Game On” to create immersive environments for fans and soon-to-be fans. With hotdogs and pretzels and an open bar on offer, guests could take in the exhibit while channeling some favorite aspects of the ballpark. To help fans connect the dots and move from the museum to the ballpark, the Nationals offered fans who visited the exhibit a special discount of up to 25 percent on select game tickets purchased online – using the museum experience to build their in-stadium crowd. BaAM produced Nationals Winterfest in December 2015 which included some of the exhibits featured at “Nationals at 10.”

Technology can also be harvested to extend beyond the typical field of play for a sports brand. As digital natives, Millennials have grown up with new and evolving tech and have an inherent affinity for technology. Developing fan outreach through tech is a matter of creating empowered consumers who have new expectations unlike any previous generation. This point was reinforced at the Themed Entertainment Association’s (TEA) 2015 SATE Conference on experience design. There, speaker Erik Watts (Senior Director, Technology for the Pittsburgh Penguins) expanded on the new ways that the team is harvesting tech and its capabilities. He introduced the team’s pillars of: Drive, Energy, and Innovation. In his remarks, he observed that “Innovation” isn’t necessarily a pillar associated with a hockey team, but that for the Penguins, it’s a conscious priority to remain cutting-edge and do things that haven’t been done before.

So how do they do that? How do the Penguins position themselves as innovators aimed at improving their fan experience by thinking outside the box? One of the ways they incorporated these big ideas and acted as a tech incubator in the past year took them beyond the arena and even beyond their team offices. The Penguins partnered with the Pittsburgh Technology Council and asked the public to submit new ideas for software, hardware, data analysis techniques or other products to give the team a technological edge over its NHL competitors. The top submissions would then be brought in to meet with the Penguins to present their pitches and explore how their ideas might be fully realized.

Social loyalty is a major focus for developing a core fan base, especially for young teams that may not have the benefit of decades-old franchises. While mobile tech is a key way to engage existing fans, innovative approaches are needed to continually expand the fan base and reach new audiences. Community outreach and partnerships with museums and other institutions are some of the things to be explored to introduce sports brands and engage supporters.

“Diehard sports fans are where it’s at,” said Larry Blocker (Senior Director, Game Presentation & Events, Miami Marlins), speaking at TEA SATE 2014. “You have to have those or your attendance is going to be nothing…” By offering access to the team in new ways, fans are empowered and granted the access they desire, and the sports brand can develop and maintain a relationship with them outside the stadium, arena, or ballpark, whether in-season or during the off-season. • • • 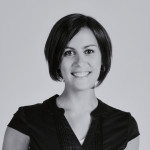 Joe Kleimanhttp://wwww.themedreality.com
Raised in San Diego on theme parks, zoos, and IMAX films, InPark's Senior Correspondent Joe Kleiman would expand his childhood loves into two decades as a projectionist and theater director within the giant screen industry. In addition to his work in commercial and museum operations, Joe has volunteered his time to animal husbandry at leading facilities in California and Texas and has played a leading management role for a number of performing arts companies. Joe previously served as News Editor and has remained a contributing author to InPark Magazine since 2011. HIs writing has also appeared in Sound & Communications, LF Examiner, Jim Hill Media, The Planetarian, Behind the Thrills, and MiceChat His blog, ThemedReality.com takes an unconventional look at the attractions industry. Follow on twitter @ThemesRenewed Joe lives in Sacramento, California with his wife, dog, and a ghost.
Share
Facebook
Twitter
Linkedin
Email
Print
WhatsApp
Pinterest
ReddIt
Tumblr
Previous articleMiami’s Big Bang
Next articleA Great Time for the Industry