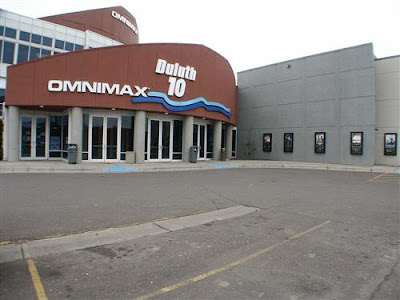 EDITOR’S NOTE: This is the second closed IMAX film theater to be converted into a premium auditorium by a major cinema chain in the past few months.  It follows Cinemark’s opening of a Cinemark XD theater in the former Cannery Row IMAX space in Monterey, CA, USA this past December.  The Duluth OMNIMAX opened in 1996 and closed in March, 2011 due to dwindling attendance.  The OMNIMAX was owned and operated by the Duluth Entertainment Convention Center. — JK

Milwaukee, WI, USA (February 2, 2012) — Marcus Theatres®, a division of The Marcus Corporation, today announced it will acquire the former OMNIMAX Theatre located in the Duluth Entertainment Convention Center (DECC) adjacent to the company’s 10-screen Duluth Cinema at 300 Harbor Drive. Marcus Theatres will convert the domed theatre, which closed in April 2011, to a nearly 70-foot-wide UltraScreen® auditorium. This will be the fourteenth UltraScreen in the company’s circuit. Construction on the project will begin shortly, with an anticipated opening in late spring 2012.

“Powerful MDX4K digital projection technology will present movies released in 4K in even higher resolution with more definition and depth. The MDX4K system will also be ready for films produced to take advantage of faster digital projection speeds for more dramatic special effects and impeccable camera shots. Every seat in the new UltraScreen auditorium will also be replaced with luxurious, high-back memory-foam chairs designed for the ultimate in relaxation and comfort,” said Olson.

DECC Executive Director Dan Russell said the DECC had been in negotiations with Marcus Theatres for several months to make this new attraction a reality.

“There isn’t a better theatre operator in the country than Marcus Theatres, and the DECC is pleased to help them expand on the great success they’ve had with the Duluth 10 as they transform the OMNIMAX Theatre into an UltraScreen auditorium,” said Russell. “This not only gives Duluthians and visitors an exciting new entertainment option, it also ensures that the reuse of the former OMNIMAX Theatre will continue to help strengthen our downtown.”

Olson said the glass wall connecting the current OMNIMAX lobby area with the Duluth Cinema will be removed. “A new box office for both the existing screens as well as the new UltraScreen will be re-located to the current OMNIMAX lobby. The existing Duluth 10 theatre lobby will be re-carpeted and will now feature self-service soda stations, which is extremely popular with our guests at other Marcus Theatres locations.”

“The most unique and exciting new amenity will be the addition of a Take Five lounge. A liquor license will be applied for and if granted in March, we will design and install a full-service cocktail lounge, serving a complete selection of mixed drinks and imported beers, as well as a variety of appetizers, pizza and finger foods. The lounge will be open to non-theatre-going patrons as well as moviegoers. The new lounge will seat between 50 and 60 guests and will feature both tables and chairs for dining, as well as luxuriously appointed soft leather seating for sipping a cocktail before or after a movie,” added Olson.

The OMNIMAX, which opened in 1996, was owned and operated by the Duluth Entertainment Convention Center. Marcus Theatres will maintain a lease agreement with the owner. The financial details of the transaction were not disclosed.

ABOUT MARCUS THEATRES
Marcus Theatres®, a division of The Marcus Corporation, is the sixth largest theatre circuit in the United States. With the acquisition of the Duluth OMNIMAX, the company will own or operate 696 screens at 56 locations in Wisconsin, Illinois, Iowa, Minnesota, Nebraska, North Dakota and Ohio. www.marcustheatres.com.

Joe Kleimanhttp://wwww.themedreality.com
Raised in San Diego on theme parks, zoos, and IMAX films, InPark's Senior Correspondent Joe Kleiman would expand his childhood loves into two decades as a projectionist and theater director within the giant screen industry. In addition to his work in commercial and museum operations, Joe has volunteered his time to animal husbandry at leading facilities in California and Texas and has played a leading management role for a number of performing arts companies. Joe previously served as News Editor and has remained a contributing author to InPark Magazine since 2011. HIs writing has also appeared in Sound & Communications, LF Examiner, Jim Hill Media, The Planetarian, Behind the Thrills, and MiceChat His blog, ThemedReality.com takes an unconventional look at the attractions industry. Follow on twitter @ThemesRenewed Joe lives in Sacramento, California with his wife, dog, and a ghost.
Share
Facebook
Twitter
Linkedin
Email
Print
WhatsApp
Pinterest
ReddIt
Tumblr
Previous articleWhiteWater West Headed to Lotte World With $22 Million of Aquatic Fun
Next articleSchlitterbahn Expands in South Padre Island with Indoor Waterpark Hotel