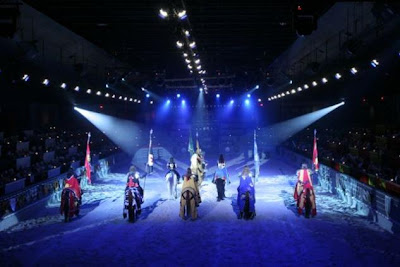 Myrtle Beach, SC, USA (April 19, 2012) /PRNewswire/ — Medieval Times Dinner & Tournament Myrtle Beach invites guests to travel back to the 11th Century this June with the premiere of a new show – the first since 2008.

While the show offers many new elements, some of the most popular elements remain. The live show will still feature two- and four-legged performers with a utensil-free meal served in a castle-inspired arena.

Approximately two years in the making, the new live production presents even more audience favorites such as live jousting, sword fights, horsemanship and falconry. Guests are taken back in time and encouraged to cheer for one of six “Knights of the Realm,” named after historic regions of medieval Spain.

In addition to a new story, the production includes new lighting, choreography and battle scenes, costumes, new horse dressage elements and a new musical score custom-created for Medieval Times, which was recorded in Kiev, Ukraine.

“In a sense, we’ve gone back to basics,” said Paco Perez – Luna, Myrtle Beach Medieval Times senior vice president. Guests will see a celebration of the horses, along with more action and elements of high drama. The streamlined plot allows more concentration on the action. “When we started to put pen to paper, we knew from the start we wanted to grab guests’ attention from the moment they take their seats. This led us to the creation of the opening moment, when Liberty Horse enters the arena.”

After the opening, guests will witness intricate battles, which are precisely planned sequences that have been practiced daily.

With authentic weaponry and enhanced armor, the new production presents non-stop action tied to the tempo of the music. And while there’s still a general theme of “good versus evil” throughout the show, guests will see much more of what they like most about the show – fight scenes that maintain the highest quality and safety standards.

Guests will also enjoy an upgraded menu for the utensil-free meal during the new show featuring a new score, costumes, characters, storyline and plot.

Joe Kleimanhttp://wwww.themedreality.com
Raised in San Diego on theme parks, zoos, and IMAX films, InPark's Senior Correspondent Joe Kleiman would expand his childhood loves into two decades as a projectionist and theater director within the giant screen industry. In addition to his work in commercial and museum operations, Joe has volunteered his time to animal husbandry at leading facilities in California and Texas and has played a leading management role for a number of performing arts companies. Joe previously served as News Editor and has remained a contributing author to InPark Magazine since 2011. HIs writing has also appeared in Sound & Communications, LF Examiner, Jim Hill Media, The Planetarian, Behind the Thrills, and MiceChat His blog, ThemedReality.com takes an unconventional look at the attractions industry. Follow on twitter @ThemesRenewed Joe lives in Sacramento, California with his wife, dog, and a ghost.
Share
Facebook
Twitter
Linkedin
Email
Print
WhatsApp
Pinterest
ReddIt
Tumblr
Previous articleToronto Zoo Loses AZA Accreditation
Next articleSmithsonian Wins Discovery’s Pink Slip in Space Shuttle Drag Race

The Simpsons in 4D opens in Myrtle Beach