Michael Severn Lamb Passes Away at 63 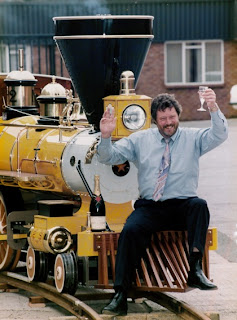 Michael was diagnosed with a rare form of cancer at the end of November 2011, but sadly lost his battle with the disease on February 7, 2012, aged 63. A celebration of his life, friends and accomplishments was held at a civil ceremony on February 16.

Michael was the son of Severn-Lamb founder Peter Severn Lamb and his wife Rita and was born in Stratford-upon-Avon. He began his career as an interior designer but joined the family business in 1975 as Chairman and Chief Executive following the untimely death of his father at the age of 53.

He was a truly larger than life character and under his leadership the company grew and prospered significantly. What had at one time been a relatively small model making company, which also built miniature railway equipment, developed into a major player in the leisure transportation business worldwide, supplying trains and other transport systems to places as close to home as Drayton Manor Theme Park as well as many others throughout the world, including for such famous names as the Walt Disney Company.

Under Michael’s dynamic leadership, the company built ever grander trains, as well as highly sophisticated monorail systems and specialist road vehicles, creating a fine reputation for its magnificent designs, attention to detail and the skill and expertise of its loyal workforce.

In 1995 Michael won the title of Businessman of the Year and during the same year Severn-Lamb won the Queen’s Award for Export, Michael accepting this prestigious award from Her Majesty the Queen at a ceremony at Buckingham Palace.

During the late 1990s and early 2000s the company enjoyed continued success although unfortunately during this period the challenges of the business took their toll on Michael’s health. On-going health issues led to his retirement as Chairman of Severn-Lamb in 2004, at which point his oldest son Patrick took over at the helm of the company.

In tribute to Michael, long-standing friend and industry colleague Colin Bryan, managing director of Drayton Manor Theme Park, said: “The connection with Severn-Lamb began in 1971 when they supplied us with their first Rio Grande train along with what were called Drayton coaches, which are still used today. Michael’s father was an excellent engineer and when Michael took over the company he showed a great ability to adapt what his father did to the changing requirements of the industry, as well as continuing to manufacture and develop the company and its products and services further.

“I’ve enjoyed a lot of discussions and great friendship with Michael over the years and now with his son Patrick at the helm, Severn-Lamb continues to help us with a variety of projects on the park and with various service and maintenance contracts. Our families always had a connectivity and continue to do so through the work they do for us.”

ABOUT SEVERN-LAMB
Severn-Lamb has been involved in designing, building and maintaining leisure and light urban transport systems since 1947. Based near Stratford-upon-Avon, England, (Shakespeare’s birthplace) the business continues to be family run and has built up an enviable reputation for exceptional quality and innovation in its chosen field.

Severn-Lamb’s products can be found operating in more than 50 countries, many for more than 40 years.  www.severn-lamb.com

Joe Kleimanhttp://wwww.themedreality.com
Raised in San Diego on theme parks, zoos, and IMAX films, InPark's Senior Correspondent Joe Kleiman would expand his childhood loves into two decades as a projectionist and theater director within the giant screen industry. In addition to his work in commercial and museum operations, Joe has volunteered his time to animal husbandry at leading facilities in California and Texas and has played a leading management role for a number of performing arts companies. Joe previously served as News Editor and has remained a contributing author to InPark Magazine since 2011. HIs writing has also appeared in Sound & Communications, LF Examiner, Jim Hill Media, The Planetarian, Behind the Thrills, and MiceChat His blog, ThemedReality.com takes an unconventional look at the attractions industry. Follow on twitter @ThemesRenewed Joe lives in Sacramento, California with his wife, dog, and a ghost.
Share
Facebook
Twitter
Linkedin
Email
Print
WhatsApp
Pinterest
ReddIt
Tumblr
Previous articleFormer Newseum Head Joe Urschel to Lead New National Law Enforcement Museum
Next articleDisney Parks and Resorts’ Alan Bruun and Tom Zofrea to Speak at TEA Summit March 16