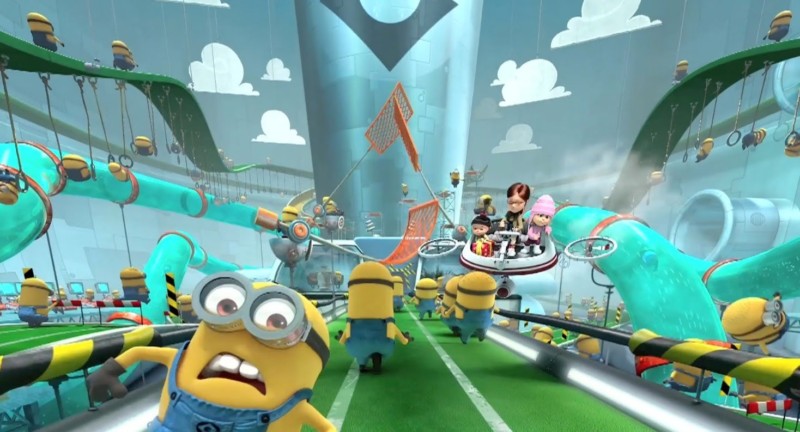 “The irreverent humor, endearing characters and storyline that have captivated movie-goers worldwide makes ‘Despicable Me’ a perfect match for our theme park,” said Larry Kurzweil, President, Universal Studios Hollywood. “This imaginative new ride will not only take guests on a hilarious and heartwarming adventure that captures the spirit of the film, but will also invite them to embrace their ‘Inner Minion’ – that mischievous alter-ego that hides within all of us.  As the film franchise continues to break new ground as a modern day classic, so too will ‘Despicable Me: Minion Mayhem’ as yet another marquee Universal Studios Hollywood ride.”

Voiced by the film’s original stars, the fully immersive motion-simulator ride will feature the quirky but lovable cast of characters that have resonated with audiences across the globe: super-villain Gru (Steve Carell), his adorable girls Margo (Miranda Cosgrove), Edith (Dana Gaier) and Agnes (Elsie Fisher), Dr. Nefario (Russell Brand), and an army of unpredictably entertaining Minions.

“We’re so excited to introduce a new experience that truly reflects all the heart, humor and emotion audiences have come to love about ‘Despicable Me,’” said Chris Meledandri, founder and CEO of Illumination Entertainment. “Fans of the film can now have fun and interact with their favorite ‘Despicable Me’ characters in a way they haven’t been able to before.”

The “Despicable Me” ride will welcome guests to Minion mayhem via an elaborately themed neighborhood, recreated with precision to mirror the familiar white picket fence homes, Gru’s ominous house and Ms. Hattie’s Home for Girls as if lifted from the film and surreptitiously placed within Universal Studios Hollywood.  Whimsically themed queues, clever preshow videos and comedic dialogue will set up the fundamental plot: Gru schemes to create as many mischievous Minions as possible from human recruits.

The ride will transport guests into Gru’s iconic house where they will meander through his living room and encounter many memorable visual elements from the movie, including the moon-shrinking SR-6 shrink ray, while zig zaging along a zany escapade through Gru’s super-villain laboratory. The exciting journey will send guests on a swerving, bouncing and plunging excursion through the frantically humorous Minion training mission, all the while donning specially-designed 3D “Minion Goggles.”  A post-show Minion dance party will culminate the adventure inviting guests to strut their stuff in an impromptu must-do Minion dance party.

“Super Silly Fun Land,” an all-new elaborate kids play zone unique to Universal Studios Hollywood, will debut adjacent to “Despicable Me:  Minion Mayhem.”  The colorfully themed, interactive Minion-inspired outdoor venue, a literal interpretation of the carnival from the film, will delight younger guests with a multitude of fountains, water play areas and splash pools. A nearby dry zone will invite guests to climb, crawl, jump and slide – while a Minion themed ride will soar and spin guests around for a 360-degree view of “Super SillyFun Land” aboard a fleet of amusing ride vehicles.

Combined, “Despicable Me: Minion Mayhem” and “Super Silly Fun Land” will represent a newly defined immersive environment within the theme park, reimagined to fully engage guests in the exciting and vibrant world of Gru and his Minions.

Joe Kleimanhttp://wwww.themedreality.com
Raised in San Diego on theme parks, zoos, and IMAX films, InPark's Senior Correspondent Joe Kleiman would expand his childhood loves into two decades as a projectionist and theater director within the giant screen industry. In addition to his work in commercial and museum operations, Joe has volunteered his time to animal husbandry at leading facilities in California and Texas and has played a leading management role for a number of performing arts companies. Joe previously served as News Editor and has remained a contributing author to InPark Magazine since 2011. HIs writing has also appeared in Sound & Communications, LF Examiner, Jim Hill Media, The Planetarian, Behind the Thrills, and MiceChat His blog, ThemedReality.com takes an unconventional look at the attractions industry. Follow on twitter @ThemesRenewed Joe lives in Sacramento, California with his wife, dog, and a ghost.
Share
Facebook
Twitter
Linkedin
Email
Print
WhatsApp
Pinterest
ReddIt
Tumblr
Previous article
Texas State History Museum Relies on Electrosonic to “Shipwreck” Visitors
Next article
Mousetrappe Wins VES Award for Space Shuttle Atlantis