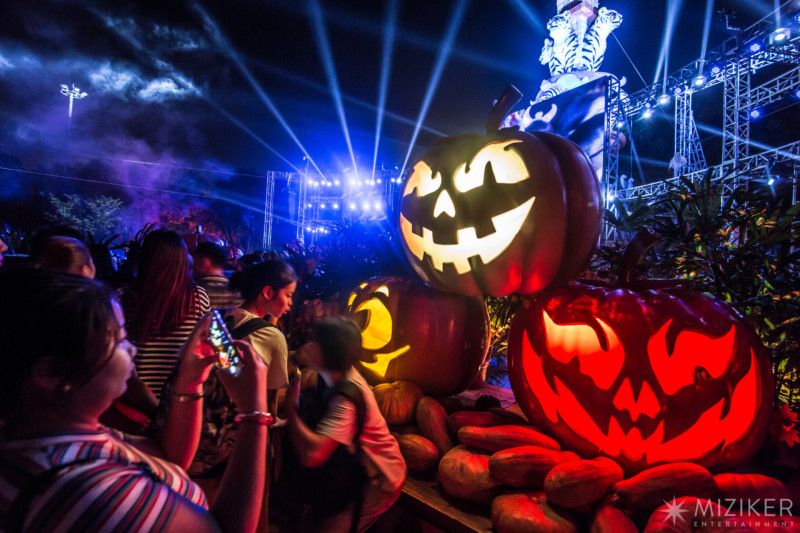 Under turnkey contract to Chimelong Paradise, Miziker Entertainment collaborated closely with park director John Smart and his team who have produced Halloween shows in-house for several years. Miziker Entertainment’s contribution consisted of three zone overlays – Pumpkin Harvest, Haunted Woods, and Scarecrow Alley – with large set pieces, lighting design, audio design, performers and projected media, a rapids ride overlay called Voodoo Bayou, and enhancements to two horror mazes. Miziker devised three levels of frights at the park – from Spooky for all-ages, to Scary for everyone over 10, to Terrifying intended only for those who dare. The project timeline was six months from first conversations to project delivery.

“It was a great match: we’re longtime Halloween specialists at Miziker Entertainment, and Halloween is a huge seasonal draw around the world now,” said Miziker. “Theme parks in Asia and Europe as well as North America are bringing in Halloween visitors for special, scary fun times.”

Key to this project was Miziker senior art director and “Halloween Guru” Nix Herrera, whom the company depends on when creating spooky, scary and terrifying events for clients around the globe. Starting as a teenager at Skull Kingdom (Orlando), Nix has spent two decades learning and perfecting the art of the haunt, from acting to scenic design, makeup, costuming and more. His experience includes five years in pre-production on Halloween Horror Nights at Universal Studios Florida, and eight years as a leading Halloween artist for Ocean Park Hong Kong. “It is my joy and mission to bring Halloween to the world,” said Nix. “There is something very exciting about the unique way China is adapting and adopting the Halloween tradition and making it their own, in ways that will influence the West in turn.”

Miziker also created “Jack-o’-lantern Night,” a small projection mapping display that brought pumpkins to life to sing a song about their role in Halloween. “Not a lot of people know that jack-o’-lanterns are intended to scare away evil spirits,” said Ryan Miziker. “We wrote and produced a fun Halloween song for Chimelong, and this child-friendly projection display introduces a bit of Western Halloween tradition and gives kids in China a little insight into one of our oldest customs.”

Miziker’s three levels of frights at Scare-adise was indicated with graphics on the attraction map for guests, and with signage and color coding in the park itself – so that the park’s family and teen audiences could navigate accordingly. The dramatic Pumpkin Archway, celebrating both Halloween and the harvest season, provided a sense of arrival and was a favorite photo op. Themed environments included Scarecrow Alley, Haunted Woods, and Pumpkin Harvest. Themed attraction overlays included Voodoo Bayou, Zombie Train and Flashlight Maze. Technical components of each overlay were designed to facilitate quick installation in the existing space, teardown and storage and included point source speakers, projectors and lighting fixtures in addition to set pieces. As part of their turnkey project delivery Miziker Entertainment also provided costumes for the performers, media production, lighting design, sound design, custom background sound design and original music.

Chimelong Group has established itself as an international leader in the theme park business, and has opened five theme parks. Chimelong Paradise, in Guangdong Province, was the second, opening in 2006 as part of a resort development. The park is 60 hectares in area, features more than 60 rides and attractions, and attracted nearly 4 million attendance in 2015.

“Holiday overlays are a fast and fun way to make a transformation and well within the reach of a regional operator – whether augmenting an existing event, as we did with Scare-adise, or creating an event from scratch. Customized set pieces, parkwide lighting and sound design can be tailored to benefit parks of all sizes and budgets and have a great impact without the need for permanent construction,” said Ryan Miziker. Miziker Entertainment president and producer Charlotte Huggins said, “Looking at our two showcase projects of 2016 – Scare-adise for Chimelong Paradise, a holiday-themed overlay for a dynamic regional park, and the Journey of Lights electrical parade for Chimelong Ocean Kingdom, a big, complex job for an international destination park – we’ve demonstrated our company’s ability to address a wide range of project scopes and sizes.”

Miziker Entertainment executives will attend the 2016 IAAPA Attractions Expo in Orlando Nov. 15-18 to meet with clients and creative partners

Joe Kleimanhttp://wwww.themedreality.com
Raised in San Diego on theme parks, zoos, and IMAX films, Joe Kleiman would expand his childhood loves into two decades as a projectionist and theater director within the giant screen industry. In addition to his work in commercial and museum operations, Joe has volunteered his time to animal husbandry at leading facilities in California and Texas and has played a leading management role for a number of performing arts companies. Joe has been News Editor and contributing author to InPark Magazine since 2011. HIs writing has also appeared in Sound & Communications, LF Examiner, Jim Hill Media, and MiceChat. His blog, ThemedReality.com takes an unconventional look at the attractions industry. Follow on twitter @ThemesRenewed Joe lives in Sacramento, California with his fiancé, two dogs, and a ghost.
Share
Facebook
Twitter
Linkedin
Email
Print
WhatsApp
Pinterest
ReddIt
Tumblr
Previous articleDNP Introduces the SnapLab+ SL620A™ Photo Printing Kiosk Solution for Amusement and Attractions Retailers
Next articleMiziker Entertainment Brings Decades of Nighttime Parade Expertise to Chimelong Ocean Kingdom’s Journey of Lights