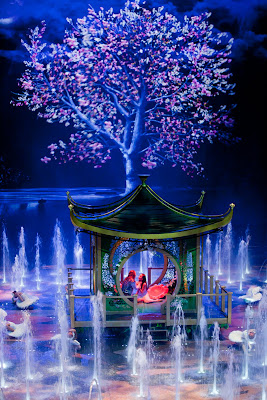 Macau — Sharks puppeteered by SCUBA divers, heart-stopping high dives, motorbike stunts symbolising time travel, pagodas and boats that emerge from submarine theatre ‘wings’ and 77 performance artists from 18 countries around the world; Franco Dragone’s newest spectacular has been 5 years in the planning, 2 years of rehearsal and cost approximately £160 million. Surrounded in mystery and much anticipation, The House of Dancing Water launched on 16th September, before opening its doors to an eagerly-waiting public the following day, at the City of Dreams, Macau.

The Dancing Water Theater was designed by Pei Partnership and is a 270-degree theater-in-the-round, with a central stage diameter of about 20 metres. The theatre houses around 260 automated fountains that spurt water up to 18 metres in the air, and a total of 11 hydraulic stage lifts and vomitory lifts that enable an artistic flow in performance from aquatic to conventional stage. Contracted by Theatre Projects, Stage Technologies provided a 141-axis whole house control and engineering system for the purpose-built venue. The system includes a 40-unit track and trolley system, which can transport up to 250kg at 3.5m/sec, allowing mobile flying axes to pitch aerialists over the heads of the audience and launch performers from Russian swings into the watery depths below. Stage Technologies lineset winches are rated to 2,000kg at 2½m/s, resulting in the capacity for incredibly fast changeovers of Dragone’s characteristically complex and beautiful, but sometimes load-heavy sets. 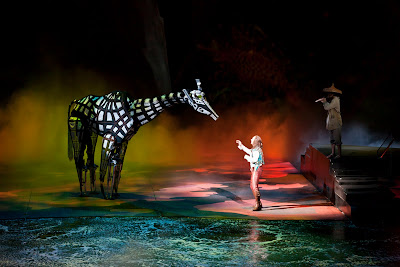 The 100m by 60m grid mirrors the entire theatre area, which is almost completely covered by ‘the world’s largest commercial pool’. This circular pool holds approximately 3.7 million gallons of water allowing the latest genre of aqua performance art to reach new creative horizons. The technical side of the performance required plotting and control from two fixed Acrobat∙G6s and two portable Nomads and the show control is further enhanced by an additional four handheld Solos.

In parallel with the installation in Macau, Stage Technologies also provided equipment for Dragone’s rehearsals which were taking place at their home base in Belgium. The rehearsal studio contained two tracks and trolleys and eight point hoists, mimicking the main system’s functionality and allowing the automation programmers to rehearse and programme the show act by act, both with real world movements and also in an offline, virtual, 3D configuration. The rehearsal control system used six local control joysticks that allowed simple and safe control of any winch within the system by touch screen selection of the axis number. The Stage Technologies teams, both in Macau and at the training venue in Belgium, worked in close conjunction with each other, the Dragone technical staff and Steve Colley, the head of automation and rigging at Dragone, now technical director at the venue.

Judith Rubin
Judith Rubin ([email protected]) is a leading journalist, publicist, strategist, blogger, content marketing specialist and connector in the international attractions industry. She excels at writing about all aspects of design and technical design, production and project management. Areas of special interest include AV integration and show control, lighting design and acoustics, specialty cinema, digital video and world’s fairs. Judith has ties to numerous industry organizations. From 2005-2020 she ran communications, publications and social media for the Themed Entertainment Association (TEA). In 2013, she was honored with the TEA Service Award. She was development director of IMERSA, and co-chair of the 2014 IMERSA Summit. She was publicist for the Large Format Cinema Association in the 1990s, now part of the Giant Screen Cinema Association (GSCA) and has also contributed to the publications of PLASA, IAAPA and the International Planetarium Society. Already making her mark as a magazine and book editor, Judith joined World’s Fair magazine in 1987, which introduced her to the attractions industry. Launching as a freelancer in the mid 1990s she has contributed to dozens of publications and media outlets including Funworld, Lighting&Sound America, Sound & Communications, Urban Land, The Raconteur and The Planetarian. She joined InPark in 2010. Judith earned a Bachelor of Fine Arts from Pratt Institute. She has lived in New York City and the San Francisco Bay Area, and now makes her home in Saint Louis, where she is active in the local arts and theater community.
Share
Facebook
Twitter
Linkedin
Email
Print
WhatsApp
Pinterest
ReddIt
Tumblr
Previous articleHarkness Screens Digital Screen Selector aids theater operators
Next articleDiscovery Cove Adds The Grand Reef in 2011