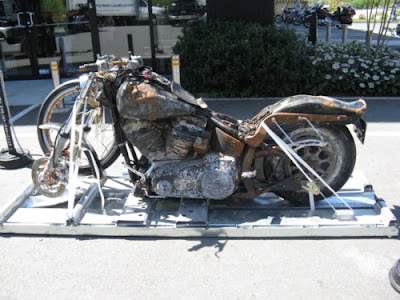 Milwaukee, WI, USA (May 25, 2012) /PRNewswire/ — A Harley-Davidson motorcycle recovered on the coast ofBritish Columbia after drifting for more than a year and 4,000 miles across the Pacific Ocean following last year’s Japanese Tsunami will be preserved by the Harley-Davidson Museum in Milwaukee as a memorial to the tragedy that claimed more than 15,000 lives, in accordance with the wishes of its owner, Ikuo Yokoyama.

The remarkable story of the 2004 FXSTB Softail Night Train motorcycle’s survival and recovery by Canadian Peter Mark made international headlines after he found it washed ashore on a remote beach onBritish Columbia’s Graham Island at low tide. Mark discovered the motorcycle, still bearing its Japanese license plate, along with several other items in the remains of an insulated cargo van container where the motorcycle was being stored by Yokoyama prior to the Tsunami that struck Japan on March 11, 2011.

Working with news agencies and representatives from Deeley Harley-Davidson Canada and Harley-Davidson Japan, contact was made with 29-year-old Yokoyama, who lost his home and currently lives in temporary housing in Miyagi Prefecture, Japan. Harley-Davidson offered to return his bike. But still struggling to rebuild his life in the aftermath of the disaster, Yokoyama respectfully declined. Although grateful for the offer to repatriate his motorcycle and touched by the outpouring of support from Harley riders around the world, Yokoyama requested to have it preserved in the Harley-Davidson Museum in honor of those whose lives were lost or forever changed by the disaster.

“It is truly amazing that my Harley-Davidson motorcycle was recovered in Canada after drifting for more than a year,” said Yokoyama. “I would like to take this opportunity to express my heartfelt appreciation toPeter Mark, the finder of my motorcycle. Due to circumstances caused by the disaster, I have been so far unable to visit him in Canada to convey my gratitude.

“Since the motorcycle was recovered, I have discussed with many people about what to do with it. I would be delighted if it could be preserved in its current condition and exhibited to the many visitors to the Harley-Davidson Museum as a memorial to a tragedy that claimed thousands of lives. I am very grateful to Harley-Davidson for offering me an opportunity to visit the museum, and I would like to do that when things have calmed down. At the same time, I would like to meet Peter, who recovered my motorcycle, to express my gratitude. Finally, I would like to thank all people around the world once again for their wholehearted support of the areas hit by the earthquake and Tsunami. I would like to ask them to help convey messages from the Japanese people about the tragedy of the Great East Japan Earthquake, which was a disaster of historic proportions.”

“My heart really goes out to Ikuo Yokoyama and all the survivors of the Tohoku earthquake and Tsunami for everything that was taken from them. I cannot even begin to comprehend the loss of family, friends and community,” said Mark. “I think it is fitting that the Harley which was swept across the Pacific Ocean by the Tsunami will end up in the Harley-Davidson Museum as a memorial to that tragic event. It has an interesting and powerful story to convey preserved in its current state.

“I look forward to one day meeting Mr. Yokoyama face to face. I would also like to express my gratitude to all those that have taken part in the retrieval of the motorcycle, especially Ralph Tieleman, Steve Drane, and Deeley Harley-Davidson Canada.”

The motorcycle was recovered by Mark with the help of friends and transported to Victoria with support from Ralph Tieleman and Steve Drane of Steve Drane Harley-Davidson. It has since been transferred to Deeley H-D Canada in Vancouver. Plans for its transportation to and display at the Harley-Davidson Museum are being developed.

Joe Kleimanhttp://wwww.themedreality.com
Raised in San Diego on theme parks, zoos, and IMAX films, InPark's Senior Correspondent Joe Kleiman would expand his childhood loves into two decades as a projectionist and theater director within the giant screen industry. In addition to his work in commercial and museum operations, Joe has volunteered his time to animal husbandry at leading facilities in California and Texas and has played a leading management role for a number of performing arts companies. Joe previously served as News Editor and has remained a contributing author to InPark Magazine since 2011. HIs writing has also appeared in Sound & Communications, LF Examiner, Jim Hill Media, The Planetarian, Behind the Thrills, and MiceChat His blog, ThemedReality.com takes an unconventional look at the attractions industry. Follow on twitter @ThemesRenewed Joe lives in Sacramento, California with his wife, dog, and a ghost.
Share
Facebook
Twitter
Linkedin
Email
Print
WhatsApp
Pinterest
ReddIt
Tumblr
Previous articleThe Dream of Manned Spaceflight Continues as Space Camp Turns 30
Next articleTEA and AECOM to release TEA/AECOM 2011 Theme Index: Global Attractions Attendance Report