The Dream of Manned Spaceflight Continues as Space Camp Turns 30 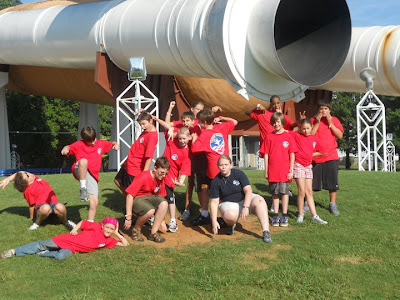 Huntsville, AL, USA (May 24, 2012) /PRNewswire-USNewswire/ —  June 15, 2012, marks the 30th anniversary of  Space Camp®, the internationally-recognized program that today counts four astronauts, one cosmonaut, and nearly 600,000 other alumni, many in careers on the frontiers of technology.

The U.S. Space & Rocket Center (USSRC) in Huntsville, Alabama – home of Space Camp – is hosting a weekend of family-friendly activities from June 14-16, 2012, as a Space Camp alumni reunion and community celebration. The spotlight event is the Space Camp Hall of Fame Induction Ceremony and Dinner on Friday evening at 6 p.m. in the Saturn V Hall at the USSRC. Captain Robert “Hoot” Gibson, U.S. Navy (Ret.) and five-time Shuttle astronaut, International Space Station (ISS) Flight Director Ed Van Cise and Liz Warren, Ph.D., ISS Physiologist, along with Meteorologist Stephanie Abrams from The Weather Channel, will be inducted into the Space Camp Hall of Fame at the ceremony. Other special events include the Retro Night Social with a special showing of Space Camp the movie and a silent auction at the Space Camp Hall of Fame Dinner to benefit the Scholarship Fund, which supports financial scholarships for eligible students.

“We are proud to welcome home alumni for the 30th anniversary celebration of Space Camp and the 2012 Space Camp Hall of Fame,” said Dr. Deborah Barnhart, CEO and Executive Director of the USSRC. “We have a fun agenda planned for alumni and look forward to meeting their families and hearing their stories of success since attending.”

Space Camp was the vision of Dr. Wernher von Braun, the pioneer of America’s space program and architect of the Saturn V rocket. Based on his dream of putting children and adults through astronaut training at the U.S. Space & Rocket Center in Huntsville, nearly 600,000 trainees have graduated from the program.

The mission of Space Camp has always been to inspire, motivate and develop a greater affinity for learning, particularly in the areas of science, technology, engineering and math (STEM) education. Data from student surveys document the educational benefits of the program. The U.S. Space & Rocket Center surveyed nearly 10,000 Space Camp trainees who attended between 1987 and 1992. More than 90% of the alumni said they took more science courses particularly physics and chemistry in the years following their camp attendance and more than 90% also reported taking more math courses. Nearly 75% said they learned about their current careers from Space Camp.

This supports a competent, qualified workforce for hundreds of companies and for the U.S. government. Today alumni work for companies like Boeing, Honeywell Aerospace, Teledyne Brown, ATK, Pratt & Whitney Rocketdyne, Lockheed Martin and many others. Thousands more found their inspiration at Space Camp to work for the government on world-class programs like the Space Shuttle Program, the International Space Station, the Hubble Telescope, and numerous other aerospace, defense and technology projects. Dottie Metcalf Lindenberger flew aboard the Space Shuttle Discovery on STS-131 in April, 2010, becoming the first Space Camp alumna to go into space. Other astronaut alumni are Serena Aunon and Kathleen Rubins, NASA; Samantha Cristoforetti, European Space Agency; and Russian cosmonaut Aleksandr Lazutkin.

If Space Camp has touched your life or you are a graduate of the program, connect with other alumni at www.spacecamp.com/community or for tickets and a complete listing of activities planned for the anniversary weekend, visit www.spacecamp.com/30th.

Joe Kleimanhttp://wwww.themedreality.com
Raised in San Diego on theme parks, zoos, and IMAX films, InPark's Senior Correspondent Joe Kleiman would expand his childhood loves into two decades as a projectionist and theater director within the giant screen industry. In addition to his work in commercial and museum operations, Joe has volunteered his time to animal husbandry at leading facilities in California and Texas and has played a leading management role for a number of performing arts companies. Joe previously served as News Editor and has remained a contributing author to InPark Magazine since 2011. HIs writing has also appeared in Sound & Communications, LF Examiner, Jim Hill Media, The Planetarian, Behind the Thrills, and MiceChat His blog, ThemedReality.com takes an unconventional look at the attractions industry. Follow on twitter @ThemesRenewed Joe lives in Sacramento, California with his wife, dog, and a ghost.
Share
Facebook
Twitter
Linkedin
Email
Print
WhatsApp
Pinterest
ReddIt
Tumblr
Previous articleEgyptian Girl Moves Into New Digs Across from USC
Next articleMotorcycle That Floated Across Pacific After Japan Tsunami to Join Collection of Harley-Davidson Museum