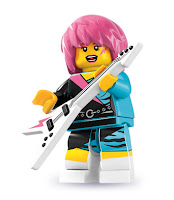 The LEGO Summer Brickation will showcase the best of what the LEGO group has to offer. It will enable children and adults to benefit from a fun, hands-on experience of building and creating LEGO bricks and products. Different activity areas will be featured, providing families enjoyment in everything from building, games and challenges, to photo opportunities with life size LEGO models.

“The LEGO brand is one of the more well known brands in the world offering children the opportunity to use their imaginations to create their own LEGO models while having fun and learning all at the same time,” said O’Neil McCoy, general manger for Broadway at the Beach. “With the addition of LEGO Summer Brickation at Broadway at the Beach, we are able to provide our visitors with a fun and new way to experience the LEGO brand first-hand.”

The LEGO Summer Brickation is only appearing in four markets across the United States. The location at Broadway at the Beach is the only one in the Carolinas. Other locations include Branson, Mo.; Lake Tahoe, Calif.; and Traverse City, Mich.


About The LEGO Group
The LEGO Group is a privately held, family-owned company, based in Billund, Denmark. It was founded in 1932 and today the group is one of the world’s leading manufacturers of play materials for children, employing approximately 9,000 people globally. The LEGO Group is committed to the development of children’s creative and imaginative abilities. LEGO products can be purchased in more than 130 countries.

Joe Kleimanhttp://wwww.themedreality.com
Raised in San Diego on theme parks, zoos, and IMAX films, InPark's Senior Correspondent Joe Kleiman would expand his childhood loves into two decades as a projectionist and theater director within the giant screen industry. In addition to his work in commercial and museum operations, Joe has volunteered his time to animal husbandry at leading facilities in California and Texas and has played a leading management role for a number of performing arts companies. Joe previously served as News Editor and has remained a contributing author to InPark Magazine since 2011. HIs writing has also appeared in Sound & Communications, LF Examiner, Jim Hill Media, The Planetarian, Behind the Thrills, and MiceChat His blog, ThemedReality.com takes an unconventional look at the attractions industry. Follow on twitter @ThemesRenewed Joe lives in Sacramento, California with his wife, dog, and a ghost.
Share
Facebook
Twitter
Linkedin
Email
Print
WhatsApp
Pinterest
ReddIt
Tumblr
Previous articleMummies of the World Makes Texas Debut at San Antonio’s Witte Museum
Next articleJFK and Newark Airports Employ Virtual Customer Service Rep from AirportOne.com