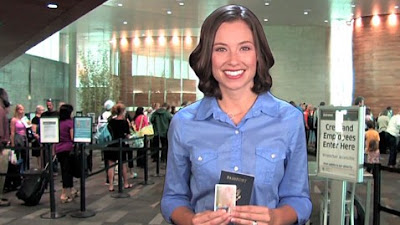 The Port Authority of New York and New Jersey has retained Airus Media (AirportOne.com) to produce airport virtual assistants to enhance customer service at airport welcome centers by answering basic and routine questions asked by arriving passengers. The avatar’s are essentially lifelike virtual mannequins (similar to holograms) that are extremely effective in attracting passenger attention and delivering a clear and consistent message. The hologram like virtual assistant truly captivates its audience, which also makes it a highly effective advertising and public relations tool.

Initially, three prototype airport virtual assistants will be placed at the John F. Kennedy International, Newark Liberty International, and LaGuardia Airports. It is anticipated that the prototypes will be extremely successful, and the next step will be for the Authority to install more advanced virtual assistants that can respond to questions, support several different languages, and ultimately provide information as complex as gates and flight times.

According to Patrick Bienvenu, Chief Operations Officer at AirportOne.com, and creator of AVA (the airport avatar) “the sky is the limit with what AVA can do and say”. Mr. Bienvenu says that the technology exists for fully interactive versions of the AVATAR that can respond to passenger questions as complex as location of departure gates and departure times, when specifically queried by a passenger.

The applications for AVA (Airport Virtual Assistant) seem to be limitless at airports and other venues, according to Mr. Bienvenu. Airus Media is currently in the process of developing virtual assistants, presenters, and mannequins for numerous clients.

Airus Media, Inc., located in Tampa, FL, is the first firm to produce and manufacture AVA in the US. Airus Media also makes AVATARs, hologram like virtual assistants, virtual mannequins, and virtual presenters for use in numerous other venues, such as stadiums, convention centers, train stations, subways, shopping centers, retail stores, museums – or wherever there is a need for a crowd stopping advertising or public information medium.airportONE.com … the airport store manufacturers and distributes a wide variety of airport crowd and traffic control equipment.

Joe Kleimanhttp://wwww.themedreality.com
Raised in San Diego on theme parks, zoos, and IMAX films, Joe Kleiman would expand his childhood loves into two decades as a projectionist and theater director within the giant screen industry. In addition to his work in commercial and museum operations, Joe has volunteered his time to animal husbandry at leading facilities in California and Texas and has played a leading management role for a number of performing arts companies. Joe has been News Editor and contributing author to InPark Magazine since 2011. HIs writing has also appeared in Sound & Communications, LF Examiner, Jim Hill Media, and MiceChat. His blog, ThemedReality.com takes an unconventional look at the attractions industry. Follow on twitter @ThemesRenewed Joe lives in Sacramento, California with his fiancé, two dogs, and a ghost.
Share
Facebook
Twitter
Linkedin
Email
Print
WhatsApp
Pinterest
ReddIt
Tumblr
Previous articleMyrtle Beach’s Broadway on the Beach Home to LEGO Summer Brickation
Next articleIconic Letters from California Adventure Begin New Life at State Fairgrounds in Sacramento