Baltimore, MD, USA — National Aquarium has announced the addition of Blacktip Reef, a new exhibit that will open in summer 2013 in Baltimore. This coral-filled exhibit, replicating a salt-water Indo-Pacific ocean habitat, will feature animals new to National Aquarium, including blacktip reef sharks, reticulated whiptail rays and ornate wobbegong sharks, as well as some of National Aquarium’s most beloved animals, including Calypso, the 400-pound green sea turtle, and zebra sharks Zeke and Zoe.

“Blacktip Reef is going to be an incredible addition to National Aquarium and one that will continue to inspire guests to preserve and protect our oceans,” said John Racanelli, National Aquarium CEO. “People travel around the globe to experience reefs in the Indo-Pacific region. Come next summer, they won’t have to travel nearly as far to experience some of the world’s most beautiful and essential aquatic treasures.”

Guests visiting National Aquarium, Baltimore, will be able to enjoy the new $12.5 million exhibit from many vantage points, including a new floor-to-ceiling pop-out viewing window that allows guests to virtually step inside the exhibit and come face-to-face with the animal species and corals. Blacktip Reef will be located in the heart of National Aquarium’s Pier 3 Pavilion, where the Wings in the Water exhibit currently resides. 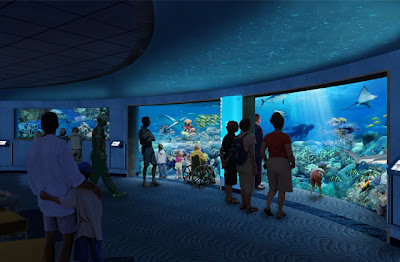 “The ocean has many different types of habitats and coral reefs are like the ocean’s Grand Central Station,” said Jack Cover, National Aquarium general curator. “This incredible ecosystem really gives you greater context, showcasing biodiversity and the relationships among the diverse plants and animals. It’s a complex living structure that continues to build on itself.”

The namesake animal of the new exhibit, the blacktip reef shark, is a smaller shark species that can grow to about six feet in length and bears distinctive black tips on its pectoral, dorsal, pelvic and caudal fins. Blacktip reef sharks are found in the shallow waters of the Indo-Pacific, hanging around reefs to feed. These sharks are sleek, attractive, fast-moving and hunt cooperatively in groups.

“Blacktip Reef will show our guests that sharks not only play a key role in reef ecosystems, but are a thing of beauty that are very important to ocean health,” said Cover.

Guests will also have the opportunity to engage with National Aquarium experts through daily interactive Blacktip Reef diver presentations and shark feedings. Informative computer touchscreens throughout the exhibit will provide photos, videos and further facts about the reef ecosystem. At the end of their Blacktip Reef visit, guests can share their experience on a new interactive wall by uploading photos and comments, and by making personal commitments to ocean health.

Before renovations begin in September, guests are invited to visit the Wings in the Water exhibit to say farewell to the barracuda and cownose, southern and roughtail rays that will be traveling to their new homes at the Georgia Aquarium and Ripley’s Aquarium. Guests will still be able to enjoy the bonnethead sharks, hogfish and tarpon in the National Aquarium’s Atlantic Coral Reef exhibit, where they will be relocated.

National Aquarium
National Aquarium inspires conservation of the world’s aquatic treasures. It champions environmental initiatives by engaging with visitors, volunteers, education groups and schools to actively participate in the preservation of the world’s natural resources and living-systems. National Aquarium, in Washington, D.C. and Baltimore, MD, delivers meaningful experiences through its engaging living collections; our science-based education programs and our hands-on experiences in the field from the Chesapeake Bay to Costa Rica; and partnerships and alliances with like-minded organizations around the world. For more information on National Aquarium, visit http://www.aqua.org.

Joe Kleimanhttp://wwww.themedreality.com
Raised in San Diego on theme parks, zoos, and IMAX films, Joe Kleiman would expand his childhood loves into two decades as a projectionist and theater director within the giant screen industry. In addition to his work in commercial and museum operations, Joe has volunteered his time to animal husbandry at leading facilities in California and Texas and has played a leading management role for a number of performing arts companies. Joe has been News Editor and contributing author to InPark Magazine since 2011. HIs writing has also appeared in Sound & Communications, LF Examiner, Jim Hill Media, and MiceChat. His blog, ThemedReality.com takes an unconventional look at the attractions industry. Follow on twitter @ThemesRenewed Joe lives in Sacramento, California with his fiancé, two dogs, and a ghost.
Share
Facebook
Twitter
Linkedin
Email
Print
WhatsApp
Pinterest
ReddIt
Tumblr
Previous articleRadio City Christmas Spectacular Returning to Grand Ole Opry
Next article$1 Million Grant From Tiffany Foundation to Revitalize Presidio’s Historic Battery East