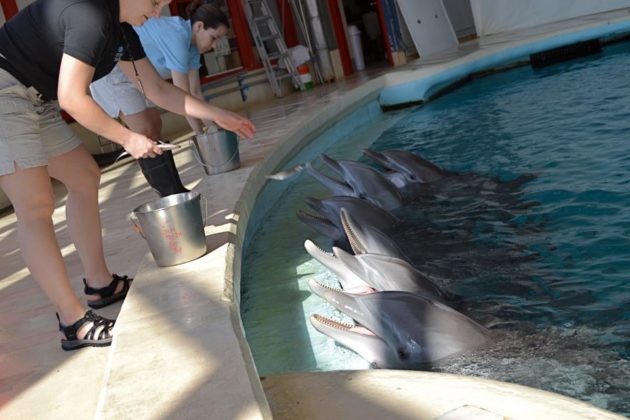 June 14, 2016 — Today’s announcement that the National Aquarium plans on constructing a “sanctuary” for its eight dolphins in the tropics is indeed a game changer.  Although it gives verbal ammunition to animal rights activists in their fight against other facilities holding marine mammals, it is also an example of a creative way of improving animal welfare in exhibit design and expanding animal care facilities beyond the brick and mortar of traditional zoos and aquariums.

It is important to realize that, much like the Ringling Bros Center for Elephant Conservation in Florida, what is being called a “sanctuary” is not a “sanctuary” in the animal rights sense of the term.  Animal sanctuaries typically service two kinds of animals – those that have been abused or neglected and might be in need of rehabilitation, and those that lived in zoos or performed publicly and who are past their prime.  Neither is the case with the National Aquarium’s dolphins.

Although many retired animals are sent to sanctuaries, this should not be considered a retirement.  Since 2011, no scheduled choreographed performances have taken place with the Aquarium’s eight dolphins, though behavior and training demonstrations do continue daily and will continue at the seaside habitat.  Likewise, sanctuary bans on breeding should not be taken into consideration as the Aquarium took steps to end dolphin breeding years ago to prevent inbreeding, since the two male dolphins are related to the females in its collection.

Two years ago, I was contacted by National Aquarium’s CEO John Racanelli, who discussed at length the options the Aquarium was considering for its dolphins, one of which was the seaside habitat solution.  It’s best to think of the Aquarium’s new tropical dolphin habitat as an exhibit – an expansion of the Aquarium’s Baltimore campus, if you will. It will be accessible to guests at the Aquarium through cutting edge technical innovations – which I’m sworn to secrecy about for the moment, but will gladly discuss once the Aquarium makes them publicly known.

By its timeline, National Aquarium’s consideration of a seaside habitat predates both Ringling’s decision to retire its elephants and SeaWorld to end breeding of its killer whales.  This situation, though is very different.  Ringling will continue to breed its elephants in a controlled environment, while SeaWorld has continually downplayed placing its whales in what activists call “sea pen sanctuaries,” and the courts have been on the company’s side. Efforts led by the animal rights group PETA in federal court to release captive killer whales owned by SeaWorld and Parques Reunidos to such sanctuaries have so far failed five out of six times, with the sixth case having been filed within the past month.

National Aquarium’s decision to build the seaside habitat is based as much on increasing attendance and revenue as it is improving the dynamics of the dolphins’ surroundings.  When the Aquarium switched from scheduled showtimes on an upcharge ticket to general visitation, more people were able to flow through the facility, with a slight increase in general admission ticket prices offsetting the loss from the discontinuation of show tickets.  Now, with the dolphins relocating by 2020 off premises, valuable real estate will become available.  Whether the tank will be used for rescue and rehabilitation of local marine life or the entire area will be remodeled into a new exhibit remains to be seen.

In many ways, the new seaside habitat harkens back to 1972, when the Zoological Society of San Diego opened the San Diego Wild Animal Park (now known as the San Diego Zoo Safari Park), with the concept of allowing its animals to roam in large, naturalistic enclosures rather than reside in the compact cages and exhibits then found within the Zoo grounds at Balboa Park.

As with the San Diego Zoo forty-four years ago, the National Aquarium isn’t removing its dolphins – it’s expanding its facility, its scope, and with it, the guest experience.

Joe Kleimanhttp://wwww.themedreality.com
Raised in San Diego on theme parks, zoos, and IMAX films, InPark's Senior Correspondent Joe Kleiman would expand his childhood loves into two decades as a projectionist and theater director within the giant screen industry. In addition to his work in commercial and museum operations, Joe has volunteered his time to animal husbandry at leading facilities in California and Texas and has played a leading management role for a number of performing arts companies. Joe previously served as News Editor and has remained a contributing author to InPark Magazine since 2011. HIs writing has also appeared in Sound & Communications, LF Examiner, Jim Hill Media, The Planetarian, Behind the Thrills, and MiceChat His blog, ThemedReality.com takes an unconventional look at the attractions industry. Follow on twitter @ThemesRenewed Joe lives in Sacramento, California with his wife, dog, and a ghost.
Share
Facebook
Twitter
Linkedin
Email
Print
WhatsApp
Pinterest
ReddIt
Tumblr
Previous articleShanghai Disneyland Grand Opening Celebration Starts Today – Will Conclude with Two Hour Live Television Broadcast
Next articleCutting Edge Film SPACE NEXT Will Showcase Past, Present, and Future of Space Exploration to NewSpace Conference Delegates at Museum of Flight