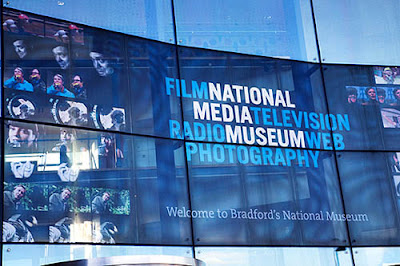 London and Bradford, UK — The National Media Museum in Bradford has unveiled the earliest colour moving pictures ever made. The Museum will now invite the public to see these vivid images from its Collection for the first time in over a hundred years in a new display, now open.

These films were made by photographer and inventor Edward Turner using a process he patented with his financial backer Frederick Lee in 1899. Experts at the Museum have dated the films to 1901/2, making these the earliest examples of colour moving pictures in existence.

Lee and Turner’s invention has always been regarded by film historians as a practical failure but it has now been ‘unlocked’ through digital technology, revealing the images produced by the process for the first time in over a hundred years. It’s also a story of young death and commercial intrigue in the earliest days of the film industry.

Turner developed his complex three-colour process with support, first from Lee and then from the American film entrepreneur, Charles Urban. Using a camera and projector made by Brighton-based engineer Alfred Darling, Turner developed the process sufficiently to take various test films of colourful subjects such as a macaw, a goldfish in a bowl against a brightly striped background and his children playing with sunflowers, before his death in 1903 aged just 29. Urban went on to develop the process further with the pioneer film-maker George Albert Smith which resulted in the commercially successful Kinemacolor system, patented in 1906 and first exhibited to the public in 1909. Sadly, Turner’s widow never received a penny from her husband’s invention.

On discovering the film, Michael Harvey, Curator of Cinematography at the National Media Museum worked with film archive experts Brian Pritchard and David Cleveland to reconstruct the moving footage in colour following the precise method laid out in Lee and Turner’s 1899 patent. They turned to experts at the BFI National Archive who were able to undertake the delicate work of transforming the film material into digital files, and so the team were able to watch these vivid colour moving pictures for the first time, over one hundred years since they had been made.

Michael Harvey said: “We sat in the editing suite entranced as full-colour shots made 110 years ago came to life on the screen. The image of the goldfish was stunning: its colours were so lifelike and subtle. Then there was a macaw with brilliantly coloured plumage, a brief glimpse of soldiers marching and, most interestingly, young children dressed in Edwardian finery. I realised we had a significant find on our hands. We had proved that the Lee and Turner process worked but it remained to identify who those children were and establish as precisely as possible when these first colour images were made.”

Through analysis of documentary evidence including the fact that the camera was completed in 1901 and that Turner died in March 1903, as well as genealogical research into the Turner family, the National Media Museum was able to confidently date most of the films to 1901/2 making them the earliest colour moving pictures made.

The public can see the Lee and Turner footage for the first time in more than one hundred years as it premieres today, 13 September, as part of a free display, at the National Media Museum in Bradford. Bradford was designated the world’s first UNESCO City of Film in 2009. The display also features the story of the Lee and Turner footage and shows the unique and complicated projector used for the system along with related items from the Charles Urban Archive which is part of the National Cinematography Collection.

Paul Goodman, Head of Collections at the National Media Museum said: “This wonderful rediscovery highlights the untapped potential of the National Media Museum’s Collection, and the Lee & Turner films can now take their rightful place alongside other unique artefacts and world–firsts which the Museum holds. Moreover, it highlights the Museum’s leading role in validating and challenging received wisdom about the subject matter it represents: film history can now be rewritten as a result of this marvellous find.”

The project was supported with funding from Yorkshire Film Archive and Screen Yorkshire – project partners for the restoration of the Lee and Turner collection.

A BBC documentary about the discovery of the Lee and Turner footage will screen on 17 September in the South East and Yorkshire.

With exclusive access to the National Media Museum, BBC South East tells story of this remarkable discovery in ‘The Race For Colour’. Presented by broadcaster, journalist and film critic Antonia Quirke, the documentary follows the astonishing discovery of the earliest colour moving pictures ever; and looks back at the wonder of movies in the Edwardian age and the history of the colour film industry. ‘The Race For Colour’ is on BBC One (South East and Yorkshire) and can also be viewed via the BBC iPlayer.

Joe Kleimanhttp://wwww.themedreality.com
Raised in San Diego on theme parks, zoos, and IMAX films, InPark's Senior Correspondent Joe Kleiman would expand his childhood loves into two decades as a projectionist and theater director within the giant screen industry. In addition to his work in commercial and museum operations, Joe has volunteered his time to animal husbandry at leading facilities in California and Texas and has played a leading management role for a number of performing arts companies. Joe previously served as News Editor and has remained a contributing author to InPark Magazine since 2011. HIs writing has also appeared in Sound & Communications, LF Examiner, Jim Hill Media, The Planetarian, Behind the Thrills, and MiceChat His blog, ThemedReality.com takes an unconventional look at the attractions industry. Follow on twitter @ThemesRenewed Joe lives in Sacramento, California with his wife, dog, and a ghost.
Share
Facebook
Twitter
Linkedin
Email
Print
WhatsApp
Pinterest
ReddIt
Tumblr
Previous articleIAAPA Attractions Expo 2012 Offering More Than 85 Educational Opportunities
Next articleCreative Optimist: Producer George Wiktor of the GW Group (and SATE 2012 speaker) is interviewed by InPark Magazine