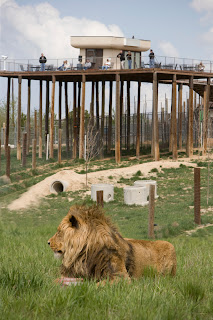 Keenesburg, CO, USA (May 29, 2012) /PRNewswire-USNewswire/ — Take a walk on the wild side as you stroll over 290 Lions, Tigers, Bears, Wolves and other Large Carnivores on one of the longest and most unique elevated pedestrian walkways in the world. The Wild Animal Sanctuary (TWAS), located 30 miles northeast of Denver, recently completed construction on its monumental “Mile Into The Wild” Walkway.

The walkway stretches more than 4,800 feet in length and traverses over 21 of the non-profit facility’s large acreage habitats. While the new structure provides unparalleled access to hundreds of rescued animals, the magnitude of the construction was nothing less than extraordinary as well.

The amount of materials and labor required by the project were astronomical. The educational expansion was built with more than 100 sections of bridging in multiple phases. Close to one million pounds of steel, and nearly a half million pounds of concrete were needed to complete the walkway that ranges in height from 18 to 42 feet. The strength of the walkway is nearly indestructible as it is capable of holding over 2 million tons; comparatively, the weight of more than 1,000 Elephants could easily walk on it at one time. The walkway is also so long that it can comfortably fit 4,000 people on it with everyone having lots of personal space. More than 3,000 gallons of paint were used which is enough to paint 200 average sized homes.

Along with 2,000 pounds of welds and over a quarter million pounds of lumber, the completion of the expansion is a spectacular feat in itself. The Executive Director of the Sanctuary, Pat Craig, designed, engineered and built the entire walkway with a very small team of people. The small team defied all odds as it only took less than a year to complete the entire project. When asked about the significance of the walkway, Craig said, “we have worked tirelessly on this project for several months, as it is one of the biggest and most important projects the Sanctuary has ever completed. It not only increases our educational scope, it also gives visitors stunning views of Large Carnivores that cannot be experienced anywhere else in the United States. This record breaking walkway would not have been possible without the generosity of all of our wonderful supporters, so we are forever grateful for their help in completing this project.”

The non-profit organization implemented a “Mile Into The Wild” funding campaign several years ago to help off-set the enormous costs of the educational project. People can continue to help fund the project by purchasing customized bronze plaques that are mounted on the walkway to commemorate their support. More information on the campaign can be found by going to their web site atwww.wildanimalsanctuary.org.

About The Wild Animal Sanctuary:
Rocky Mountain Wildlife Conservation Center, Inc., DBA The Wild Animal Sanctuary is a 720 acre refuge for large carnivores that have been confiscated from illegal or abusive situations. The Sanctuary is located 30 miles northeast of Denver, Colorado near the town of Keenesburg. The non-profit organization currently cares for more than 290 Lions, Tigers, Bears, Wolves and other large carnivores and provides lifelong care for its rescued animals. The Sanctuary is the oldest and largest carnivore sanctuary in existence, having been in operation since 1980. The facility is distinctive among others in that it provides large acreage natural habitats for its rescued animals to live in and roam freely. The Sanctuary is open daily to the public for educational purposes and features a “Mile Into The Wild” Walkway that visitors utilize to see the animals in natural habitats.

Joe Kleimanhttp://www.themedreality.com
Raised in San Diego on theme parks, zoos, and IMAX films, Joe Kleiman would expand his childhood loves into two decades as a projectionist and theater director within the giant screen industry. In addition to his work in commercial and museum operations, Joe has volunteered his time to animal husbandry at leading facilities in California and Texas and has played a leading management role for a number of performing arts companies. Joe has been News Editor and contributing author to InPark Magazine since 2011. HIs writing has also appeared in Sound & Communications, LF Examiner, Jim Hill Media, and MiceChat. His blog, ThemedReality.com takes an unconventional look at the attractions industry. Follow on twitter @themedreality Joe lives in Sacramento, California with his fiancé, two dogs, and a ghost.
Share
Facebook
Twitter
Linkedin
Email
Print
WhatsApp
Pinterest
ReddIt
Tumblr
Previous articleVIDEO: Transformers the Ride 3D Opening Ceremony, Universal Studios Hollywood
Next articleNew Gallery Dedicated to Frank Lloyd Wright Opening at SC Johnson Headquarters

AZA appoints Dr. Brian Davis as new Chair of the board of directors