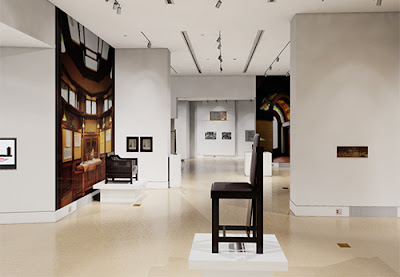 “SC Johnson’s history with Frank Lloyd Wright spans many decades, and his impact on our headquarters campus is enduring. But Wright’s influence goes beyond that, to the home,” said Fisk Johnson, Chairman and CEO of SC Johnson. “My family has a long appreciation for Wright’s vision, and we are thrilled to open this exhibit here in Racine – another unique attraction for people to experience when they visit.”

The Gallery is housed in SC Johnson’s Foster + Partners-designed Fortaleza Hall, also home to the Frank Lloyd Wright Research Library which features a collection of more than 800 items. The Gallery is co-curated by Bruce Brooks Pfeiffer, Archives Director at Taliesin West, Ariz., and Brady Roberts, Chief Curator of the Milwaukee Art Museum.

“We carefully selected items – including many never exhibited before – to bring Wright’s Prairie-Style designs to life,” said Pfeiffer, who worked with Wright before the architect died in 1959 and has been the driving force of the Frank Lloyd Wright Foundation Archives since then. “Not only was Wright influenced by natural landscapes to design homes that organically fit into its surroundings, but he also believed that each home’s furnishings were an integral part of its design, which is evident in the artifacts you’ll see inThe Gallery.”

During the early 20th century, Wright developed a philosophical foundation for his work based on how people connect with nature. This notion shaped his highly influential Prairie-Style homes from 1899-1909, which established his reputation as a world-famous architect. Simultaneously, Wright and several other architects from the Midwest came to be known collectively as “The Prairie School.” This group preferred an architecture style that stressed horizontality in houses – the line of the prairie – and evolved into a style in which rooms opened unto each other and extended the spatial enclosure into the site.

The Prairie-Style exhibit is the first in an annual series of exhibits at The Gallery, done in collaboration with the Frank Lloyd Wright Foundation. Rather than simply reflecting one period of Wright’s work, the collection will continue to explore Wright’s influence on the home throughout his career – from Wright’s earliest exploration of the natural house in the late 1800s through his American System-Built pre-cut housing venture of 1917 to his reinvention of the American home in 1940. The collection will also feature artifacts from the mid-1950s, when his work reached legendary scale.

The SC Johnson Gallery is the result of a July 2011 agreement between SC Johnson and the Frank Lloyd Wright Foundation for a long-term loan of a collection of Wright artifacts. The agreement was the newest chapter in a relationship that started more than 70 years ago.

In 1935, H.F. Johnson, Jr., third generation company leader, returned from his historic trip to Fortaleza, Brazil, invigorated and energetic. At that time, designs were in development for the company’s Administration Building. With his renewed outlook, Johnson sought out Frank Lloyd Wright for new designs with a more modern approach. Last year marked the 75th anniversary of the meeting between Johnson and Wright, which resulted in the commission of the SC Johnson Administration Building. Eight years later, Wright also designed the Research Tower. Thousands of tourists and architecture enthusiasts visit SC Johnson’s global headquarters each year to see Wright’s renowned designs.

To celebrate The Gallery opening, SC Johnson has expanded hours for visitors. Three tour programs which run from 1 hour to 3.5 hours are offered. Tours are on Fridays and Saturdays and are all free of charge. They include:

For more information on tours of the SC Johnson campus, please call (262) 260-2154, email [email protected], or use the online scheduling tool at www.scjohnson.com/visi

SC Johnson is a family-owned and managed business dedicated to innovative, high-quality products, excellence in the workplace and a long-term commitment to the environment and the communities in which it operates. Based in the USA, the company is one of the world’s leading manufacturers of household cleaning products and products for home storage, air care, pest control and shoe care. It markets such well-known brands as GLADE®, KIWI®, OFF!®, PLEDGE®, RAID®, SCRUBBING BUBBLES®, SHOUT®, WINDEX® and ZIPLOC® in the U.S. and beyond, with brands marketed outside the U.S. including AUTAN®, TANA®, BAMA®, BAYGON®, BRISE®, KABIKILLER®, KLEAR®, MR. MUSCLE®, and RIDSECT®. The 126-year-old company, that generates $9 billion in sales, employs nearly 13,000 people globally and sells products in virtually every country around the world.www.scjohnson.com

Joe Kleimanhttp://wwww.themedreality.com
Raised in San Diego on theme parks, zoos, and IMAX films, Joe Kleiman would expand his childhood loves into two decades as a projectionist and theater director within the giant screen industry. In addition to his work in commercial and museum operations, Joe has volunteered his time to animal husbandry at leading facilities in California and Texas and has played a leading management role for a number of performing arts companies. Joe has been News Editor and contributing author to InPark Magazine since 2011. HIs writing has also appeared in Sound & Communications, LF Examiner, Jim Hill Media, and MiceChat. His blog, ThemedReality.com takes an unconventional look at the attractions industry. Follow on twitter @ThemesRenewed Joe lives in Sacramento, California with his fiancé, two dogs, and a ghost.
Share
Facebook
Twitter
Linkedin
Email
Print
WhatsApp
Pinterest
ReddIt
Tumblr
Previous articleNearly Mile Long Elevated Walkway Opens Above Nature’s Top Predators
Next articleRegistration, Hotel, and Theme Park Tour Info for SATE 2012