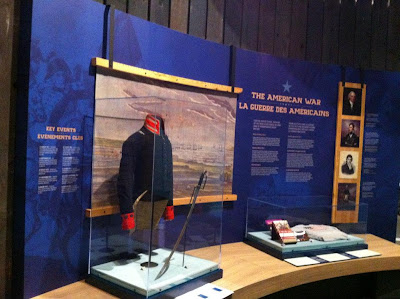 Ottawa, Ontario, Canada /CNW/ – The War of 1812 was a dramatic event in Canadian history. But what was at stake, and who won? A major exhibition at the Canadian War Museum reveals that the answer to this question depends on perspective. 1812, supported by National Presenting Sponsor TD Bank Group and National Supporting Sponsor Ancestry.ca, explores the war through the eyes of the four main participants: Canadians (including Canadian First Peoples), Americans, the British, and Native Americans.

For Canadians, the War of 1812 was a successful fight for survival against American invasions. For Americans, the war was a successful defence against the British Empire, one that forced Britain to respect American sovereignty and power. For the British, the conflict was a successful but almost irrelevant sideshow, scarcely remembered today, to the generation-long war against Revolutionary and Napoleonic France. For Native Americans, the war was a desperate fight for freedom and independence as they struggled to defend their homelands, and its conclusion was a catastrophic defeat.

“This remarkable exhibition offers a nuanced, thought-provoking portrait of an event that helped shape Canada as a nation,” said Mark O’Neill, President and CEO of the Canadian Museum of Civilization Corporation, which operates the Canadian War Museum. “Visitors will gain a richer and deeper understanding of the war by looking at its triumphs and struggles as experienced by the four participants.”

“The War of 1812 is a decisive event in our country’s history”, said the Honourable James Moore, Minister of Canadian Heritage and Official Languages. “This exhibition, one of the largest in the history of the Canadian War Museum, will share the stories of this critical moment in the founding of our country. We invite all Canadians to learn more about this important part of our past and to take part in many of the activities and events that will pay tribute to our heroes.”

The exhibition’s 130 artifacts come from the Canadian War Museum and other Canadian, American and British institutions, including Library and Archives Canada, the Smithsonian, The Metropolitan Museum of Art, the Library of Congress, the British Museum and the Royal Armouries. Visitors can explore perspectives on the war through remarkable artifacts, including the tunic worn by Sir Isaac Brock—”The Hero of Upper Canada”—when he was fatally shot during the battle of Queenston Heights; the Treaty of Ghent, which ended the war in 1815; a charred piece of the White House, which was set on fire when British troops captured Washington in 1814; and a British alliance medal presented to a Native American leader.

“I am thrilled that TD has joined with the Canadian War Museum to help ensure that Canadians learn about the many sides to this founding battle, which has played such a key role in shaping our nation,” said John See, Executive Vice President, Wealth Management, TD Bank Group. “I am also particularly pleased given my role as Royal Canadian Air Force Honorary Colonel for CFB Trenton.”

As a complement to 1812, the Canadian War Museum is proud to present Faces of 1812, an exhibition created by Library and Archives Canada that highlights the human side of the War of 1812. Displayed in the corridor adjacent to the main 1812 exhibition, Faces of 1812 features portraits from Library and Archives’ collection, supplemented by artifacts and other art works depicting military scenes and everyday life.

“Faces of 1812 is an excellent example of LAC’s commitment to making the country’s heritage and history accessible to all Canadians,” said Daniel J. Caron, Deputy Head and Librarian and Archivist of Canada. “This collaboration with the Canadian War Museum offers visitors an unexpected encounter with works of art from their national portrait collection. It will also be a great opportunity to deepen our understanding about our history.”

A companion publication for the exhibition, entitled Four Wars of 1812, written by distinguished Canadian War Museum Pre-Confederation historian Peter MacLeod and co-published with Douglas & McIntyre, was released on May 30, 2012. As with the exhibition 1812, the publication presents the same innovative approach to the conflict by exploring it from four perspectives. Four Wars of 1812 has also been translated into French, making it one of the few current publications on the War 1812 available in that language.

Virtual and travelling versions of War Museum’s 1812 exhibition will also bring the perspectives and history of the War to Canadians from coast to coast to coast.

The Canadian War Museum is Canada’s national museum of military history. Its mission is to promote public understanding of Canada’s military history in its personal, national, and international dimensions.

Joe Kleimanhttp://wwww.themedreality.com
Raised in San Diego on theme parks, zoos, and IMAX films, InPark's Senior Correspondent Joe Kleiman would expand his childhood loves into two decades as a projectionist and theater director within the giant screen industry. In addition to his work in commercial and museum operations, Joe has volunteered his time to animal husbandry at leading facilities in California and Texas and has played a leading management role for a number of performing arts companies. Joe previously served as News Editor and has remained a contributing author to InPark Magazine since 2011. HIs writing has also appeared in Sound & Communications, LF Examiner, Jim Hill Media, The Planetarian, Behind the Thrills, and MiceChat His blog, ThemedReality.com takes an unconventional look at the attractions industry. Follow on twitter @ThemesRenewed Joe lives in Sacramento, California with his wife, dog, and a ghost.
Share
Facebook
Twitter
Linkedin
Email
Print
WhatsApp
Pinterest
ReddIt
Tumblr
Previous articleIPM covers 2012 attraction openings
Next articleJane McGonigal to Keynote at SIGGRAPH 2012