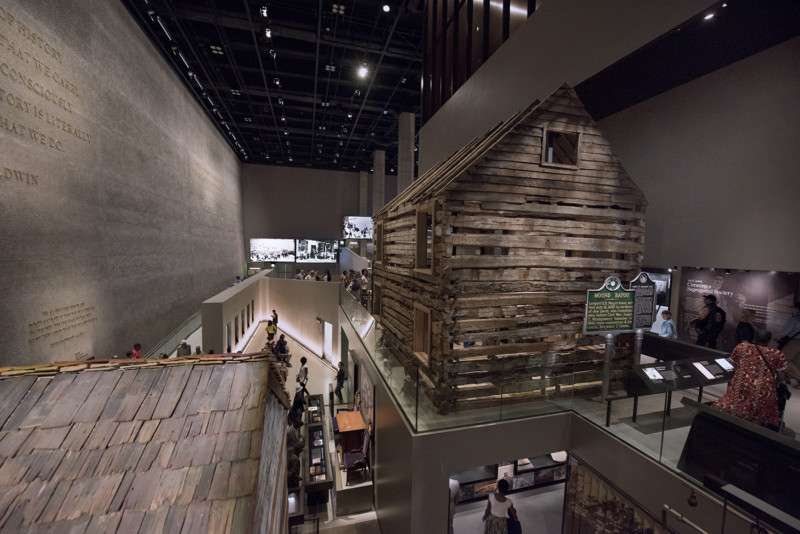 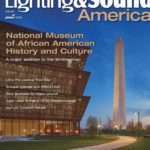 The $540-million Smithsonian National Museum of African-American History and Culture (NMAAHC) opened on September 24, 2016, on a five-acre site on the National Mall. Located on Constitution Avenue between 14th and 15th Streets Northwest, NMAAHC is among 11 museums and galleries of the Smithsonian Institution located on the mall.

The 400,000-sq.-ft. building has five levels above ground and four below. It features 100,000 sq. ft. of exhibit space, with roughly 3,000 artifacts on public display. NMAAHC has fielded huge crowds since opening using timed ticketing. In February 2017, reported attendance topped one million, with an average dwell time of six hours.

NMAAHC was 13 years in the making. In 2009, the museum’s architectural team of Freelon Adjaye Bond/ SmithGroup was selected; David Adjaye was lead designer, and Phil Freelon was architect of record. In 2011, Clarke/ Smoot/Russell was chosen as the construction firm. Landscape design was by the team of Gustafson Guthrie Nichol. Groundbreaking took place in February 2012. The building has many sustainable elements and is expected to receive LEED Gold certification. The three-tiered, bronze-colored corona form of the building and its decorative, light-permeable facade draw upon African and African-American motifs.

Design & Production provided fabrication, AV integration, and installation. Several key media elements for the exhibits (four films, 11 interactives, and 13 audioscapes) were developed by Cortina Productions; additional media/interactive elements were provided by Quatrefoil. Most media production was done under contract to the Smithsonian Channel, which gifted the media to the museum. Fisher Marantz Stone handled architectural lighting of the base building and temporary exhibit gallery.

The Oprah Winfrey Theater was a separate-scope project with a different team, the principal members of which were Fisher Dachs Associates (theatre consultant) and Shen Milsom & Wilke, LLC (acoustician).

Exhibits are organized chronologically and thematically. Visitors enter Heritage Hall at the ground level from either the National Mall or Constitution Avenue. An orientation theatre on this floor runs a show every 90 minutes.

Visitors descend to the main concourse leading to the three below-grade levels. Audio, produced by Cortina, plays during the elevator ride, taking one back in time and setting visitors up for the experience that begins at the lowest level. Emerging into a low-ceilinged, low-lit area, they begin their explorations. As visitors move forward in time, they also move upwards via a series of ramps back to the main concourse level.

The History Galleries play with scale. Some areas are low-ceilinged and symbolically confining; others open up and out, with high ceilings, wide sightlines, and natural light filtering in from the upper floors. Making the utmost of the combined height of the three concourse layers is a signature feature: the 50’ x 250’ Founding of America Wall, a complex display that tapped the full creative, technical, and collaborative powers of the team. It uses projections of large, still images combined with lighting, audio, and relief text to chronicle the sweep of history covered in the galleries.

Galleries focusing on community, comprised of four exhibitions: Making a Way Out of No Way, Sports: Leveling the Playing Field, Double V: The African American Military Experience, and The Power of Place. The museum’s top floor looks at culture in four galleries: Visual Arts, Musical Crossroads, and Taking the Stage, all surrounding the signature, central Cultural Expressions Gallery with its 17-projector surround.

The Luce Group lighting design team, led by CEO Traci Klainer and CCO Richard T. Chamblin III, interfaced with D&P systems integration specialist Matt Swerdzewski. “Creating continuity throughout the museum while also having points of interest and visual diversity was a challenge,” Klainer says. “Our team took a great deal of time and effort, looking at all aspects of the design, including different fixture choices, color temperature. I believe this is the first museum of this size that is all LED [for the exhibits], as well as the first application of fiber-fed LED on this scale. It was important to the Smithsonian and the exhibit team to be energy efficient and have low-maintenance lighting solutions while always enhancing the collection.”

The 50’ x 250’ surface of the Founding of America Wall features a collection of quotes displayed in relief text, increasing in size from the bottom up, topped by one from Langston Hughes. There are also embedded display cases with white text on glass and projection on its surface of Pyrock. “We decided to light the wall like a theatrical cyclorama, using tunable white LED striplights,” says Klainer.

The official count for the AV system is 88 projectors, 153 small media players, 41 large media servers, 95 computers (mostly PCs) running interactives or control systems of some sort, and 165 monitors ranging between 22” and 90” (some 1080p, some 4K).  All are controlled and monitored with a distributed Medialon show control system. There are some 14 projector blends, the largest being the 17-projector array in the Cultural Expressions Gallery.

The lighting system, an ETC Unison Paradigm with Mosaic show controller controls 33 universes of lighting (“We fought to have a single lighting control system,” says Klainer.) There are nearly 10,000 lighting fixtures and more than 750 fiber optic illuminators.

The Lunch Counter in the second History Gallery is emblematic of how interactive exhibits can function simultaneously on the individual and group scales, and as entertainment and education. Users sit on stools at 12 individual workstations set into a countertop, evoking the landmark, nonviolent civil rights protests that took place at lunch counters in the 1960s. 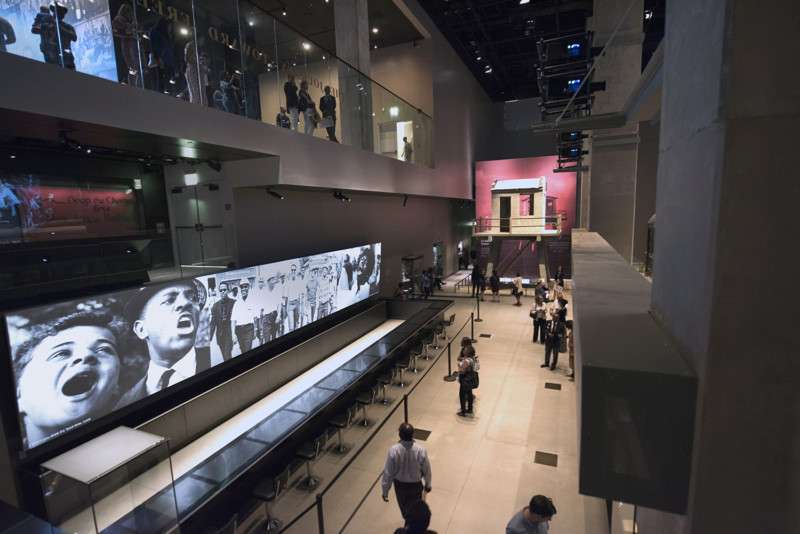 Explore More! features interactive exhibits sponsored by corporate donors. It is family- and school group-oriented and includes classroom space and a library. The American Alliance of Museums (AAM) honored NMAAHC in 2017 with a Gold MUSE Award in the interactive kiosk category, for Follow the Green Book, in the Target Learning Center on the Explore More! floor. The Green Book was an annual guide written for African-Americans to help them find businesses and accommodations where they would be welcome while on the road, in segregated, 1930s – 1960s America.

Cortina’s team collaborated closely with the Smithsonian IT department as well as D&P’s IT team on content management systems (CMS) for the interactive exhibits.

What it’s all about

“The best buildings tend to be those where the exhibits are developed alongside the architecture, and the spaces in the building take on the context of the exhibits,” says Steve Haas of SH Acoustics. “That happened here.”

“Our rich background in historical exhibits helped give us perspective for the challenge of NMAAHC—to ensure the technology functions as a platform for the curators to populate and immerse the guests in content,” says Yiannis Cabolis of Electrosonic.

“I used everything I learned throughout my career— lighting museums, theatre, themed entertainment,” Klainer says. “It was life-changing for me and I believe it is lifechanging for the visitors.”

“To make something this monumental happen—to create a world-class museum—called for a world-class team of experts in their respective fields,” says Bryan Sieling. “It all came together beautifully to create a seamless, moving, and memorable experience for our visitors. At the end of the day, that is what it’s all about.” • • •

Joe Kleimanhttp://wwww.themedreality.com
Raised in San Diego on theme parks, zoos, and IMAX films, InPark's Senior Correspondent Joe Kleiman would expand his childhood loves into two decades as a projectionist and theater director within the giant screen industry. In addition to his work in commercial and museum operations, Joe has volunteered his time to animal husbandry at leading facilities in California and Texas and has played a leading management role for a number of performing arts companies. Joe previously served as News Editor and has remained a contributing author to InPark Magazine since 2011. HIs writing has also appeared in Sound & Communications, LF Examiner, Jim Hill Media, The Planetarian, Behind the Thrills, and MiceChat His blog, ThemedReality.com takes an unconventional look at the attractions industry. Follow on twitter @ThemesRenewed Joe lives in Sacramento, California with his wife, dog, and a ghost.
Share
Facebook
Twitter
Linkedin
Email
Print
WhatsApp
Pinterest
ReddIt
Tumblr
Previous articleVirtual Reality, Animatronics Stand Out at 2017 IAAPA Attractions Expo
Next article3D Live: From concert space to outer space