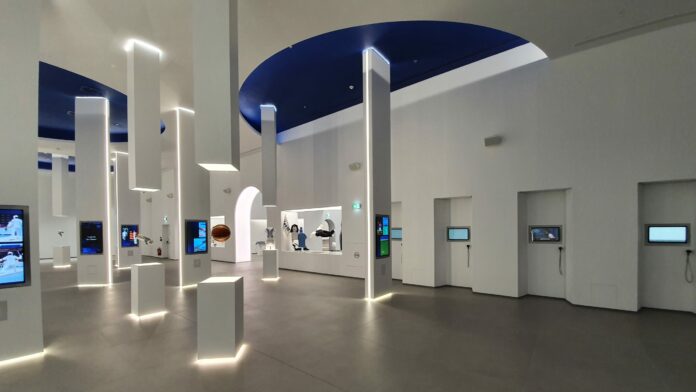 Renowned as one of the world’s oldest cities, Athens has opened an Olympic museum, directly connected with the nearby Olympic Stadium of Athens. The museum will celebrate the city’s long history with the Olympic Games, sending its attendees through the ages until the present day, with rare, rich exhibits showcasing interactive audio and visual enhancements.

Realized by real estate company LAMDA Development S.A., the museum’s goal is to house the entire Olympic heritage of Greece while highlighting Athens as the Olympic capital.

Started in August 2020 and finished in December the same year, the immense project required 13 projectors installed and calibrated throughout the various exhibits. Acoustics and AV designer, Technology & Acoustics, based in Greece, designed the complex AV system. LAMDA Development S.A. supplied the digital media content, and Athens-based system integrator Omikron Electronics handling the engineering, supply and integration of the systems.

At the beginning of a visitor’s journey into the Athens Olympic Museum is a cylindrical room depicting the timeline of the modern Olympic Games until the present day. The exhibit, named “Prologue,” recounts significant Olympic moments throughout history, through a symbolic 3D projection of an olive branch. The olive branch surrounds the entire room, and each leaf harbours a significant Olympic moments canvas, such as the first-time women participated in the games and the first winter Olympics.

Vangelis Petridis, Omikron Electronics’ Chief Technology Officer, said, “The VIOSO camera calibration software and hardware was the easy answer for us as the software is unique in being able to utilize camera auto-calibration for such a challenging application. The Prologue room required projection mapping on uneven surfaces, and the VIOSO Anystation Integrate, using the VIOSO Core in combination with the VIOSO Integrate software, provides the full turnkey solution and handles this with ease.”

The other exhibits where high quality projection calibration and edge blending was required such as the Victories and Defeats, Athens 2004 and Olympic Stadium exhibits, feature a blend of VIOSO’s solutions.

The Victories and Defeats exhibit is harboured inside a circular room within the EPOS gallery, which exhibits the Olympic torches through the years and Olympian awards, medals, and memorabilia. The exhibit features video footage of the Olympic successes and failures by its athletes, projected on a 10.3-meter (34-foot) panadome comprised of two Epson EB-L1495U projectors that required extreme geometry adaptation. One VIOSO Anystation Nano is responsible for the projection mapping, edge blending and synchronised playback of the video and the Tannoy surround sound audio system.

“We wanted to envelop visitors in the thrill of victory and the agony of defeat with this exhibit,” said Petridis.

“The unobtrusive video mappings of the exhibit created with the technology of Epson and VIOSO, as well as the surround sound, blend in a subtle way with the surroundings, to immerse visitors in a different time and place, where the values of Olympism were setting the values for the rest of the known world,” said Petridis.