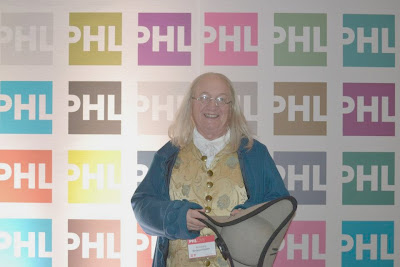 Philadelphia, PA, USA /BUSINESS WIRE/ — In a major effort aimed at strengthening Philadelphia’s positioning for global business attraction, the Philadelphia Convention & Visitors Bureau (PHLCVB), the official tourism promotion agency for the City of Philadelphia, has undertaken a marketing initiative designed to promote a consistent message about Philadelphia as a modern renaissance city, with open-source assets built around six stories that define the destination.

Earlier this year, the PHLCVB engaged more than 200 diverse individuals over the course of six months in a series of focus groups, work sessions and one-on-one interviews to determine the City’s global message. Participants included Philadelphia residents, visitors and students, both domestically and internationally. What emerged was six stories of Philadelphia as a modern renaissance city that celebrates freedom and democracy; values innovation and education; nurtures the creative spirit; appreciates outdoor life and sport and possesses a vibrant street life; all in an accessible and friendly way.

Utilizing these six narratives, the PHLCVB has developed a unique destination marketing venture – completely open-source assets for use by corporate, government and non-profit partners, to be used in any promotional efforts to sell Philadelphia to international visitors, convention planners, business prospects, business recruits, group travel tours or prospective college students. The elements of the six narratives, including supporting imagery, facts and a graphic identifier for Philadelphia based on the shortcode ‘PHL’ are all accessible via www.PHLpartners.com. Research conducted by the PHLCVB showed that international audiences were very receptive to the use of the shortcode PHL – which is the destination code for the Philadelphia International Airport and Philadelphia’s 30th Street Amtrak train station – as a symbol that conveys the modern sophistication of the City.

As an economic engine for Philadelphia, the PHLCVB creates jobs and fuels the economy by bringing meetings, conventions and travelers to Philadelphia. Through this collaborative initiative, the organization seeks to improve the global perception of Philadelphia by harnessing the collective voices of the City’s organizations for increased economic development.

“Our goal is to enlist all organizations with a vested interest in attracting business to our City and capturing our share of international visitor spending, to help tell these stories about Philadelphia and what we have to offer the world,” said PHLCVB President and CEO Jack Ferguson. “International tourism to the U.S. is forecasted to grow 23 percent by 2016 according to the U.S. Department of Commerce Office of Travel & Tourism Industries. This is a critical time to increase investment in Philadelphia’s global sales and marketing initiatives and to do it in a coordinated and strategic fashion.”

“We can all be ambassadors for Philadelphia, and each one of us can promote our City and tell our story,” said Mayor Michael A. Nutter. “So imagine the momentum we can create if we communicate a consistent image of Philadelphia to the world, not just to attract meetings and tourism, but to enhance business attraction, student recruitment, talent acquisition or even to bolster local pride.”

The impetus for the initiative was a 2011 Anholt City Brand Index (CBI) study – funded by the PHLCVB in partnership with the Economy League of Greater Philadelphia, Select Greater Philadelphia, Philadelphia International Airport and the Pennsylvania Convention Center – which measures the images and reputation of the world’s cities. The study looked at attributes of the destination including its international status, attractiveness and accessibility, quality of public amenities and accommodations, vibrancy of neighborhoods, and potential for economic and educational opportunities. The results of the study underscored Philadelphia’s great potential domestically and internationally as a place to visit, study, work and do business. The project was also informed by World Class Greater Philadelphia – an initiative led by the Economy League to identify strategies for making Philadelphia a world-class region.

The innovative marketing enterprise has already seen the support of several regional organizations, including the Philadelphia Industrial Development Corporation (PIDC) and theCity of Philadelphia’s Commerce Department, who employed the shortcode PHL in the moniker of a new venture StartupPHL which establishes Philadelphia as a city of choice for new startups and entrepreneurs. The Philadelphia Airport, has also utilized some of the open-source elements in recent discussions with international destinations on increasing airlift to the City. Campus Philly, an organization that encourages college students to study, explore, live and work in the Greater Philadelphia region is another partner working with thePHLCVB along with the Commonwealth of Pennsylvania and individual universities, to develop Edutour PHL, a series of “edutourism” programs (the combination of education and tourism) which draw from the new Philadelphia narrative and which will utilize the open-source assets.

Philadelphia Convention & Visitors Bureau (PHLCVB), www.discoverPHL.com, a private non-profit membership corporation, is the official Tourism Promotion Agency for the City of Philadelphia globally, and the primary sales and marketing agency for the expanded Pennsylvania Convention Center. The PCVB competes with its counterparts worldwide for convention and tourism business. The organization has departments dedicated to the multicultural, sports, and life sciences markets.

The PHLCVB incorporates the short code PHL, an open source graphic identifier for the City of Philadelphia into the Convention & Visitors Bureau brand identity. The graphic identifier and other assets for use by public, private and non-profit organizations can be found at www.PHLpartners.com. To request a login, email [email protected].

Joe Kleimanhttp://wwww.themedreality.com
Raised in San Diego on theme parks, zoos, and IMAX films, InPark's Senior Correspondent Joe Kleiman would expand his childhood loves into two decades as a projectionist and theater director within the giant screen industry. In addition to his work in commercial and museum operations, Joe has volunteered his time to animal husbandry at leading facilities in California and Texas and has played a leading management role for a number of performing arts companies. Joe previously served as News Editor and has remained a contributing author to InPark Magazine since 2011. HIs writing has also appeared in Sound & Communications, LF Examiner, Jim Hill Media, The Planetarian, Behind the Thrills, and MiceChat His blog, ThemedReality.com takes an unconventional look at the attractions industry. Follow on twitter @ThemesRenewed Joe lives in Sacramento, California with his wife, dog, and a ghost.
Share
Facebook
Twitter
Linkedin
Email
Print
WhatsApp
Pinterest
ReddIt
Tumblr
Previous article$1.3 Million Grant From OtterBox Brings Global Immersion Digital Dome to Fort Collins Museum of Discovery
Next articlePHOTO ESSAY: Mythbusters: The Explosive Exhibition (Part 2)