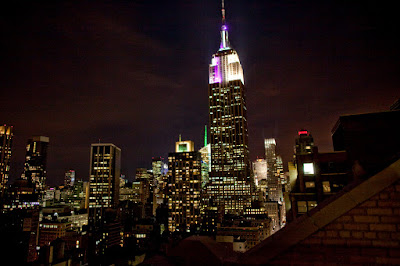 New York, NY, USA /BUSINESS WIRE/ — Globally recognized as an engineering marvel and symbol of New York City, the Empire State Building (ESB) has selected Philips, the world’s leader in lighting, as its partner to transition the building’s iconic tower lights to innovative LEDs. The two organizations have pushed the boundaries of LED technology to develop a state-of-the-art dynamic lighting system from Philips Color Kinetics that is unique to ESB and will allow the building’s façade and mast to change lighting scenes in real-time. In addition to greater control and management of the lighting, the new system will deliver the superior light levels for the design, as well as allow ESB to highlight its architectural details.

ESB celebrates many cultures and causes in the world community with iconic lightings. Its tower lights recognize key milestones, events, charitable organizations, countries and holidays, a tradition started in 1932, when a simple searchlight was used to announce the election of New York-born Franklin Delano Roosevelt as President. To honor the United States Bicentennial, ESB installed colored floodlights to illuminate the building at night, lighting up red, white and blue, leading to today’s very popular Lighting Partner program. The new Philips LED lighting system will help to enhance this program by making each lighting more unique and special.

ESB is replacing its traditional light fixtures with LEDs as part of its 21st century renovation. The new computerized system will allow customized light capabilities from a palette of over 16 million colors, including hard-to-achieve pastels, in virtually limitless combinations. The LED lights will replace the current palette of 10 colors, which also requires a team several hours to change the building’s nearly 400 fixtures. Soon ESB staff will be able to create and update customized lights, using new energy-efficient technology.

“Throughout our $550 million Empire State ReBuilding program, we’ve looked at every aspect of the building to make it energy efficient and install 21st century technology, befitting of its position as the World’s Most Famous Office Building,” said Anthony Malkin, president of Malkin Holdings. “It is time to update our iconic tower lighting. Initially, as we have both old-fashioned high intensity discharge and LED lighting side-by-side, there will be no obvious difference to the public’s view. But in September when the LED changeover is complete, we will see some differences. We surveyed the market for the most technologically advanced, energy efficient, and reliable lighting system to illuminate the international, iconic symbol of the New York City skyline. Philips Color Kinetics’ LED system will make our world famous tower lightings that much more magical.”

Moreover, using Philips Color Kinetics LED lighting technology will make it possible to control and focus the light exactly where and how the effect is desired. Ripple, cross-fade, particle and burst effects, previously not possible, can be easily automated to create unique lighting designs. The new Philips lighting system will also allow the building to minimize light spill, ensuring that light is focused on the façade and mast, while providing enough light to allow the building to be seen from anywhere in New York City. This feature not only respects the night sky, but the building’s neighbors as well.

“Lighting the Empire State Building has been a technical challenge and aspiration for us, and one that we have been working on with the ESB for years,” said Jeff Cassis, general manager of Philips Color Kinetics. “We have been developing our LED technology to create a solution that could achieve the right light levels and design for the building’s façade, while keeping true to the building’s identity as an iconic symbol of New York and building innovation. The result is a unique LED lighting system that creates as much light as the traditional light sources that it is designed to replace, yet one that can be adapted on the fly to redefine the New York City skyline.”


About Royal Philips Electronics
Royal Philips Electronics of the Netherlands (NYSE: PHG, AEX: PHI) is a diversified health and well-being company, focused on improving people’s lives through meaningful innovation. As a world leader in healthcare, lifestyle and lighting, Philips integrates technologies and design into people-centric solutions, based on fundamental customer insights and the brand promise of “sense and simplicity”. Headquartered in the Netherlands, Philips employs approximately 122,000 employees with sales and services in more than 100 countries worldwide. With sales of EUR 22.6 billion in 2011, the company is a market leader in cardiac care, acute care and home healthcare, energy efficient lighting solutions and new lighting applications, as well as lifestyle products for personal well-being and pleasure with strong leadership positions in male shaving and grooming, portable entertainment and oral healthcare.

Joe Kleimanhttp://wwww.themedreality.com
Raised in San Diego on theme parks, zoos, and IMAX films, InPark's Senior Correspondent Joe Kleiman would expand his childhood loves into two decades as a projectionist and theater director within the giant screen industry. In addition to his work in commercial and museum operations, Joe has volunteered his time to animal husbandry at leading facilities in California and Texas and has played a leading management role for a number of performing arts companies. Joe previously served as News Editor and has remained a contributing author to InPark Magazine since 2011. HIs writing has also appeared in Sound & Communications, LF Examiner, Jim Hill Media, The Planetarian, Behind the Thrills, and MiceChat His blog, ThemedReality.com takes an unconventional look at the attractions industry. Follow on twitter @ThemesRenewed Joe lives in Sacramento, California with his wife, dog, and a ghost.
Share
Facebook
Twitter
Linkedin
Email
Print
WhatsApp
Pinterest
ReddIt
Tumblr
Previous articleEmerging Technologies Highlight of SIGGRAPH 2012
Next articleDynamic Attractions wins $3.8 Million Theme Park Project in UAE