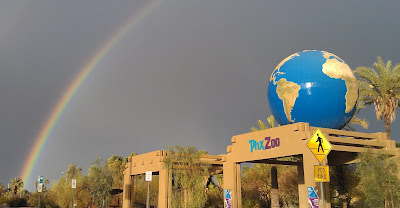 Phoenix, AZ, USA /PRWEB/ — President Obama announced his intent to nominate Bert Castro, President and CEO of the Arizona Zoological Society/Phoenix Zoo as a Member of the National Museum and Library Services Board.

“I am honored to be a part of this prestigious and knowledgeable group of individuals,” says Castro, President and CEO of the Arizona Zoological Society/Phoenix Zoo. “I look forward to serving on this Board and discussing relevant issues facing our country’s cultural institutions.”

Castro has lead the Arizona Zoological Society/Phoenix Zoo since 2008. Before his time in Phoenix, he was the Executive Director and CEO of the Oklahoma City Zoological Park and Botanical Garden since 2001. With a varied and unique work history, Castro has served in almost every capacity related to animal care during his zoological career. Castro began his career as the Children’s Zoo keeper at the Tulsa Zoo in 1985, spent time as the Assistant Curator at the Audubon Zoo in New Orleans from 1993 and 1995, then became the Curator of Birds and Mammals at Zoo Atlanta from 1995 to 1997 and Living Collections Manager/General Curator at the San Antonio Zoo from 1997 to 2001. Castro has also served on several boards including the Zoo Conservation Outreach, the Association of Zoos and Aquariums and the Board of St. Gregory’s University. Castro holds an Associate’s Degree in Natural Science from St. Gregory’s University, a B.S. in Zoology from Oklahoma State University and an M.S. from Friends University.

About the Phoenix Zoo
The Phoenix Zoo is a non-profit zoological park that serves 1.4 million guests annually. Home to more than 1,100 animals and many endangered and threatened species, the Zoo provides experiences that inspire people and motivate them to care for the natural world. For information on upcoming events, exhibits and activities at the Phoenix Zoo, visit http://www.phoenixzoo.org. The Zoo is a proud member of the Association of Zoos and Aquariums, a non-profit organization dedicated to the advancement of zoos and aquariums in the areas of conservation, education, science, and recreation. Look for the AZA logo whenever you visit a zoo or aquarium as your assurance that you are supporting a facility dedicated to providing excellent care for animals, a great experience for you, and a better future for all living things. The AZA is a leader in global wildlife conservation, and your link to helping animals in their native habitats. To learn more, visit http://www.aza.org.

Joe Kleimanhttp://wwww.themedreality.com
Raised in San Diego on theme parks, zoos, and IMAX films, Joe Kleiman would expand his childhood loves into two decades as a projectionist and theater director within the giant screen industry. In addition to his work in commercial and museum operations, Joe has volunteered his time to animal husbandry at leading facilities in California and Texas and has played a leading management role for a number of performing arts companies. Joe has been News Editor and contributing author to InPark Magazine since 2011. HIs writing has also appeared in Sound & Communications, LF Examiner, Jim Hill Media, and MiceChat. His blog, ThemedReality.com takes an unconventional look at the attractions industry. Follow on twitter @ThemesRenewed Joe lives in Sacramento, California with his fiancé, two dogs, and a ghost.
Share
Facebook
Twitter
Linkedin
Email
Print
WhatsApp
Pinterest
ReddIt
Tumblr
Previous articleKennywood Wins Awards from About.com and NAPHA
Next articleVIDEO: Universal’s 2012 Attractions