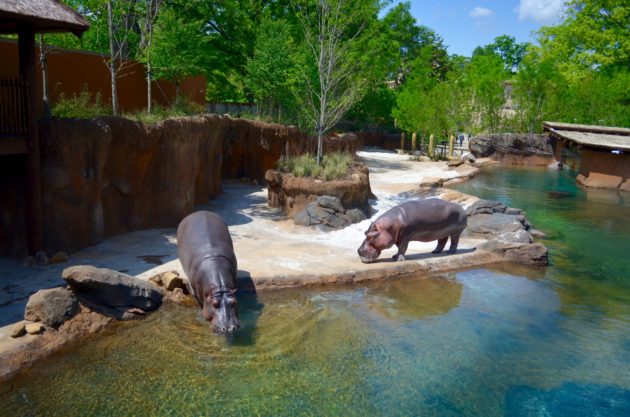 Memphis, TN, USA — On April 29, the Memphis Zoo opened its $22 million Zambezi River Hippo Camp Exhibit. The 4-acre exhibit is a tribute to the animals, culture and architecture of the Zambezi River Valley in Africa featuring hippos and Nile crocodiles with spectacular viewing areas that bring you up-close and personal with the animals. There are three hippos, including one new male hippo from Disney’s Animal Kingdom (“Uzazi”) and two females from the Memphis Zoo (“Binti” and “Splish”). Joining them in Zambezi are four Nile crocodiles – three females and one male – that arrived from South Africa via FedEx. Ranging in size from 12 to 14 feet, these crocodiles are among the largest of their kind in North America. Both exhibits include underwater viewing areas. The hippo area contains 200,000 gallons of water, all of which can be purified in an hour thanks to a state-of-the- art, custom-built filtration system.  The Zambezi exhibit is also home to other rare animals such as okapi, nyala antelope and patas monkeys, as well as yellow-backed duikers, lesser flamingos and cape vultures. Other African birds are featured in a free-flight aviary.

Joe Kleimanhttp://wwww.themedreality.com
Raised in San Diego on theme parks, zoos, and IMAX films, Joe Kleiman would expand his childhood loves into two decades as a projectionist and theater director within the giant screen industry. In addition to his work in commercial and museum operations, Joe has volunteered his time to animal husbandry at leading facilities in California and Texas and has played a leading management role for a number of performing arts companies. Joe has been News Editor and contributing author to InPark Magazine since 2011. HIs writing has also appeared in Sound & Communications, LF Examiner, Jim Hill Media, and MiceChat. His blog, ThemedReality.com takes an unconventional look at the attractions industry. Follow on twitter @ThemesRenewed Joe lives in Sacramento, California with his fiancé, two dogs, and a ghost.
Share
Facebook
Twitter
Linkedin
Email
Print
WhatsApp
Pinterest
ReddIt
Tumblr
Previous articleNew AAM strategic plan emphasizes museums’ role in education
Next articleMemphis Zoo Opens $22 Million Zambezi River Hippo Camp