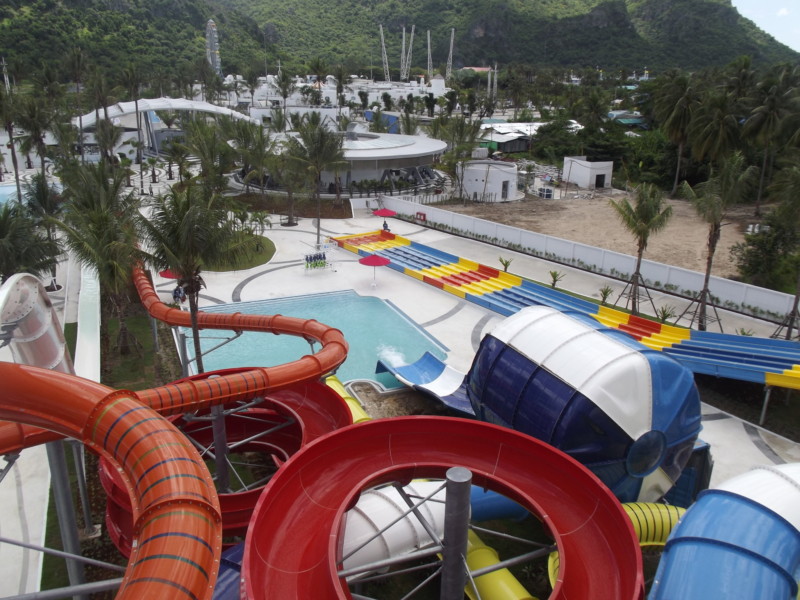 [quote]We’ve already seen the excitement the new park offers to guests and have no doubt it will impact the entire region in a very positive manner.” –Supoj Tantichirasakul, chairman of Pena House Public Co. Ltd. [/quote]

Istanbul, Turkey — Santorini Water Fantasy, the new waterpark add-on to the existing Santorini theme park, has officially opened last fall. The opening event-attended by actress “Mew” Lalita (Panyophat) Sasiprapa and Thai rock bands Modern Dog and Jetset’er, who also performed at the media event, as well as members of the development team and local politicians – was held in September 2013.The US$3.25 million (100 million THB) waterpark is adjacent to the Cha-Am Premium Outlet Mall in the southern part of the Phetchaburi Province in central Thailand close to Bangkok.-the park has attracted thousands of guests eager to enjoy its US$3.25 million (100 million THB) aquatic attractions.

The new waterpark, as well as the existing amusement park and retail center, is located in the southern part of the Phetchaburi Province in central Thailand. The facilities were conceived by Supoj Tantichirasakul, chairman of Pena House Public Co. Ltd. and its subsidiary. Those in the fashion world may recognize Tantichirasakul’s name due to his long experience as a fashion-apparel maker. In the business world, however, he is known for his creative thinking in developing new concepts for tourism.

Sitting on about 4 acres (12 rai), the new waterpark has attracted increased numbers of guests to the area, which already drew up to 10,000 visitors a day before the waterpark opened. The majority of guests are from Bangkok, though approximately 10-20 percent are tourists.

Tantichirasakul says the new waterpark is expected to support his plan to transform Cha-Am’s main road into a new “Western Gold Coast,” similar to Australia’s Gold Coast. His company is expanding investments in Cha-Am, including other amusement parks and waterparks.

“Santorini Water Fantasy is a thrilling new addition to our plan for enriching the tourism in this area,” Tantichirasakul adds.

The aquatic options of Santorini Water Fantasy include a mix of rides. Designed by Polin Waterparks, the park features 12 water-play areas and can accommodate up to 3,500 guests.

The park’s main attraction is its King Cobra waterslide. Featuring bold red, black and white scales, the King Cobra’s impressive veneer extends along its massive 50-foot (15.24-meter) height and 260-foot (790-meter) length. The slide enables two riders to race along a circular path of twists, turns and surprises. Riders reach speeds of up to 32 mph (51 km/h) via water pressure of 3,875 gallons (14,668 liters) per minute through open and closed tubes. The ride ends just after they endure a heart-pounding plunge of nearly 25 feet (8 meters) down a 50-degree slope.

Other rides that Polin designed and installed at the new waterpark include:

The waterpark also features a giant wave pool, a wide variety of food and drink offerings, secured lockers, air-conditioned poolside cabanas and shopping. An especially unique offering is a specially designed camera system that allows guests to connect in advance with their Facebook accounts. Then, when photographs are taken of guests as they ride various attractions, the images are automatically uploaded to the guests’ Facebook pages.

Joe Kleimanhttp://wwww.themedreality.com
Raised in San Diego on theme parks, zoos, and IMAX films, InPark's Senior Correspondent Joe Kleiman would expand his childhood loves into two decades as a projectionist and theater director within the giant screen industry. In addition to his work in commercial and museum operations, Joe has volunteered his time to animal husbandry at leading facilities in California and Texas and has played a leading management role for a number of performing arts companies. Joe previously served as News Editor and has remained a contributing author to InPark Magazine since 2011. HIs writing has also appeared in Sound & Communications, LF Examiner, Jim Hill Media, The Planetarian, Behind the Thrills, and MiceChat His blog, ThemedReality.com takes an unconventional look at the attractions industry. Follow on twitter @ThemesRenewed Joe lives in Sacramento, California with his wife, dog, and a ghost.
Share
Facebook
Twitter
Linkedin
Email
Print
WhatsApp
Pinterest
ReddIt
Tumblr
Previous article
Behind the Scenes video on creating the Revolution Tru-Trackless dark ride vehicle system
Next article
Qube Cinema Showcasing KeySmith.biz Website at NAB