Polin: The Wave and the Spire 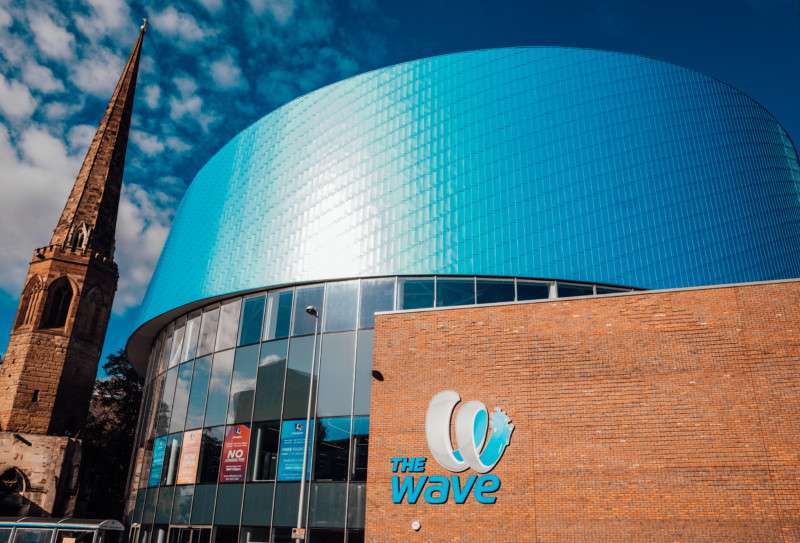 Beneath an historic spire in Coventry, Polin slides grace a unique vertical waterpark

ABOVE: Thinking “up” instead of “out” – Featuring numerous Polin slides, The Wave is considered a design gamechanger for waterparks and an agent of urban revitalization for Coventry. All images courtesy Polin.

In the city center of Coventry, 18 miles southeast of Birmingham, England, sits the cylindrical building known as The Wave. Part fitness center, part waterpark, featuring six cutting edge slides from Polin Waterparks, the £37 million building is the centerpiece of an urban renewal project that links the city’s past with its future.

The Wave and the Spire

It is in the shadow of the Christ Church spire, upon the remnants of the original 13th Century Greyfriars Monastic Church, that The Wave has been constructed.

Although small villages had existed in the area, the story of Coventry begins in 1043, when Leofric, the Earl of Mercia, and his wife, the Lady Godiva, founded the church around which the city of Coventry began to develop.

Almost two centuries later, in 1234 the Franciscan monks of Greyfriars Monastery began building a monastic church in Coventry, with a spire 230 feet (70m) tall. In 1538, the Greyfriar order was suppressed by Henry VIII and the walls of the church were torn down, leaving only the tower and its spire in place. The spire eventually blew down in 1551. The spire had been rebuilt by 1832, when Christ Church was built on the former Greyfriars property, attached to the original tower. The church was destroyed in the 1940s during World War II and the remnants demolished in 1950, with only the tower and spire remaining.

The Christ Church spire is one of three historic church spires that line the Coventry skyline – Holy Trinity and St Michael’s are the other two.

Coventry City Council, which owns the property, selected the name “The Wave” for the waterpark and fitness complex “because it’s short, memorable, descriptive and it has been taken from the design of the building. The logo features a spiral letter ‘W’ that brings a flavor of a twisting flume ending in a splash of water making it an innovative and modern design.”

The first phase of the complex, located on the lowest level and featuring a swimming pool, fitness center, squash courts, a dance studio, and a day spa, opened on July 22, 2019. The second phase of the project is the waterpark, taking up the top two floors of the building, and features six overlapping Polin waterslides, along with a lazy river and an 11m wide Breaker wave pool from Murphy’s Waves.

According to Roger Currie of Neuman Aqua, an international design/build company that specializes in diverse aquatic entertainment facilities: “The Coventry leisure park is such an exceptional structure. It’s beautiful, sophisticated and will have an incredibly positive impact on the city.”

Designed by FaulkerBrowns Architects, whose recreational projects include indoor snow and ski facilities, velodromes, and aquatic centers in North America, the UK, and Dubai, The Wave sits on a tight footprint only 50m in diameter. In a January 28, 2019 article in the Coventry Telegraph, Robert Summerson of FaulkerBrown explained how the architects had to think “up” instead of “out” when designing the structure. “These types of facilities are usually located on out-of-town locations to allow for extra room, so the limited space threw up a range of critical design-related decisions that could well redefine the creation of other waterparks moving forward.”

Placing the waterslides in such a tight area was an installation challenge. “The floorplan ultimately put the waterslides on the third floor, an especially unusual proposal,” stated Zeyenp Canbaz, Senior Architect of Polin Waterparks. “That meant Polin needed to specially adapt its rides to fit within the specific limitations of the building’s mostly round layout and its constricting ceiling height. It wasn’t an easy design. But it was incredibly fun to work on. It was challenging yet exciting to see the puzzle pieces of the slides match the required size needs and, finally, fit perfectly within the restrictions of the facility.” The six slides provided by Polin for the project are:

• A Sphere-Space Shuttle Combo called The Crestar. Polin fused two of its rides to create this streamlined attraction that puts two riders on a raft that enters a steep drop that sends them speeding into both a sphere and a pod. In both, gushing water propels riders from side to side before exiting out and expelling them downhill. Polin’s Natural Light Effects (NLE) technology enlivens the experience with color as light from outside the tubes interacts with water sluicing inside to create amazing light effects.

• A Space Hole called The Cyclone. Situated at the center of the new leisure facility, this ride propels riders through an enclosed tube that exits into a huge, open bowl. Centrifugal force whirls riders around the bowl’s interior before they exit via a breathtaking splash through the bowl’s center and drop into a plunge pool on the second floor. Polin’s NLE technology adds extra drama to the ride.

• A Looping Rocket called The Torrent. This attraction features a unique “launch capsule” with a trap door that opens to send riders through a high-speed, horizontal, 360-degree loop. Translucent components allow other guests in the facility to watch riders shoot through the slide’s tubes.

• A Navigator called The Rapids. Riders slide along an extensive 135m (443-feet) path on this water coaster ride. Whether riding alone or with a friend, travelers slip in and out of the light as they experience a unique light show due to the slide’s NLE technology.

• A Tunnel Body slide with Slide‘N Roll special effects called The Cascade. This specially engineered ride delivers a long, smooth journey. It combines several technologies exclusive to Polin to integrate unique sound, lighting and design special effects into one slide. The goal: an experience that fulfills the full range of sensory stimuli for guests.

• A Mini Tsunami called The Riptide. High capacity is the feature of this waterslide that is strategically designed for “end-to-end” excitement. The slide will feature a custom Coventry logo design on its exterior.

With the waterpark built on top of the fitness center, the weight of the slides was a major consideration. All of Polin’s slides at the project were manufactured using Light Resin Transfer Molding (L-RTM) technology, which not only creates slide components with a shiny, smooth finish on both the interior and exterior, and result in lighter weight slides than traditional manufacturing methods, reducing the load and making installation simpler.

The layout was also specially designed by Polin to work within the special restrictions of the project. The bowl of The Cyclone sits in the very middle of the building and exits riders into a plunge pool on the floor below. With the exception of the Cyclone, all of the slides incorporate dry-out exits on the second floor, with a spiral ramp returning guests back to the third level.
To incorporate The Rapids, the ride was designed with three uphill sections – one with and two without waterjets. Additionally, the building restrictions meant that the heights of all the slides had to be restricted. The Cyclone is 14.62 meters (48 feet) high, and the other five slides are 11.50 meters (37.72 feet) high.

Bilge Pakis, Design Manager of Polin Waterparks, sums up the project this way: “It is a game-changer in its distinctive design, required to fit the facility into a very tight footprint on a site where Franciscan monks originally constructed a cruciformshaped church in the early 1200s. Over the years, the site’s space became smaller and smaller as history left its marks.”

New centerpiece of the city center

The Wave is managed by CV Life, a public trust that operates several aquatic and fitness centers in the Coventry area that draw more than 1.25 million visits per year. That number will soon increase, with estimated annual attendance at The Wave between 1.1 and 1.3 million visitors. Other existing leisure options include Genting Casino Coventry, which opened in 2012, and the Coventry Transport Museum, which reflects the city’s status as a manufacturing center for British automobiles, and underwent a £7.5 million modernization in 2004.

From a statement by Coventry City Councilor Kevin Maton: “City centers are changing – they are no longer about shopping. They are about spaces where people live, work and have fun. This new facility will be an important part of the new mix for our city center as we strive to make Coventry a top ten city again.”

The Wave is intended as a catalyst to bring locals into the city center and attract tourists from the wider region as well. It is a key component of a multi-million pound undertaking, within the scope of a 2016 master plan for the city center, devised by architectural firm Jerde in conjunction with the City Council.

Also in the works: new residential housing, a retail and entertainment complex with shopping, cafes, cinemas, and a bowling alley; and large areas of public parkland and open gathering places. The latter includes a £2.5 million public space with water features, benches, and stylistic playground equipment that will be placed in front of The Wave. The revitalization of the center city positions the city for 2021, when Coventry will receive the designation UK City of Culture. • • •

Joe Kleimanhttp://wwww.themedreality.com
Raised in San Diego on theme parks, zoos, and IMAX films, InPark's Senior Correspondent Joe Kleiman would expand his childhood loves into two decades as a projectionist and theater director within the giant screen industry. In addition to his work in commercial and museum operations, Joe has volunteered his time to animal husbandry at leading facilities in California and Texas and has played a leading management role for a number of performing arts companies. Joe previously served as News Editor and has remained a contributing author to InPark Magazine since 2011. HIs writing has also appeared in Sound & Communications, LF Examiner, Jim Hill Media, The Planetarian, Behind the Thrills, and MiceChat His blog, ThemedReality.com takes an unconventional look at the attractions industry. Follow on twitter @ThemesRenewed Joe lives in Sacramento, California with his wife, dog, and a ghost.
Share
Facebook
Twitter
Linkedin
Email
Print
WhatsApp
Pinterest
ReddIt
Tumblr
Previous articleRegistration now open for Integrated Systems Europe (ISE) 2020, FREE registration for IPM readers
Next articleSeaWorld announces Aquatica San Diego waterpark will transform into second Sesame Place theme park