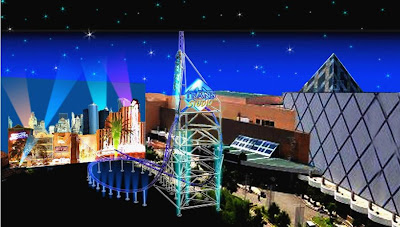 Indonesia — Trans Studio announced Premier Rides has been selected to build the signature attraction for the new Trans Studio Theme Park at Bundung Supermal in Indonesia. Premier was chosen after completing an exhaustive competitive search. This will be the first launch coaster in Indonesia using a magnetic system and the train will travel forward and backwards.

When the ride starts, the sleek train accelerates, reaching its maximum speed in just over two seconds. During the launch, riders will experience a maximum of one G when pushed back in their seats. After the train leaves the station it immediately shoots up, almost vertically into an inverted top hat element. The riders are inverted and race down the second half of the top hat element. For a second time the train reaches maximum before it executes a 180 degree turn to the right with riders shooting up a tower, looking straight up at the sky and experiencing an almost zero G condition. Just before the track ends, the train comes to a stop and is
accelerated backwards through the entire course of the ride. Only when the train comes to a stop in the station can the riders catch their breath.

Budiman Wijaya, Director of Trans Studio, commented on the quality of Premier’s products: “We were very impressed with the quality and reliability of Premier’s work when we recently visited “Revenge of the Mummy”™ at Universal Studios Singapore. We especially like the dedication shown by Premier’s personnel working and meeting all of the client’s goals.”

Wijaya adds, “Our mall project will be one of our nation’s most exciting destinations and we have chosen Premier’s coaster to assure we are offering the best available product to our guests.”

Jim Seay, president of Premier Rides noted “It is an incredible honor for Premier being selected for the Trans Studio project. Premier has invested a significant effort expanding into the Asian market which we see as both exciting and dynamic. Indonesia’s economy is strong and we are honored to be working with one of the leading and most respected companies in the region.”

ABOUT TRANS STUDIO
Trans Studio Indoor Theme Park at Bundung Supermal will be one of the largest indoor theme parks in Asia. The park is under construction and will open in 2011. Trans Studio Theme Park Bundung is a member of the Para Group. Led by Chairman Chairul Tanjung, Para Group, which is an industry leader in areas including banking, financial services, integrated entertainment, high end retailing and palm oil plantations.

ABOUT PREMIER RIDES INC.
Premier Rides is best known for its high-tech magnetic launch roller coasters. The company is also a global supplier of traditional roller coasters, observation wheels, towers, water rides and custom designed attractions. The company offers a service division supplying engineering support, complete ride and train rehab, and it maintains and offers a spare parts service on a 24-hour emergency basis. The company is headquartered in Baltimore, Maryland and has additional U.S., Canadian, European, and Asian offices.

Judith Rubin
Judith Rubin ([email protected]) is a leading journalist, publicist, strategist, blogger, content marketing specialist and connector in the international attractions industry. She excels at writing about all aspects of design and technical design, production and project management. Areas of special interest include AV integration and show control, lighting design and acoustics, specialty cinema, digital video and world’s fairs. Judith has ties to numerous industry organizations. From 2005-2020 she ran communications, publications and social media for the Themed Entertainment Association (TEA). In 2013, she was honored with the TEA Service Award. She was development director of IMERSA, and co-chair of the 2014 IMERSA Summit. She was publicist for the Large Format Cinema Association in the 1990s, now part of the Giant Screen Cinema Association (GSCA) and has also contributed to the publications of PLASA, IAAPA and the International Planetarium Society. Already making her mark as a magazine and book editor, Judith joined World’s Fair magazine in 1987, which introduced her to the attractions industry. Launching as a freelancer in the mid 1990s she has contributed to dozens of publications and media outlets including Funworld, Lighting&Sound America, Sound & Communications, Urban Land, The Raconteur and The Planetarian. She joined InPark in 2010. Judith earned a Bachelor of Fine Arts from Pratt Institute. She has lived in New York City and the San Francisco Bay Area, and now makes her home in Saint Louis, where she is active in the local arts and theater community.
Share
Facebook
Twitter
Linkedin
Email
Print
WhatsApp
Pinterest
ReddIt
Tumblr
Previous articleInPark at IAAPA Booth #970
Next articleBig Squirt Inc. announces winners of the 2010 Big Squirt!® Splash Awards