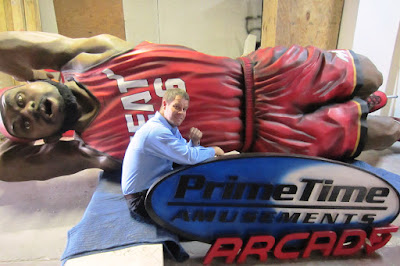 Fort Lauderdale, FL, USA — PrimeTime Amusements, a global operator, seller and event renter of video arcade machines and simulators, is proud to congratulate its President and Founder David Goldfarb and winning the inaugural South Florida Sun-Sentinel Top Workplaces for People on the Move awards, which recognized business leaders from around South Florida. The awards were launched in June 2012, included an interview with the nominees and judging panel, and culminated in an awards gala celebration at the W Fort Lauderdale on Thursday, November 15, 2012.

Goldfarb was recognized as an individual winner along with eight other local business leaders. According to the Sun-Sentinel, hundreds of applicants were whittled down to approximately 40 finalists and ultimately nine winners. The judging panel featured six community leaders from the private and non-profit sectors, who selected those individuals and/or businesses that best represented excellence in either developing young professionals or by the individuals’ contributions to their respective organization and community. For more information, visit Sun-Sentinel TWP Workplace.

“I’m thrilled to be named a winner by the South Florida Sun-Sentinel,” said David Goldfarb, President of PrimeTime Amusements. “As a business that’s been in the South Florida community for more than two decades, there is no greater honor than to be recognized by a publication, such as the Sun-Sentinel, that follows and understands the market as a whole.”

Goldfarb founded PrimeTime Amusements in 1992. Since then, Goldarb has turned PrimeTime Amusements into one of the most respected and successful arcade, coin-op amusements companies in the industry. Goldfarb attributes the growth and success of PrimeTime Amusements to his focus on diversifying, depending on a small but dedicated team of employees, and always looking for the next opportunity. He is also heavily involved in the South Florida community, co-founding First & Alton, a charity dedicated to helping Haiti get back on its feet. Goldfarb is fluent in Spanish, travels extensively to South America and around the world for business, and lives in Miami, Florida.

Joe Kleimanhttp://wwww.themedreality.com
Raised in San Diego on theme parks, zoos, and IMAX films, InPark's Senior Correspondent Joe Kleiman would expand his childhood loves into two decades as a projectionist and theater director within the giant screen industry. In addition to his work in commercial and museum operations, Joe has volunteered his time to animal husbandry at leading facilities in California and Texas and has played a leading management role for a number of performing arts companies. Joe previously served as News Editor and has remained a contributing author to InPark Magazine since 2011. HIs writing has also appeared in Sound & Communications, LF Examiner, Jim Hill Media, The Planetarian, Behind the Thrills, and MiceChat His blog, ThemedReality.com takes an unconventional look at the attractions industry. Follow on twitter @ThemesRenewed Joe lives in Sacramento, California with his wife, dog, and a ghost.
Share
Facebook
Twitter
Linkedin
Email
Print
WhatsApp
Pinterest
ReddIt
Tumblr
Previous article
Astana, Kazakhstan Chosen by BIE as Site of Expo 2017
Next article
InfoComm University Returns to Amsterdam