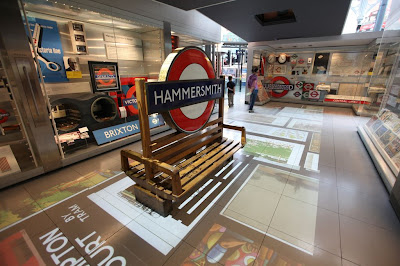 Fredrikstad, Norway — Situated in Covent Garden Market, London’s most frequented tourist hot spot, the London Transport Museum utilises projectiondesign F3+ and F1+ series projectors throughout the museum’s exhibit areas to tell the story of transport within London. The projection system was installed and maintained by global systems integrator, Electrosonic in 2007 and has been working non-stop ever since.

“In 1933, Chief Executive, Frank Pick’s mantra was ‘fitness for purpose’ and he believed that good design was essential. This principle applies to the design of technology in our gallery,” explains Rob Lansdown, Chief Projects and Infrastructure Officer at London Transport Museum. “We use projection to show how this unique design culture was developed across the company’s entire range, from vehicles and architecture to information signs and publicity. Our requirements in 2007 were for high-resolution projectors that would be stable over time as well as produce outstanding image quality in various ambient light levels and, which required minimum maintenance over the lifetime of the exhibit. We are very pleased with how well the projectors have performed.”

F1+ projectors are installed in a specially designed ceiling mount to project a massive 12-meter floor canvas. The exhibit takes advantage of projectiondesign’s high brightness, accurate colour capabilities and 24/7 failsafe operation. Visitors can see the collection of 5,000 posters and art collection for themselves as they walk through the exhibit.

projectiondesign F3+ and F1+ series projectors are used to communicate the story of London in major exhibits such as Victorian transport, World’s first underground, Pioneer tube, Travel revolution, Growth of suburbia, London in the 1920s and 1930s, London transport at war, London Icons and Transport futures.

“Our museum has no moving parts, so through projection, we are able to visualise the scale, size and complexity of London’s transport,” adds Lansdown.

“The building is an English Heritage grade II listed former Victorian flower market, which relies on natural cooling and heating. As with all technology, heat is an issue for us, and Electronsonic designed specially mounted projection systems.”

Anders Løkke, Marketing Director at projectiondesign says: “the London Transport Museums relies heavily on the 24/7 use and stable image qualities over time. We’re delighted that they have used our technology to showcase such an important exhibition.”

London Transport Museum welcomes thousands of visitors each week. It also hosts conferences and exhibitions for the visitor attractions industry throughout the year.

About projectiondesignprojectiondesign is a Norwegian company that designs, manufactures and markets a range of high performance projectors for professional, business and consumer applications. Amongst its core markets are high resolution scientific visualization, visual training and simulation, medical imaging, broadcast and post production, public media and entertainment. Numerous industry milestones that distinguish projectiondesign’s award winning, innovative technology include the introduction of the world’s first single-chip SXGA DLP projector in 2002, the first commercially available 1080p DLP projector in 2006, the first WUXGA resolution DLP projector, and the first portable and high-resolution active 3D stereoscopic projector in 2008. In 2009, projectiondesign introduced its first 3-chip projector and debuted LED illumination. 2010 signified the company’s first image warp and blend product with the Multi Image Processors, as well as the world premiere of the WQXGA resolution (2,560 x 1,600) projector, and revolutionary patented Remote Light Source technology. The entire professional product range is warranted for 24/7 usage. projectiondesign is located in Fredrikstad, Norway, with representatives in more than 20 offices throughout the world, and regional headquarters in New York and Beijing.

Joe Kleimanhttp://wwww.themedreality.com
Raised in San Diego on theme parks, zoos, and IMAX films, Joe Kleiman would expand his childhood loves into two decades as a projectionist and theater director within the giant screen industry. In addition to his work in commercial and museum operations, Joe has volunteered his time to animal husbandry at leading facilities in California and Texas and has played a leading management role for a number of performing arts companies. Joe has been News Editor and contributing author to InPark Magazine since 2011. HIs writing has also appeared in Sound & Communications, LF Examiner, Jim Hill Media, and MiceChat. His blog, ThemedReality.com takes an unconventional look at the attractions industry. Follow on twitter @ThemesRenewed Joe lives in Sacramento, California with his fiancé, two dogs, and a ghost.
Share
Facebook
Twitter
Linkedin
Email
Print
WhatsApp
Pinterest
ReddIt
Tumblr
Previous articleDiscovery Place Opening Photographic Exhibition on World of Coffee
Next articleMummies of the World Opens Sept. 29 in San Antonio