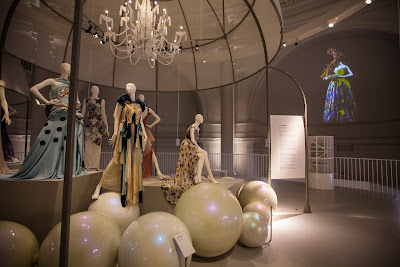 Fredrikstad, Norway — Proving once again its ability to provide projection solutions that are ‘tailor made’ to the application, Norway’s projectiondesign® has supplied four pairs of F32 DLP® projectors to a special exhibition at London’s Victoria and Albert Museum (V&A).

The design for the exhibition’s AV systems was undertaken by Sysco, with on-site integration and implementation by Electrosonic. “The exhibition is on two levels and occupies a splendid domed space, with four alcoves leading off it,” explains Bob Simpson, Founder of Electrosonic. 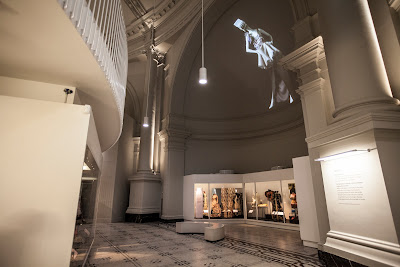 The four-alcove walls form curved projection surfaces that are taller than they are wide, necessitating the use of a pair of vertically stacked, edge-blended projectors for each alcove. With no alternative but to use the upper level of the exhibition display as the location for the projectors, the integration team designed special housings for them, colour-matched to the décor and perforated to allow for ventilation.

“In meeting the specific requirements of this installation, we turned to projectiondesign as they were the only manufacturer able to supply us with a stylish and compact F32 projector solution that uses very wide-angle lenses and precision optics, together with a lot of fine-tuning which is very important for a project like this. As well as the their installation flexibility, the F32s are capable of running at a very high resolution, WUXGA, which perfectly conveys the image quality, colour accuracy, sharpness and brilliance of the video sequences. The projectors also have a low cost of ownership which is a very attractive benefit for the V&A.” 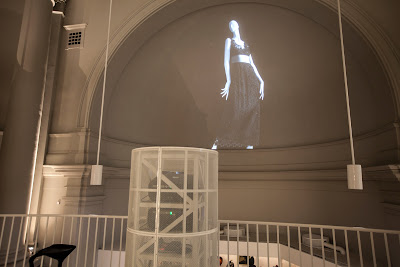 “It was a lot of work to get everything running right, but the end result is extremely nice!”

Anders Løkke, Marketing Director, projectiondesign, says: “The ability to provide projectors to match the specific requirements of installations is one of the things that sets projectiondesign apart from other manufacturers. Around 7,500 people per week are visiting the V&A’s Ballgowns exhibition, and we are delighted to have played such a key role in bringing this landmark project to fruition.”

Titled ‘Ballgowns: British Glamour Since 1950’, the exhibition presents 60 ballgowns from 1950 to the present day. Displayed over two floors, Ballgowns shows specially-made designs for social events such as private parties, royal state occasions, debutante balls, opening nights and red carpet events. Tour de force eveningwear from the V&A’s vast collection by designers such as Norman Hartnell, Victor Stiebel, Zandra Rhodes, Catherine Walker, Jonathan Saunders and Hussein Chalayan are on show, as well as dresses fresh from the catwalk shows of Roland Mouret, Giles, Erdem, Roksanda Illincic, Antonio Berardi and Mary Katrantzou. The result is a stunning display of British fashion design at its most elegant and evocative – made all the more atmospheric by the creative use of AV technology.

“The V&A specially commissioned some very fine photographs of some of the exhibits, by fashion photographer David Hughes, so it seemed natural to try to incorporate them into the exhibition. This was done by Rollo Hollins of production group Fletcher Wilson, who designed video sequences to appear in the alcoves,” adds Simpson.

About projectiondesign
projectiondesign is a Norwegian company that designs, manufactures and markets a range of high performance projectors for professional, business and consumer applications. Amongst its core markets are high-resolution scientific visualization, visual training and simulation, medical imaging, broadcast and post production, public media and entertainment. Numerous industry milestones that distinguish projectiondesign’s award winning, innovative technology include the introduction of the world’s first single-chip SXGA DLP projector in 2002, the first commercially available 1080p DLP projector in 2006, the first WUXGA resolution DLP projector, and the first portable and high-resolution active 3D stereoscopic projector in 2008. In 2009, projectiondesign introduced its first 3-chip projector and debuted LED illumination. 2010 signified the company’s first image warp and blend product with the Multi Image Processors, as well as the world premiere of the WQXGA resolution (2,560 x 1,600) projector, and revolutionary patented Remote Light Source technology. The entire professional product range is warranted for 24/7 usage.

projectiondesign is located in Fredrikstad, Norway, with representatives in more than 20 offices throughout the world, and regional headquarters in New York and Beijing.

Joe Kleimanhttp://wwww.themedreality.com
Raised in San Diego on theme parks, zoos, and IMAX films, InPark's Senior Correspondent Joe Kleiman would expand his childhood loves into two decades as a projectionist and theater director within the giant screen industry. In addition to his work in commercial and museum operations, Joe has volunteered his time to animal husbandry at leading facilities in California and Texas and has played a leading management role for a number of performing arts companies. Joe previously served as News Editor and has remained a contributing author to InPark Magazine since 2011. HIs writing has also appeared in Sound & Communications, LF Examiner, Jim Hill Media, The Planetarian, Behind the Thrills, and MiceChat His blog, ThemedReality.com takes an unconventional look at the attractions industry. Follow on twitter @ThemesRenewed Joe lives in Sacramento, California with his wife, dog, and a ghost.
Share
Facebook
Twitter
Linkedin
Email
Print
WhatsApp
Pinterest
ReddIt
Tumblr
Previous article
Ballgowns at the V&A
Next article
Gaylord Entertainment Renamed Ryman Hospitality; Marriott Now Managing Ryman Hotels and Nashville Attractions