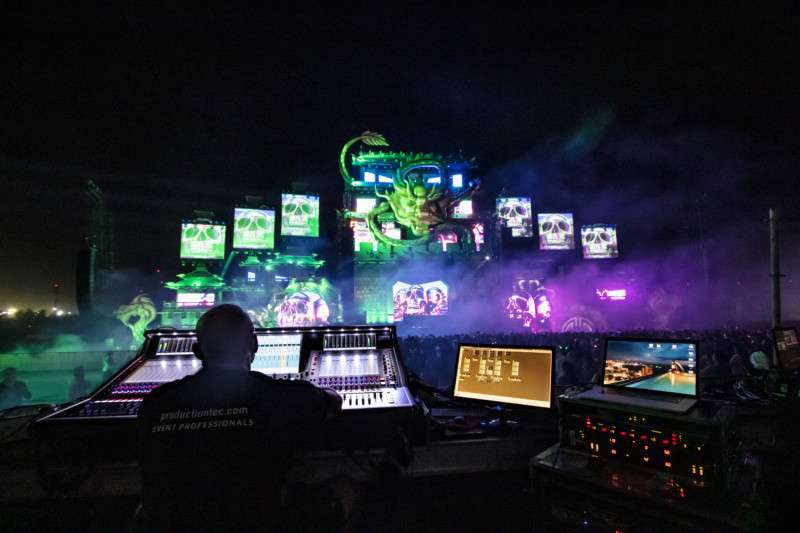 Protec were called upon by their clients Envie Events to provide full AV support for ‘Bao: The Final Frontier’ EDM festival at Meydan Racecourse, Dubai. Working with Envie before on Sensation and Unite with Tomorrowland, Protec were delighted to continue this partnership and rise to the challenge on what, according to baofestival.com, promised to be a “two-day extravaganza of unrivalled entertainment and music,” and “a production of unparalleled show-stopping grandeur.”

Massive crowds were attracted to the theatrical display and phenomenal line-up of world class DJs. Artistes included the top 2 DJs of the DJ Mag top 100 Martin Garrix, and Dimitri Vegas &Like Mike as well as heavyweights Afrojack, Don Diablo, Nervo, R3hab and more. 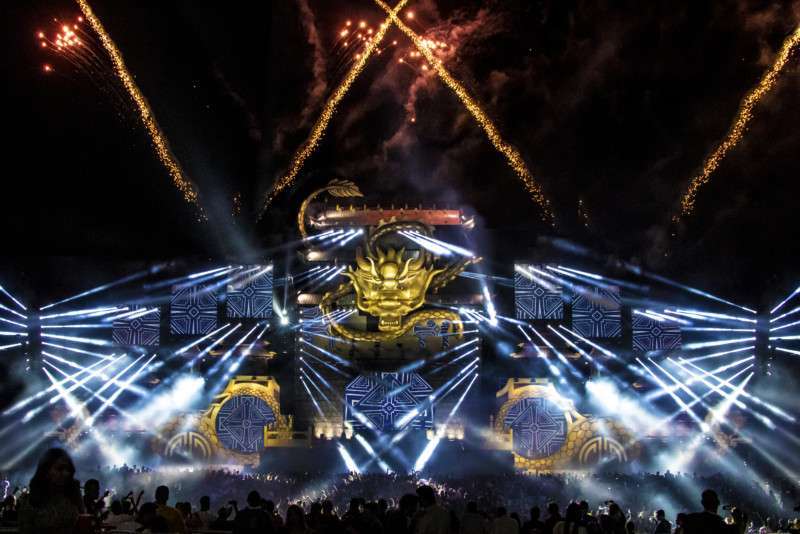 Mel Deighton, Protec’s project manager, worked closely with other suppliers to make sure the show was delivered beyond expectation and on time. Faced with considerable challenges along the way, he credits his team on delivering under pressure.

“Due to the complexity of the production we were on-site 11 days for set-up, 2 days for the show and we were fully loaded out 2 days later. It was a challenging build which required cooperation with the staging company. Our LED and lighting needed to be rigged intermittently and built into the structure which took some extra time and careful planning. Unfortunately, we got unlucky with the weather as a thunderstorm hit us a few days before show meaning our timeline was significantly affected. Thankfully we had ample resources and a committed team to ensure we delivered on time and as promised.” 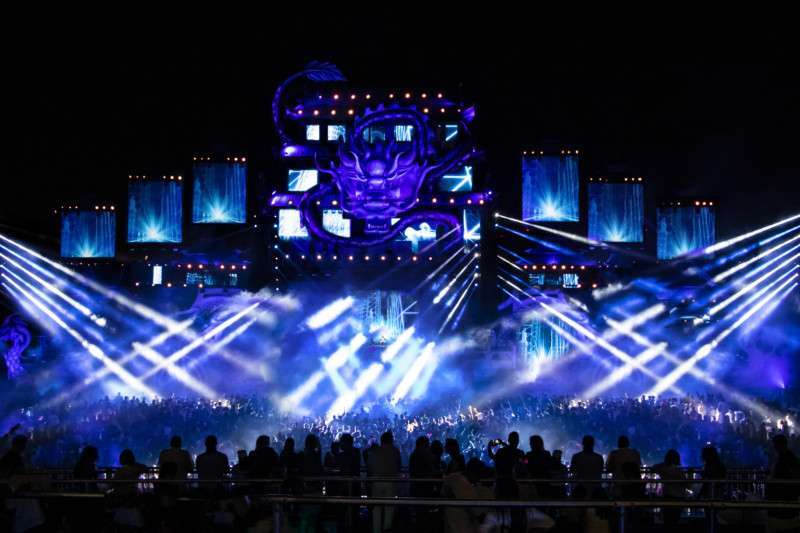 Protec’s Chris McAleese operated audio at FOH and he gave us an insight into what he used to deliver sound that had both the crowd and DJs completely immersed in the moment.

“We used 32 of the powerful L’Acoustics K1 line array (16 a side) and 30 of the classic but phenomenal L’Acoustics V-DOSC (15 a side). This was supplemented with L’Acoustics K2 flown under for downfill and L’Acoustics Kara for front coverage and on stage either side of the DJ. 40 SB28 subwoofers took care of the low end quite nicely. We used a Digico SD5 desk and Dante networking from FOH to a Focusrite Rednet to breakout the AES 3 signal to amps stage side.”

Explaining his choices Mr. McAleese elaborates: “We chose L’Acoustics K1 and V-DOSC because of the distance we had to cover and due to the type of venue, which didn’t allow for delays. Coverage was linear throughout the venue and frequency response throughout was smooth.”

Video used the state of the art Barco E2 linked with Barco S3 and Barco EX to provide 3 x 4k input and 3 x 4k output which was then split into 10 Full HD outputs distributed over fibre optic cable to the 12 Barco HDF W30K projectors (6 backup) as well as to the 4 LED processors backstage and the live backup processors there. There were over 300 panels of 6mm and 9mm LED used and all the necessary fibre optic distribution over Lightware 220 Pro Transmitter and Receiver. 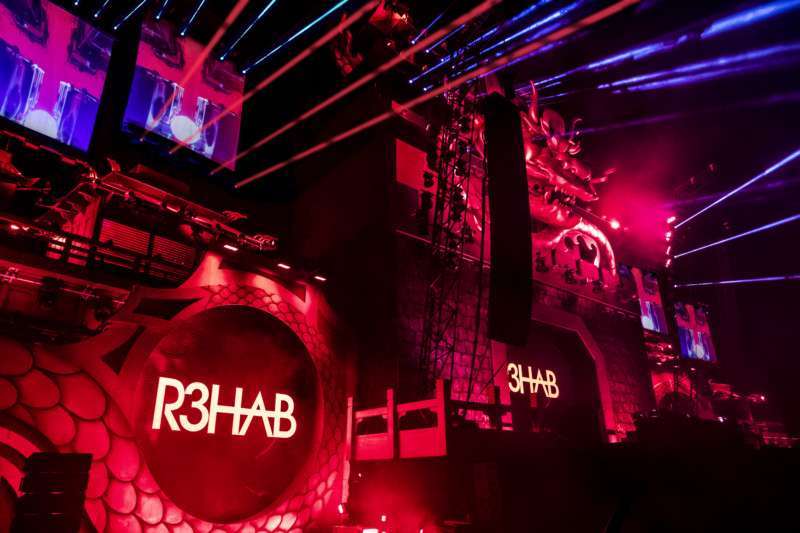 Protec’s Florian Hoss takes us through the challenges posed by such an ambitious production. “The major challenge we faced was the building of the LED gradually into the set which unfortunately was met with delays due to the rain and high winds. This had a trickle-down effect which led to a shortened period of time for our setup. But with excellent equipment, a strong team and an impressive amount of processing power we delivered a large scale show we are proud of.”

The lighting was designed by Ronnie Santegoeds of 4Light ShowProjects and operated by the 4Light team. He gives us an insight into his design.

“I chose the Scenius Unico as it has a lot of output, a large lens, nice colour mixing and useful gobos. The Mythos is a good multipurpose fixture and is useful as a wash and a beam. The Robe Pointe is the best versatile beam fixture on the market and the K20 is a nice big LED wash with a nice zoom and output. The SGM P2 and P5 are nice LED floods which are suitable for outdoor use and the old school Parcan worked nicely as blinders. We used Wyg R41, for the design and technical drawings. Besides that we use our own in-house software for datasheets, and stickers for fixtures, cabling, dimmers and network. For testing fixtures we used an iPad, running the Fixture Tester App from Bart van Stiphout. With this app, the iPad streams ACN, and the ELC and MA2 Nodes are outputting Dmx towards the fixtures.”

Mr. Santegoeds explained due to the weather they had a delay but praised the crew for getting everything done on time: “The Protec team and entire crew were very motivated to get the job done and done professionally. Big thumbs up for Mel, Aaron, Luke and the entire team for their efforts to ensure the show went ahead on time and looked great!” 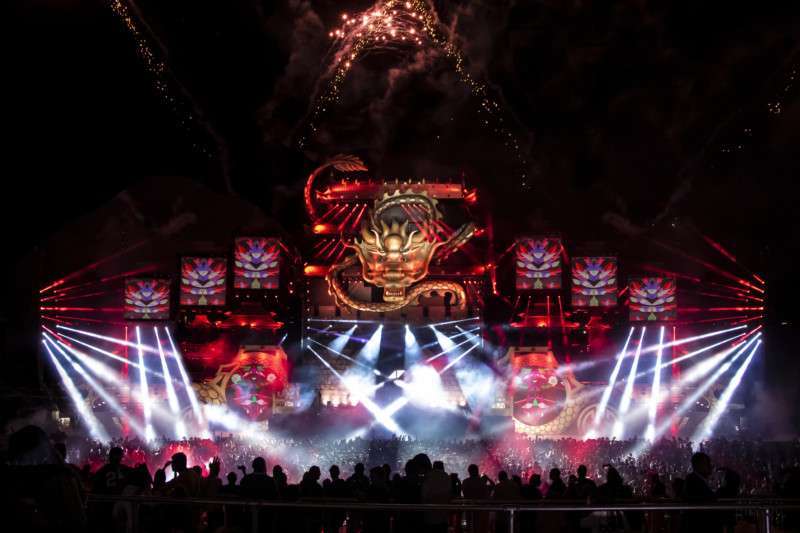 Protec were proud to be a part of a festival that celebrated the Chinese culture and its relationship with the Middle East. Mel Deighton reflects on the success of this show and working with Envie Events.

“We were proud to be a part of such an artistic production. The show looked stunning with great visuals, a stunning lighting design and a world class lineup of DJs who were all incredibly positive about the audio package and sharp visuals. I’d like to particularly congratulate my team on their efforts, long hours and dedication to the event. These professionals are what the Protec reputation is built on. We were delighted to work with Envie Events once again and look forward to supporting their next big festival!”

These final words from event director Tessa Sprangemeijer, of Envie Events, pay testament to Protec’s efforts and contribution to BAO.

“A production the scale of BAO requires nothing but the best from all teams and suppliers.  Therefore we’re happy to once again have enlisted Protec who, with their extensive experience in AV Technology in the region, took this project to the next level. The difficulties faced with a detailed stage of this magnitude and the storms we had to endure had everyone on their toes, but teamwork, dedication and in-depth knowledge ensured everyone came together and brought forward solutions for every obstacle faced. In the end this surmounted to a show like never before seen in the region, we’re very proud!

“Protec has been the cornerstone of the events industry in the Middle East since 1999. Established by industry leader and habitual pioneer Stephen Lakin, Protec has grown into the region’s most committed and consistently reliable event equipment rental company, producing live events that are truly spectacular, leading edge, and globally acclaimed. Now also based in Saudi Arabia, the UK and operating across Europe, the Middle East, Africa, and Asia, they bring their vast experience and technical resource palette to the global market.”

Joe Kleimanhttp://wwww.themedreality.com
Raised in San Diego on theme parks, zoos, and IMAX films, InPark's Senior Correspondent Joe Kleiman would expand his childhood loves into two decades as a projectionist and theater director within the giant screen industry. In addition to his work in commercial and museum operations, Joe has volunteered his time to animal husbandry at leading facilities in California and Texas and has played a leading management role for a number of performing arts companies. Joe previously served as News Editor and has remained a contributing author to InPark Magazine since 2011. HIs writing has also appeared in Sound & Communications, LF Examiner, Jim Hill Media, The Planetarian, Behind the Thrills, and MiceChat His blog, ThemedReality.com takes an unconventional look at the attractions industry. Follow on twitter @ThemesRenewed Joe lives in Sacramento, California with his wife, dog, and a ghost.
Share
Facebook
Twitter
Linkedin
Email
Print
WhatsApp
Pinterest
ReddIt
Tumblr
Previous articleG4 Complete Entertainment opens first FEC location in Utah with Semnox Parafait Management Platform
Next articleFirst MONOPOLY DREAMS interactive attraction set to open in Hong Kong