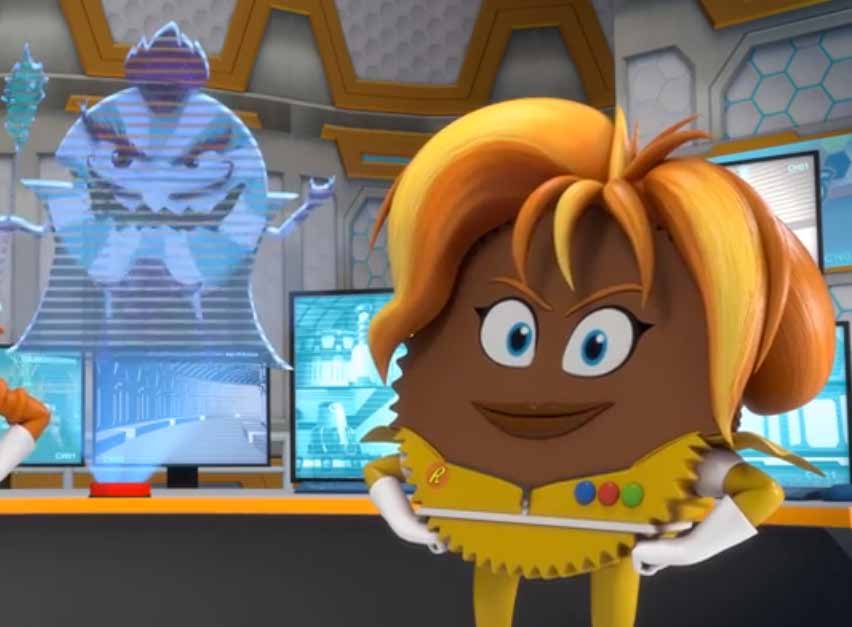 by Philip Hernandez and Joe Kleiman

ABOVE: Character development was a critical element in the design work done by Raven Sun Creative. Commander Cup instructs guests on their mission to defeat Mint the Merciless and The League of Misfit Candy.

On May 25, 2019, Hersheypark opened “Reese’s Cupfusion®,” an interactive, candy-centric, media-rich dark ride that signals a new direction and vision for the popular, historic, 112-year-old park as it transitions and expands with original, new regions and attractions themed to the chocolate products of its namesake company.

Cupfusion has proven quite popular since opening. “We set a record for Memorial Day weekend attendance during the ‘Grand Unwrapping’ of Reese’s Cupfusion,” said Quinn Bryner, Director of Public Relations & Social Strategy for Hersheypark. “Since then, the feedback has been overwhelmingly positive with guests complimenting the new technology, the multi-level game play and the unique elements of the story.”

Reese’s Cupfusion at Hersheypark joins the ranks of immersive dark rides appearing at regional parks around the world that are setting a new standard for interactive attractions, providing unique, custom experiences that help parks to compete, differentiate themselves and grow their markets. This evolving, global trend has been an opportunity for creative and technical specialists to distinguish themselves and continue to break new ground (such as the unique feature of cooperative gameplay in Cupfusion, described in this article).

Reese’s Cupfusion marks the beginning of a major expansion and transformation to the park: Hershey’s Chocolatetown, opening in 2020 [see sidebar].

Raven Sun and Hersheypark had worked together before – in 2015 they designed Hersheypark’s Laff Trakk, a unique, indoor, spinning coaster that pays homage to the historic park’s funhouses of the past. Cupfusion replaced an earlier Hersheypark ride, Reese’s Xtreme Cup Challenge, which opened in 2006 and was built by Sally Dark Rides.

Louis Alfieri, Principal and Chief Creative Officer of Raven Sun Creative, which handled the overall concept and design of Cupfusion, talked about the design intent. “We wanted to create a four-season attraction to help the park expand its demographic reach to multiple generations – to be fun and engaging for all ages. We wanted to push the technology as far as possible to give the attraction as long a life as possible within the park. An overarching goal was to expand the brand connection with the guests and the park, using humor and playful interaction, the way Hersheypark wanted to communicate with guests.”

“In concepting this ride, we wanted to create original IP, story, characters, environment and a series of technical innovations from scratch – no easy task and we wanted to get the story right,” said Hersheypark’s Bryner.

Standing guard for some of the world’s favorite flavors is the mission of Reese’s Cupfusion. Guests are enlisted to protect the legendary Crystal Cup that collects and amplifies the love of chocolate and peanut butter to power the factory. Led by a strong female character – Commander Cup – guests become Reese’s Agent Trainees at the factory. They support the Commander in looking out for intruders and employing their amplifying devices against them. They are helping protect the world supply of Reese’s Peanut Butter Cups from the nefarious actions of Mint the Merciless and The League of Misfit Candy.

“There was a lot of exploration along the way about how to create this brand’s IP,” said Alfieri. “Once Hersheypark decided to focus on something that’s uniquely Hershey, we knew we wanted to incorporate the manufacture of Reese’s Peanut Butter Cups into the storyline. The power of brand storytelling is how we translate the brand into a range of spectrums, emotions and interactions with guests – building an experience into a series of emotional connections and touchpoints.”

Alfieri’s dark ride portfolio includes Transformers: The Ride at the Universal Studios parks in Singapore and Hollywood and the seven attractions that opened the Wanda Wuhan Movie Park, including one of China’s first flying theaters and a live stunt show integrated with 8K projection, and several patents including the Ultra Tower ride system.

The environment and world of the attraction were designed and built to keep the experience seamless in the perception of the guest, whether the elements exist on screen or 3D physical objects. (It was not desirable to rely solely on screens as these would have limited the depth or connection to characters that the creative team wanted.) To help achieve that consistency, every element in the attraction was built as a 3D environment in Maya and then composited and rendered as 1:1 stills (like screenshots) at 22’ tall x over 800’ in length. Alfieri said, “We went through a lot of testing and development to find a way – in 2D media – to render the characters in the foreground with a level of quality and resolution that works in both a physical and a media environment.” Show lighting helps balance and bring it all together.

To incentivize multiple playthroughs, the ride uses a gaming engine that produces real-time animation. “Many attractions involve either shooting at targets or having only one way to function within the game,” noted Alfieri. “We wanted this attraction to have layers of opportunity that allow guests to make many discoveries and come back for more the next time.”

Along with the new attraction, Hersheypark introduced another transformative feature, HPGO, the park’s free-of-charge RFID wristbands. The wristbands can communicate with the Hersheypark app, allowing Cupfusion riders to keep tabs on their scores year-round and download photos from their ride experience to their smartphones. For an additional fee, guests can add Fast Track, the park’s “skip the regular line” system, to their HPGO wristbands.

“Interactivity and competition are huge in Hersheypark. What makes this ride so special is that the entire family can ride and re-ride repeatedly. There are many gaming components that are part of this attraction that you will not catch the first time. In fact, you might not even catch it the second or third time and the entire family has to play together to get some of the more spectacular pieces of the game to come to life,” added Laura Woodburn Krolczyk, Assistant General Manager at Hersheypark.

The breakthrough development of cooperative gameplay was not only critical for Cupfusion, but also represents a leap forward for dark rides. Cooperative play allows families or new acquaintances to work together, adding more to the experience.

Within the Cupfusion story, guests have three main action paths to choose from: power the factory, try to stop the candy criminals, or get bonus points during cooperative play and release other characters. From a scoring perspective, guests can choose the format in which they want to engage each of these paths. “Guests can play one path, all three paths, or a combination thereof. It’s up to the guest when they’re in each of these areas to engage the game differently based on their taste or desire to play,” explained Alfieri.

Because there are two vehicles traveling together in Cupfusion, the screens are large – 22 feet tall and 22-60 feet wide in most cases. The screen in the finale scene is over 160 feet wide. “The cooperative play function we orchestrated for Cupfusion requires at least two of the four people in a vehicle – or two people in two different vehicles – to be in front of the same screen at the same time and jointly participate in activating certain components,” said Alfieri. “For example, guests might activate the cooperative action in the seasonal factory, triggering a sequence of purple lightning in the lab and bringing a peanut butter pumpkin to life; the pumpkin sits up and releases special bonus elements. Crazy Corn is one character released through that activity. We believe this new cooperative play function is a world’s first.”

The release of characters, bonus content, and future elements as hidden easter eggs and intermittently available targets was intentionally designed into the attraction from its inception to ensure a very large range of opportunities for discovery, rerideability, competition, and drive social interaction to share these discoveries.

“A challenge that we had here at Hersheypark was how can we take something like chocolate and create a story from it,” said Brewer Lister, Managing Director of Marketing at Hersheypark.

Reese’s Cupfusion is how Hersheypark answered its own challenge and it also models the park’s pending expansion in its overall buildout adding up to a multifaceted, themed realm in and of itself. Outside the ride building, two classic children’s rides have been given a thematic makeover, appearing as if they have been taken over by the villains of the ride. The theming continues to food and beverage offerings as well. “We have King Size Shakes: Slither, Squirm, and Mint the Merciless. We have BBLz™ drinks that are associated with the IP and funnel cakes too! It’s also the first time that we have done a fully themed exit retail that brings in all the IP,” added Vikki Hultquist, Hersheypark General Manager of Attractions & Entertainment.

Cupfusion focuses on connecting humor with the characters to make them relatable to guests. “The opportunity for Hershey was to turn their candy into characters, and the key to believable characters is the emotions behind them,” said Alfieri. “With Cupfusion, we wanted to capture the nostalgia of the brand but also make it fresh and new.”

As Bryner explains, “As we head into the expansion of Hershey’s Chocolatetown in 2020, Reese’s Cupfusion is an example of how Hersheypark can celebrate the public’s love of Hershey’s iconic brands and our shared roots with The Hershey Company.” • • •

The road to Chocolatetown

Located 15 miles north of the Pennsylvania state capital of Harrisburg, in the town of Hershey, Hersheypark opened in 1906 as a leisure park for employees of the Hershey Chocolate Company. In 1927, the park was placed under the umbrella of what is now known as Hershey Entertainment & Resorts, which also owns resorts and an AZA-accredited zoo as well as a stadium and two arenas that host professional sporting events and concerts.

Over a century-plus of operation, Hersheypark has grown into one of the largest and most popular theme parks in the US. The TEA/AECOM Theme Index estimated 3.37 million visits for Hersheypark in 2018 and ranked it as the 19th most-visited theme park in North America. The park’s close ties to its namesake chocolate manufacturer have provided it with unique IP not found in any other park – characters based on popular confections such as Hershey Bars, Hershey’s Kisses, Kit-Kat and Reese’s Peanut Butter Cups, among many others.

The $150 million transformational expansion is the largest in park’s history and a 23-acre development. Marquee elements include its 15th coaster – Candymonium, “the tallest, fastest, longest and sweetest” coaster at Hersheypark, a KISSES fountain, a new arrival experience, and five culinary additions, including a large new restaurant, an ice cream shop, a scratch confectionery kitchen and a Starbucks.

Joe Kleimanhttp://www.themedreality.com
Raised in San Diego on theme parks, zoos, and IMAX films, Joe Kleiman would expand his childhood loves into two decades as a projectionist and theater director within the giant screen industry. In addition to his work in commercial and museum operations, Joe has volunteered his time to animal husbandry at leading facilities in California and Texas and has played a leading management role for a number of performing arts companies. Joe has been News Editor and contributing author to InPark Magazine since 2011. HIs writing has also appeared in Sound & Communications, LF Examiner, Jim Hill Media, and MiceChat. His blog, ThemedReality.com takes an unconventional look at the attractions industry. Follow on twitter @themedreality Joe lives in Sacramento, California with his fiancé, two dogs, and a ghost.
Share
Facebook
Twitter
Linkedin
Email
Print
WhatsApp
Pinterest
ReddIt
Tumblr
Previous articleTEA 2020
Next articleTechnifex Co-Founder and Chairman Rock Hall to retire at end of 2019