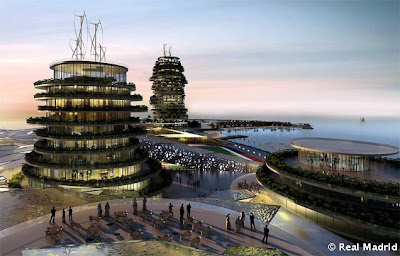 Madrid, Spain (March 22, 2012) — Real Madrid and the Government of Ras al-Khaimah presented plans for the Real Madrid Resort Island in the Presidential Balcony of the Santiago Bernabeu Stadium on Thursday afternoon. It is to be a tourism complex and theme park in the United Arab Emirates under the Real Madrid brand. The event was attended by President Florentino Perez and Dr. Khater Massaad, representative of the Government of Ras al-Khaimah and CEO of RAK Investment Authority. Jose Mourinho, Iker Casillas, Sergio Ramos, Karim Benzema, Football Director Miguel Pardeza, First Team Director Zinedine Zidane, Director of Institutional Relations Emilio Butragueño and former players Santamaria, Pachin and Amancio Amaro were also in attendance. 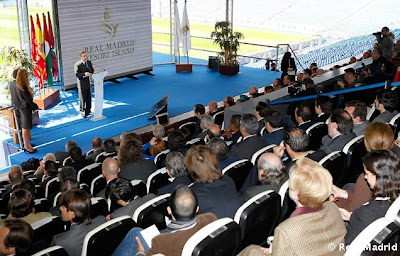 “When the Real Madrid Resort Island opens its gates, visitors will become part of the legend o this club, which strives to be eternal and universal. We adhere our name and potential to a unique location, a strategic meeting place and a project of unprecedented dimension located less than four hours away by flight of 2,000 million people. 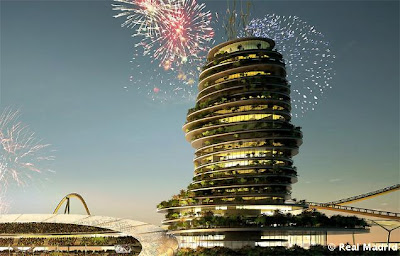 “Once again, the Santiago Bernabeu Stadium serves as the starting point of a thrilling project. The world of sports and Real Madrid again prove to have no boundaries and that football is a fantastic tool with which to make different people and cultures come together. This team’s fans are passionate wherever they may be and never give up. Their dreams motivate us on a daily basis. 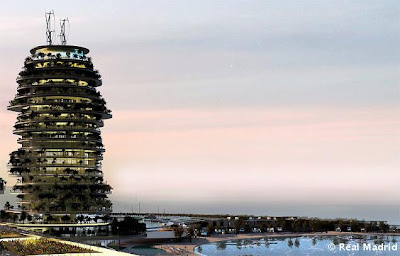 “Santiago Bernabeu gave Real Madrid the unique capacity to go beyond this country’s frontiers and those of us who administer this legacy are aware of the challenge that comes with handling what gave this club a mythical and legendary status. Real Madrid Resort Island will be a sports touristic complex of the highest level, covering 50 hectares in which tourism and sport will seduce millions of people in search of a quality leisurely activities. 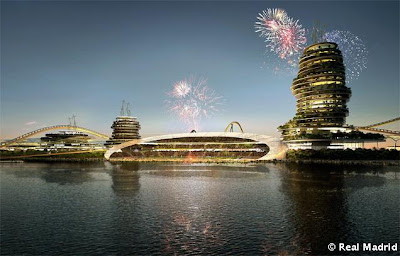 “This is a decisive and strategic step that will enhance the strength of this institution in the Middle East and Asia, a key region in which the passion for this club has been apparent. Our collaboration grows increasingly stronger and we are proud of it. Real Madrid and the Government of Ras Al Khaimah want to transmit the passion of Real Madrid and what it means throughout the world.” 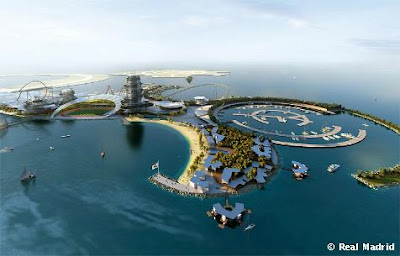 One billion US dollars have been invested in the project and it is expected to open in January 2015. It will be the first theme park on an artificial island to combine tourism and sports, and it will be the first recreational tourism complex built under the Real Madrid trademark.

Joe Kleimanhttp://wwww.themedreality.com
Raised in San Diego on theme parks, zoos, and IMAX films, Joe Kleiman would expand his childhood loves into two decades as a projectionist and theater director within the giant screen industry. In addition to his work in commercial and museum operations, Joe has volunteered his time to animal husbandry at leading facilities in California and Texas and has played a leading management role for a number of performing arts companies. Joe has been News Editor and contributing author to InPark Magazine since 2011. HIs writing has also appeared in Sound & Communications, LF Examiner, Jim Hill Media, and MiceChat. His blog, ThemedReality.com takes an unconventional look at the attractions industry. Follow on twitter @ThemesRenewed Joe lives in Sacramento, California with his fiancé, two dogs, and a ghost.
Share
Facebook
Twitter
Linkedin
Email
Print
WhatsApp
Pinterest
ReddIt
Tumblr
Previous articleNational Postal Museum Puts New Stamp on Hindenburg and Titanic Disasters
Next articleApproaching SeaWorld’s 2012 Attractions