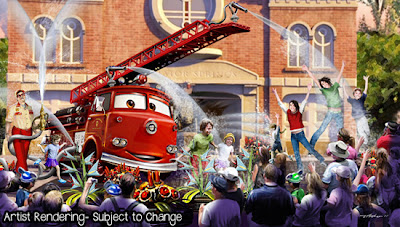 “Streetmosphere” at Cars Land, Disney Calfornia Adventure.  According to the Disney Parks Blog:
Big and red on the outside, gentle and good-natured on the inside, Red the Fire Truck shows up with his sirens blaring and his bell ringing, heading to meet up with his good buddy, a Volunteer Firefighter. The Firefighter lets everyone know the flowers in the area need watering. It’s “Red to the Rescue,” but each time the Firefighter attempts to use Red’s hose, it backfires on him! In all the fun, the plants manage to get wet, and you might too! 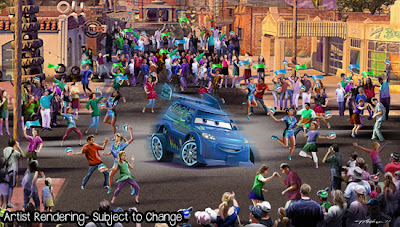 “Streetmosphere” at Cars Land, Disney California Adventure.  According to the Disney Parks Blog:
Bringing a completely different kind of beat to the street is “DJ’s Dance & Drive.” DJ, the ultimate party car, rolls into town with his giant speakers, built-in disc changer and his very own dance party, led by a girl named Spinner. This gang stops traffic everywhere they go, creating a spontaneous, interactive dance party. Spinner and the crew teach us moves like the Overdrive, the Reverse and the Hairpin Turn, while DJ calls up the hits, from “Life in the Fast Lane” to “Car Wash.” DJ’s going to shift Cars Land into high gear! 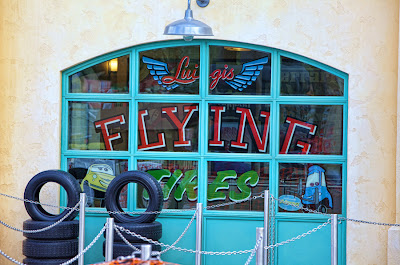 Luigi’s Flying Tires at Cars Land, Disney California Adventure.  Although not concept art, this photo is one of three recently released by Disney Parks showing entrance signage at the new Cars Land attractions.  It should be noted that the sign in the lower right corner designates the presenting sponsor on this attraction as Alamo Rent-a-car, the official rental car company of the Disneyland Resort. There is no indication at this time if other auto-related corporate affiliates of the Disneyland Resort, such as Chevron, AAA, or Honda will also sponsor attractions in the new land.

Test Track, Epcot.  The new attraction will be focused on the Chevrolet Design Center, however new new details on the revised attraction have not yet been released. 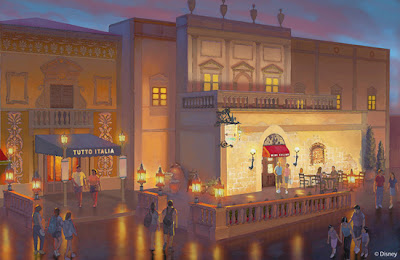 Tutto Gusto Wine Cellar, Italy, Epcot.  From the Disney Parks Blog:
Gusto takes over the former lobby space of Tutto Italia and extends back toward Via Napoli. The 96-seat Tutto Gusto will be a more intimate space, with décor inspired by an Italian wine cellar with stone walls and floors, and vaulted ceilings and a fireplace in the dining room. Hours will be 11:30 a.m. to 9 p.m.

The chefs have created a small-plate menu that takes guests on a fabulous culinary tour of Italy. There are six sections and all sorts of wonderful tastes: Affettati (cured, sliced meats); Formaggi (Italian cheeses); Panini (sandwiches); Piccoli Piatti (small plates); Cavatappi (a type of pasta), and Dolci (sweets).

With more than two dozen small plates with everything from a taste of prosciutto de Parma to creamy burrata cheese and mussels with white wine, we can’t wait for a taste. The pasta dishes all are made with cavatappi, a corkscrew-shaped pasta, and include three versions: tomato and bufala mozzarella; shrimp, chilis, garlic and tomato; and arugula, potato, pancetta, tomatoes and asiago cheese. Classic Italian!

More than 200 Italian wines, including sparkling, reds and whites, and beers such as La Rossa, Moretti and Menabrea will be offered. Grappas – a distilled drink made from what remains of grapes after they have been pressed for winemaking – will be another specialty, or just sip an espresso or cappuccino. 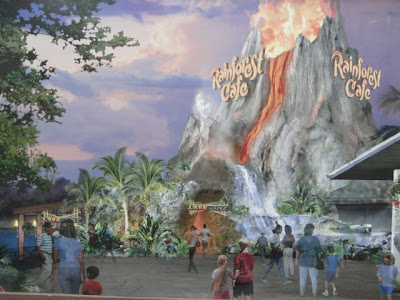 Rainforest Cafe, Downtown Disney, Walt Disney World.  Owned and operated by Landry’s Restaurants, Rainforest Cafe is receiving an entirely new volcano structure which will be laden with special effects as well as a new bar called the Lava Lounge.  The refurbishment is expected to be completed by October, but the existing operation will remain open during the construction period.

Joe Kleimanhttp://wwww.themedreality.com
Raised in San Diego on theme parks, zoos, and IMAX films, InPark's Senior Correspondent Joe Kleiman would expand his childhood loves into two decades as a projectionist and theater director within the giant screen industry. In addition to his work in commercial and museum operations, Joe has volunteered his time to animal husbandry at leading facilities in California and Texas and has played a leading management role for a number of performing arts companies. Joe previously served as News Editor and has remained a contributing author to InPark Magazine since 2011. HIs writing has also appeared in Sound & Communications, LF Examiner, Jim Hill Media, The Planetarian, Behind the Thrills, and MiceChat His blog, ThemedReality.com takes an unconventional look at the attractions industry. Follow on twitter @ThemesRenewed Joe lives in Sacramento, California with his wife, dog, and a ghost.
Share
Facebook
Twitter
Linkedin
Email
Print
WhatsApp
Pinterest
ReddIt
Tumblr
Previous articleVIDEO: Universal’s 2012 Attractions
Next articleA Very Special Attraction Preview From SeaWorld Orlando Just In Time for World Penguin Day