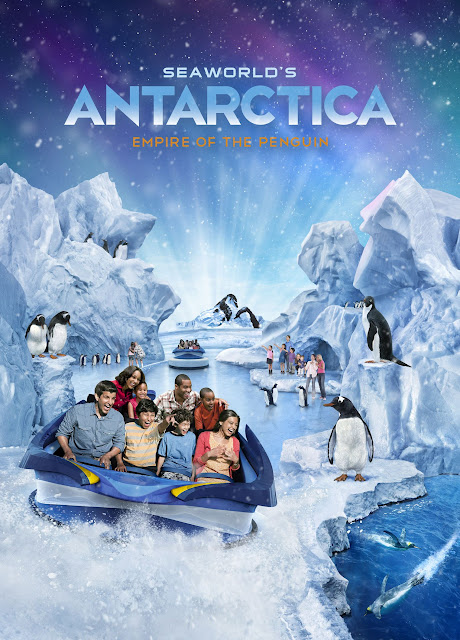 Orlando, FL, USA (April 24, 2012 – One Day Before World Penguin Day) — At Pow Wow in Los Angeles, one of the world’s top travel shows,  SeaWorld Orlando designers and marketing execs revealed more details of the park’s 2013 new attraction and its largest-ever expansion, Antarctica – Empire of the Penguin. Details revealed included:
Background for Antarctica – Empire of the Penguin:
Through the years, SeaWorld Orlando has taken guests to far-flung corners of the globe, immersing them in the character and feel of exotic places and introducing them to unique worlds of adventure.

But no journey is bigger — or as incredible — as the one to come in 2013. It’s a voyage to the bottom-of-the-world, to the coldest and windiest continent, to a place of ice more than 9,000-feet thick. It’s a journey to Antarctica and to the empire of the penguin.

Guests will be surrounded by the sights, sounds and awesome encounters found in this frozen place, embarking on a one-of-a-kind ride and an incredible, first-of-its-kind family adventure.

They’ll experience the mystery and wonder of life on the ice through the eyes of a penguin, sensing the beauty and drama of their often-dangerous habitat. Antarctica – Empire of the Penguin combines closer-then-ever animal connections with state-of-the-art interactive ride technologies for adventures that are different each time.

It’s an all-family experience that could only come from SeaWorld and can only be found at SeaWorld Orlando. “Only SeaWorld and its parks can take you on these journeys or bring these experiences to you,” said Terry Prather, SeaWorld Orlando’s president. “We’re excited about what the future holds for our parks and our fans.”

More details can be found at www.SeaWorldOrlando.com.

Joe Kleimanhttp://wwww.themedreality.com
Raised in San Diego on theme parks, zoos, and IMAX films, InPark's Senior Correspondent Joe Kleiman would expand his childhood loves into two decades as a projectionist and theater director within the giant screen industry. In addition to his work in commercial and museum operations, Joe has volunteered his time to animal husbandry at leading facilities in California and Texas and has played a leading management role for a number of performing arts companies. Joe previously served as News Editor and has remained a contributing author to InPark Magazine since 2011. HIs writing has also appeared in Sound & Communications, LF Examiner, Jim Hill Media, The Planetarian, Behind the Thrills, and MiceChat His blog, ThemedReality.com takes an unconventional look at the attractions industry. Follow on twitter @ThemesRenewed Joe lives in Sacramento, California with his wife, dog, and a ghost.
Share
Facebook
Twitter
Linkedin
Email
Print
WhatsApp
Pinterest
ReddIt
Tumblr
Previous articleRecent Disney Parks Concept Art
Next articleSix Flags Q1 2012 Financials