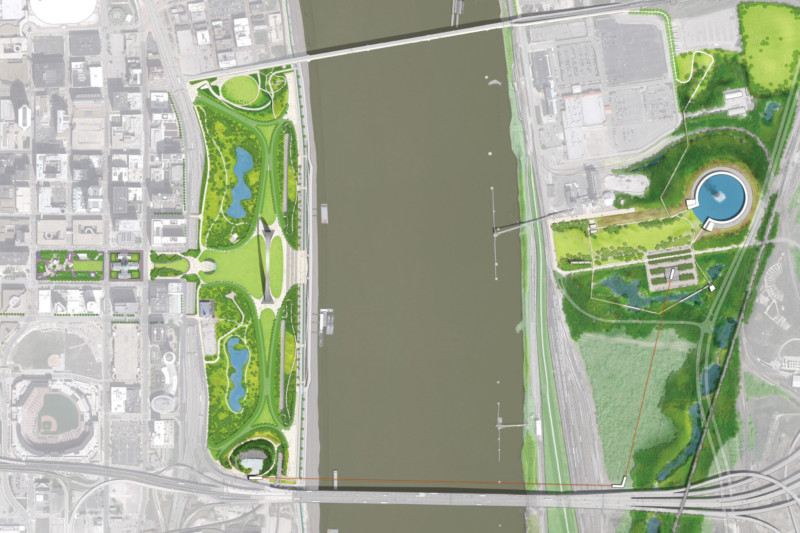 ST. LOUIS, Missouri USA – David Donoghue with Haley Sharpe Design, the team providing planning and design for exhibits at the Museum of Westward Expansion under the Arch and the Old Courthouse, provided a glimpse into the new and expanded exhibits and programming CityArchRiver 2015 will bring, at a public meeting April 16.  Working with park historians, local scholars and a Universal Design Group, Haley Sharpe is creating an experience that will be new, interactive, relevant and appealing to all generations.

“We want to make the museum experiences at the Arch and the Old Courthouse accessible and relevant to a wide variety of audiences,” said Donoghue. “The stories we are developing for these museums will explore both the story of America’s westward expansion and also provide more focus on St. Louis’ pivotal role in that story.”

CityArchRiver 2015 Foundation announced April 16 that plans to enhance the Arch experience for everyone remain on track for completion by October 2015. Partner organizations, including Great Rivers Greenway, the Missouri Department of Transportation (MoDOT) and the National Park Service, detailed coming traffic changes and riverfront improvements at the third annual Report to the Community.  New museum exhibit designs for the Old Courthouse and the museum under the Arch were also unveiled.

“All of us are moving forward together to complete these transformative changes by October 28, 2015, and enhance the Arch experience for everyone,” said Walter Metcalfe, chairman of CityArchRiver 2015 Foundation. “Over half of the components of this project are now fully funded and construction is starting this year.”

Over the last year, partners have continued to collaborate on a comprehensive design for the Arch grounds to include improvements that will enhance the visitor experience with an expanded Museum, access to the river and trails to the north and south of the Arch, and increased park space and pathways. The project received a boost on April 2, when voters in St. Louis County and City approved Proposition P which will provide funding for the CityArchRiver 2015 project and regional parks and trails.

St. Louis area district engineer Ed Hassinger confirmed that MoDOT will break ground on roadway improvements this summer, marking the beginning of construction on the Park Over the Highway component. These changes will provide better access between the city, the Arch and the river and substantially improve neighboring streets for vehicles and pedestrians alike.

“MoDOT has been a committed partner in CityArchRiver 2015 from day one,” said Hassinger. “We are on schedule to start construction this summer and will come in significantly under budget for the roadway improvements contained in this project.”

Great Rivers Greenway District has championed the Arch and riverfront as the backbone for the River Ring – a regional system of trails that connects St. Louis City, St. Louis County and St. Charles County. The organization is responsible for the public funds generated from the passage of Proposition P and is leading development of the riverfront portion of the project. Great Rivers Greenway has appointed a Citizen Advisory Committee to provide public input on the visitor experience, programming and sustainability.

“We thank the voters of St. Louis County and City for choosing to invest in this project and our parks and trails,” said Susan Trautman, executive director of Great Rivers Greenway.  “We are committed to working with the public and all project partners to create a more connected region through enhancing the visitor experience at the riverfront and on the Arch grounds. This project fits perfectly with our organization’s goal to make the St. Louis region a better place to live.”

Project on Track for Completion by Arch 50th Anniversary

Across the board, speakers affirmed that project timelines remain on schedule to celebrate the invigorated Arch experience by October 28, 2015, the 50th anniversary of the completion of the Arch. Tom Bradley, superintendent of the Jefferson National Expansion Memorial reported that work on the National Park Service Environmental Assessment for the design is complete and nearing final approval.

“We continue to fully support CityArchRiver 2015,” Bradley said. “The project’s inspirational design and innovative public-private partnership are breaking new ground that will be crucial to sustaining our national park system moving forward.”

Judith Rubin
Judith Rubin ([email protected]) is a leading journalist, publicist, strategist, blogger, content marketing specialist and connector in the international attractions industry. She excels at writing about all aspects of design and technical design, production and project management. Areas of special interest include AV integration and show control, lighting design and acoustics, specialty cinema, digital video and world’s fairs. Judith has ties to numerous industry organizations. From 2005-2020 she ran communications, publications and social media for the Themed Entertainment Association (TEA). In 2013, she was honored with the TEA Service Award. She was development director of IMERSA, and co-chair of the 2014 IMERSA Summit. She was publicist for the Large Format Cinema Association in the 1990s, now part of the Giant Screen Cinema Association (GSCA) and has also contributed to the publications of PLASA, IAAPA and the International Planetarium Society. Already making her mark as a magazine and book editor, Judith joined World’s Fair magazine in 1987, which introduced her to the attractions industry. Launching as a freelancer in the mid 1990s she has contributed to dozens of publications and media outlets including Funworld, Lighting&Sound America, Sound & Communications, Urban Land, The Raconteur and The Planetarian. She joined InPark in 2010. Judith earned a Bachelor of Fine Arts from Pratt Institute. She has lived in New York City and the San Francisco Bay Area, and now makes her home in Saint Louis, where she is active in the local arts and theater community.
Share
Facebook
Twitter
Linkedin
Email
Print
WhatsApp
Pinterest
ReddIt
Tumblr
Previous article
“David Bowie is” exhibition sells more than 40,000 advance tickets at London’s V&A
Next article
Brother Moon & Sister Sun’s TALL TALE: new ride to be designed by Gary Goddard for Lotte World