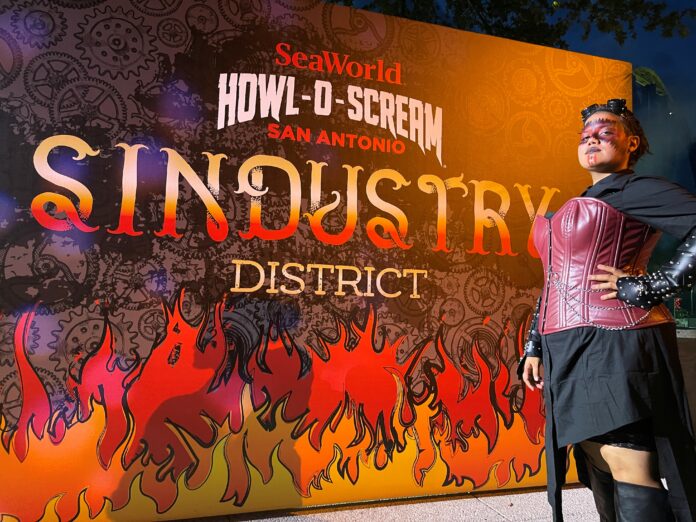 Announced on August 30, 2022 Howl-O-Scream at SeaWorld San Antonio is back, bigger and scarier than ever, with new haunts, scares, and party zones. For 22 nefarious nights the sun will set on the marine park and turn family daytime thrills into frightening nighttime chills.

More Menacing Moments – Park pathways metamorphose into eight terror-tories with a cast of crawling creatures. New for 2022 is GlaciAlly, where a chilled nightlife comes alive in Penguin Plaza, complete with an icy eerie vibe, amazing acrobatics feats, a DJ, and a new bar, appropriately named Frost Bite. Guests will feel the fear at the new The Water’s Edge, where the Sirens have awakened from the depths of the cursed chasm. The two new terror-tories join returning zones featuring zombies, vampires and other creatures of the night.

Howl-O-Scream also returns with celebrations including Monster Stomp with a live band, singers, and dancers. Guests can also experience a Coaster Creep, taking a thrilling ride in the dark on one of SeaWorld’s coasters alongside fiendish ghouls.

Not-So-Scary Halloween Fun – Guests can enjoy family fun during the day, included in the regular admission price. Those seeking milder Halloween hijinks can celebrate Spooktacular, SeaWorld’s kid-friendly event designed for the whole family. The not-too-spooky daytime fun includes a corn maze and in-park trick-or-treating. New for 2023, kids of all ages can meet and get their photo taken with Spookley the Square Pumpkin. Guests of all ages can also sing and dance along with their favorite furry friends on the route of the Sesame Street Halloween Parade. And available during both daytime and night hours, Día de los Muertos celebrates with sugar skull characters, traditional music, and an altar.

While parents enjoy the haunted thrills of Howl-O-Scream, youngsters are safe from the scares while playing games, crafting, and learning about animals at Spook Camp-ular! Parents can drop off their little ones with SeaWorld educational counselors and they will steer clear of the scarier zones of the park. The evening will be filled with crafts and visiting sharks, stingrays, colorful fish, and dolphins on a private tour. Campers will be provided dinner and a snack. Camp hours are from 7pm until park closing and is for children ages six to twelve.

Guests wanting to experience the Howl-O-Scream sights but not the scary startles can purchase a No Boo Necklace. These colorful light-up necklaces are Halloween themed and notify scare performers along pathways and terror-tories to steer clear and avoid startle scares.