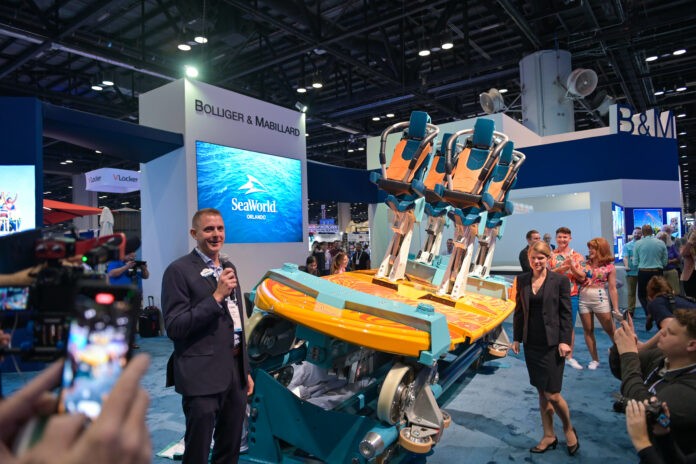 At the annual International Association of Amusement Parks and Attractions Expo (IAAPA) in Orlando, SeaWorld unveiled the ride vehicles for two of its exciting new coasters that will both be debuting in spring 2023: SeaWorld Orlando’s “Pipeline: The Surf Coaster” and “SeaWorld San Diego’s Artic Rescue.” Last month, these two new attractions were announced, and now the first look at its ride vehicles have officially been revealed.

Debuting in the spring of 2023, “Pipeline: The Surf Coaster” is the World’s first Surf Coaster and a first-of-its-kind attraction that can only be experienced at SeaWorld Orlando. The new attraction celebrates the iconic surfing cultures found around the world with a unique surfboard ride vehicle that will give riders an immersive experience when their seats rise and fall to mimic the sensation of riding on a wave. Guests will ride waves on an iconic, gnarly surfboard, and go on a journey of twists and turns, including a “wave curl” inversion which will simulate the feel of an “alley-oop” – a surfing maneuver that only the most experienced surfers in the world are able to perform. With a maximum speed of 60 MPH, “Pipeline: The Surf Coaster” is ideal for thrill enthusiasts everywhere.

This family-friendly, triple launch straddle coaster will debut at SeaWorld San Diego in spring 2023 as the longest and fastest straddle coaster on the West Coast. “Artic Rescue” takes passengers on a journey that starts at an indoor launch station inside the park’s Wild Artic exhibit and takes off outside on a unique snowmobile style vehicle. The coaster’s unique straddle snowmobile-style seats allow for an immersive ride experience for each rider as they lean into banks and turns and glide up heights as tall as 30 feet along the 2,800 feet of track. The ride reaches up to 40 MPH racing through the Arctic to help animals in danger while experiencing three exhilarating launches, each faster than the last. The new ride will bring awareness to the pressures the Arctic is facing and allow guests to visit, see and learn more about each animal whose species call the Arctic their home.

SeaWorld will also be introducing “Catapult Falls” in 2023, coming to SeaWorld San Antonio. “Catapult Falls” will feature the world’s steepest flume drop, North America’s only vertical lift flume coaster, and the tallest flume drop in Texas. This family friendly ride will catapult through the launch at speeds of 30 feet per second, allowing riders to feel the rush of a coaster while experiencing the rocking and swaying of riding on a track of water. Guests can stay tuned for a first look at Catapult Falls’ ride vehicles.

Visit SeaWorld.com to find more information on all new and current SeaWorld attractions