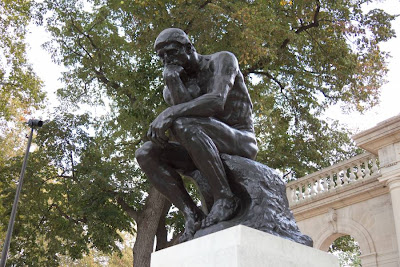 Philadelphia, PA, USA (November 26, 2012) — The Rodin Museum is one of Philadelphia’s prized museums, and has been run by the Philadelphia Museum of Art since 1929. The museum, which contains a priceless collection of ‘the father of modern sculpture’ Aguste Rodin including “The Thinker,” attracts tens of thousands of visitors per year and is not only a landmark in Philadelphia, but also a major international tourist attraction. Recently, the museum enhanced its visitor experience by installing a K-array audio system, distributed by Sennheiser.

Following a major restoration project to its garden and museum facility, The Rodin Museum reopened last September with the new K-array system, which was designed to facilitate background music as well as museum announcements and other public address functions.

Considering the visual and artistic context of the museum, the project team required an aesthetically subtle audio solution that would not divert or otherwise distract attention from the art itself. From a technical point of view, the audio system had to deliver high quality audio to accommodate the program requirements, while minimizing the amount of reverberation that is common in acoustic environments containing smooth walls and marble finishing.

The system was conceived by 3rd Street Services, in conjunction with Jim Fraatz and Steve Keever of the Philadelphia Museum of Art and installed over a three-month period. K-array distributor Sennheiser, along with local AV consultant 3rd Street Services, arranged for a demo of a K-array system — which was ultimately chosen for its outstanding sound quality and dispersion qualities, in addition to its minimalist, small-footprint design.

Four K-array KV50 line array speaker elements, each containing eight 1’’ neodymium transducers, were installed on the walls of the main gallery at about six feet high, accompanied by two K-array KU36 subwoofers on the ground – which were chosen for their compactness and portability.

A similar solution was implemented in the Library, which contains a nearly 30′ high vaulted ceiling. Eight K-array KT20CW point source compact speakers were recessed in the vault itself, accompanied by two KU36 subwoofers on the ground — which could be easily removed if required. The entire system was powered by four K-array KA7-7 amplifiers.

According to Ted Sheppard of 3rd Street Services, the KV50s were selected due to their transparent sound and extreme compactness; characteristics also shared with the KT20CWs. Despite their small footprint, the KT20CWs are capable of distributing audio content at 107 dBs at a frequency range of between 150 Hz and 18 KHz.

From the beginning, the installation performed as expected and only required an additional DSP preset, which was promptly loaded on the KA7-7 amplifiers. The new preset helped align the audio dispersion of the two KU36s, making the system more congruent and even more efficient.

For more information on the Rodin Museum, please visit http://www.rodinmuseum.org

Joe Kleimanhttp://wwww.themedreality.com
Raised in San Diego on theme parks, zoos, and IMAX films, Joe Kleiman would expand his childhood loves into two decades as a projectionist and theater director within the giant screen industry. In addition to his work in commercial and museum operations, Joe has volunteered his time to animal husbandry at leading facilities in California and Texas and has played a leading management role for a number of performing arts companies. Joe has been News Editor and contributing author to InPark Magazine since 2011. HIs writing has also appeared in Sound & Communications, LF Examiner, Jim Hill Media, and MiceChat. His blog, ThemedReality.com takes an unconventional look at the attractions industry. Follow on twitter @ThemesRenewed Joe lives in Sacramento, California with his fiancé, two dogs, and a ghost.
Share
Facebook
Twitter
Linkedin
Email
Print
WhatsApp
Pinterest
ReddIt
Tumblr
Previous articleThe Nutcracker with Sets Designed by Danish Queen Margrethe Performs Nightly at Tivoli
Next articleThinkwell Conceived "RED" Opens at Ferrari World Abu Dhabi