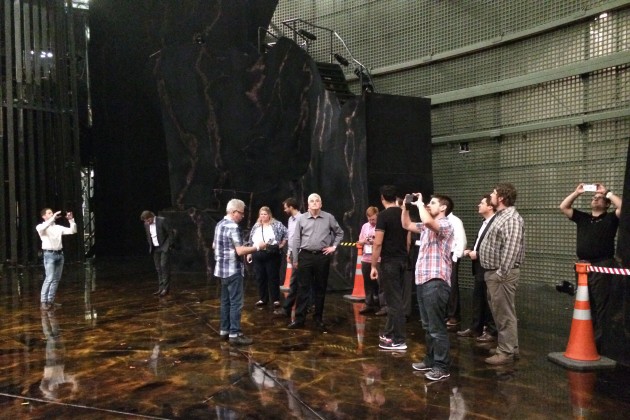 ABOVE: Guests of Sennheiser are taken on an ‘insider’s tour’ of the set for Cirque de Soleil’s La Nouba.

Orlando, FL, USA (June 25, 2015) – Audio specialist Sennheiser debuted its new MobileConnect streaming solution in the United States at a recent performance of Cirque de Soleil’s spectacle production La Nouba, held in Downtown Disney during InfoComm 2015. During the event, 50 top A/V consultants were hosted by Sennheiser for an exclusive social gathering, followed by a demonstration of MobileConnect in the ultimate performance environment: a Cirque de Soleil stage.

The event was held against the backdrop of a record-breaking InfoComm exhibition that ‘WOW’ed over 39,000 attendees and A/V decision makers, representing 108 different countries around the world.

La Nouba, which is performed ten times a week in a custom-built theater that seats 1,650 patrons, has been running since 1998. During the performance on April 17th, which coincided with InfoComm 2015, Sennheiser guests were invited to experience its new MobileConnect streaming solution first-hand. MobileConnect is an innovative technology designed to provide unprecedented capabilities and features to the hearing and visually impaired.

“When we approached Cirque de Soleil with our MobileConnect solution, they liked the concept of having their patrons utilizing their own devices and headphones,” commented Frederick Girard, Sales Director, System Integration, Sennheiser. “Even though they have assistive listening devices on site, our solution reduces the logistical challenges of picking up and dropping off these devices, while ensuring a positive theatrical experience for the hearing and visually impaired.”

Sennheiser guests were treated to dinner at House of Blues before being provided with a pair of headphones and instructions on how to download and use the MobileConnect: which took all of 2 minutes. “MobileConnect requires next to no training to use — it is a very simple solution that is easy to operate and understand,” Girard explains.

Among the A/V consultants on hand were Sergio Molho, Partner and Director of International Relations for Highland, NY-based Walters-Storyk Design Group — a leading acoustic firm and audiovisual integrator: “With its new MobileConnect technology, Sennheiser is helping theatrical productions, live sporting events, church services and other kinds of activities become more meaningful for people with disabilities,” Molho said. “Our firm, WSDG, routinely handles installations at major sports facilities and theaters around the world — MobileConnect is a solution whose time has come, and we will be exploring possibilities to integrate this on our future projects.”

“I was personally very excited to look around and see our customers engaging the MobileConnect system,” concluded Girard. “The low latency of the system, ease of use and flexible feature set worked flawlessly as expected. Moreover, it seemed very natural for audience members to be using such a system — it was a genuine live test of the technology and everything seemed to fit.”

Joe Kleimanhttp://wwww.themedreality.com
Raised in San Diego on theme parks, zoos, and IMAX films, Joe Kleiman would expand his childhood loves into two decades as a projectionist and theater director within the giant screen industry. In addition to his work in commercial and museum operations, Joe has volunteered his time to animal husbandry at leading facilities in California and Texas and has played a leading management role for a number of performing arts companies. Joe has been News Editor and contributing author to InPark Magazine since 2011. HIs writing has also appeared in Sound & Communications, LF Examiner, Jim Hill Media, and MiceChat. His blog, ThemedReality.com takes an unconventional look at the attractions industry. Follow on twitter @ThemesRenewed Joe lives in Sacramento, California with his fiancé, two dogs, and a ghost.
Share
Facebook
Twitter
Linkedin
Email
Print
WhatsApp
Pinterest
ReddIt
Tumblr
Previous articleLEGOLAND Florida Opens Heartlake City Themed Area
Next articleWalt Disney World Announces Closing Dates for Magic of Disney Animation and DisneyQuest