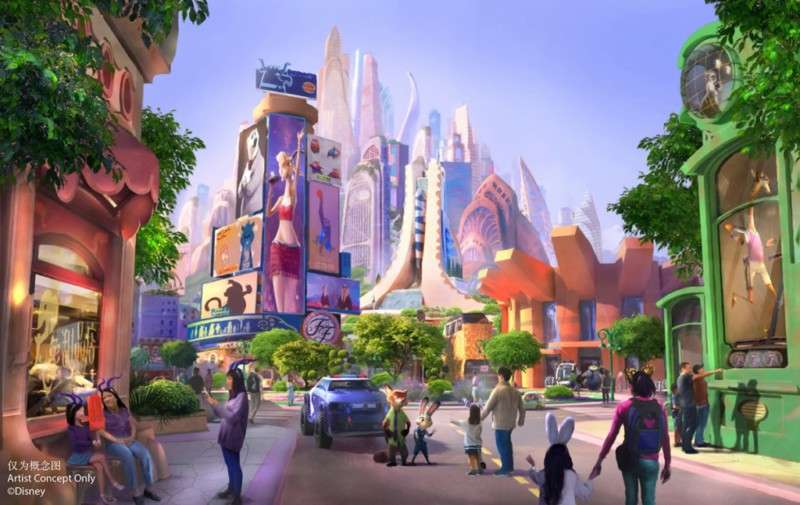 Shanghai Disney Resort today announced a new expansion of its theme park – Shanghai Disneyland, bringing the characters and stories from one of The Walt Disney Company’s newest and most popular animated films, Zootopia, to life. The announcement marks the second major expansion of Shanghai Disneyland, which has welcomed millions of guests since its highly successful opening in June 2016. When it opens, Zootopia will become the eighth themed land at the world’s newest Disney park, and the first-ever Zootopia-themed land at any Disney park worldwide. The expansion announcement comes less than three years after the Grand Opening of the resort, and less than one year after the opening of its first major expansion – Disney·Pixar Toy Story Land, in a sign of the resort’s early success and the confidence in the growing consumer demand for themed entertainment in China.

“We are thrilled to announce that Shanghai Disneyland will be home to the world’s first Zootopia-themed land,” said Bob Chapek, Chairman of Parks, Experiences and Consumer Products, The Walt Disney Company. “The rapid rate of expansion at Shanghai Disney Resort demonstrates our confidence and commitment to the company’s future development in China.”

As the first-ever themed land of its kind, Zootopia will be unique to Shanghai Disneyland and will feature a new major attraction that seamlessly blends Disney’s storytelling and state-of-the-art technologies in order to bring this fan favorite movie and its characters to life. The new themed land will also invite guests to fully immerse themselves in the mammalian metropolis of Zootopia, “where anyone can be anything,” and come along on an adventure with Judy and Nick, the lead characters from the hit, Academy Award®-winning animated movie. With a brand-new attraction, entertainment, merchandise, and food and beverage offerings, the new land will provide guests with even more to experience and enjoy at Shanghai Disneyland than ever before.

“Since the resort’s Grand Opening in 2016, Shanghai Disneyland has gone from strength to strength – continuing to expand and enjoying ever-rising attendance rates while also providing a safe and enjoyable experience for our guests,” said Yang Jinsong, Chairman of Disney’s Chinese joint venture partner for Shanghai Disney Resort – Shanghai Shendi Group. “Shanghai Disneyland has rapidly become one of the fastest growing Disney parks and has been key to the development of the Shanghai International Resort as one of the most visited leisure destinations in the country. This new expansion will provide our guests with an even richer selection of offerings, and will further boost our market competitiveness.”

The development of the world’s first Zootopia-themed land follows on from the huge success of the Zootopia animated movie across the world, and particularly in China, where it broke box office records to become the country’s No. 1 all-time highest-grossing animated feature film. Characters and stories from the film have strongly resonated with Chinese guests, which has led to the successful performance of Zootopia-themed merchandise, digital interactive games, and more, throughout the Chinese market. Judy and Nick can currently be found greeting guests at Disney parks worldwide, and will soon be joined by other Zootopia friends at their very own land at Shanghai Disney Resort.

With the construction of Zootopia targeted to begin later this year, the new land will continue to be a key driver of multiple local industries across the construction, design and tourism sectors, and will help to create even more direct and indirect job opportunities in the local community, adding to the over 12,000 Cast Members already employed by the resort.

Since opening on June 16, 2016, Shanghai Disney Resort has continuously worked to provide new experiences for its guests in China. The resort has introduced a series of new products and services designed specifically for the local market, leveraging leading technology to help make guests’ dreams come true. On April 26, 2018, the resort’s first major expansion and its theme park’s seventh themed land, Disney·Pixar Toy Story Land was opened, making Shanghai Disney Resort the fastest expanding Disney resort ever. On June 14, 2018, the Mandarin production of the Beauty and the Beast Broadway musical premiered at Shanghai Disney Resort’s Walt Disney Grand Theatre, following on from the successful performance of the Mandarin production of THE LION KING – one of the longest-running Broadway musicals in China. As the resort continues to create new and exciting experiences, the opening of Zootopia will provide even more reasons for guests to visit Shanghai Disney Resort time and time again.

Joe Kleimanhttp://wwww.themedreality.com
Raised in San Diego on theme parks, zoos, and IMAX films, InPark's Senior Correspondent Joe Kleiman would expand his childhood loves into two decades as a projectionist and theater director within the giant screen industry. In addition to his work in commercial and museum operations, Joe has volunteered his time to animal husbandry at leading facilities in California and Texas and has played a leading management role for a number of performing arts companies. Joe previously served as News Editor and has remained a contributing author to InPark Magazine since 2011. HIs writing has also appeared in Sound & Communications, LF Examiner, Jim Hill Media, The Planetarian, Behind the Thrills, and MiceChat His blog, ThemedReality.com takes an unconventional look at the attractions industry. Follow on twitter @ThemesRenewed Joe lives in Sacramento, California with his wife, dog, and a ghost.
Share
Facebook
Twitter
Linkedin
Email
Print
WhatsApp
Pinterest
ReddIt
Tumblr
Previous article
Newest hotel at LEGOLAND Florida Resort to have pirate theme
Next article
Media matters