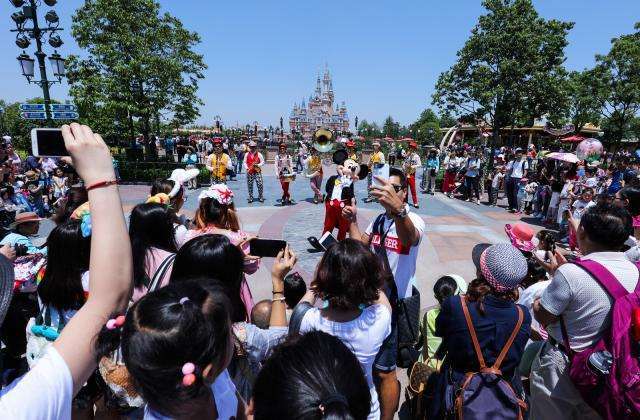 At the Shanghai Disney Resort, opening in late 2015, The Enchanted Storybook Castle, where all the Disney Princesses will reside, will also house makeover boutiques for children, retail and dining locations, and a boat ride traveling beneath the castle. This is the only attraction that has been officially announced (in April 2012), although there has been much speculation about the other components of the highly anticipated park.
The following is also known:

• 7.3 million visitors are expected in the first year.

• The Resort has begun the hiring process for lead technical and creative positions.

• The entrance to the park will be on the shores of a large artificial lake, much like Walt Disney World’s Magic Kingdom.

• There will be an 11 acre (46,000 m2) green space at the center of the theme park that will both celebrate nature and be the home of cultural festivals and activities.

• Technology seen at other Disney parks, resorts, and ships, such as RF tags, biometric scanners, virtual and augmented reality, interactive queues and games, and “living” characters will be integrated into the resort as part of the initial infrastructure.

• The Walt Disney Company’s partner on the project is Shanghai Shendi Group, a 100% state owned entity which owns 53% of Shanghai Disney Resort and 30% of the management company. On April 10, 2012, Shanghai Shendi took out a US $2 billion bank loan for the property after failing to secure the US $3.3 billion slated for the project’s first phase.

• According to Tom Staggs, Chairman of Disney Parks and Resorts, “…our new resort in Shanghai will include things that you know and love about a Disney theme park such as Disney characters, attractions and storytelling… but it will also feature all-new experiences and stories that were inspired by and created for the people of China. The best way to describe this new resort is authentically Disney, yet distinctly Chinese.”

The Walt Disney Company is comprised of five segments – media networks, parks and resorts, the studios, interactive media, and consumer products. Each division is designed to work synergistically with the others. The Shanghai resort is a key player in Disney’s cross-segment strategy in China, where socio-economic conditions and a large market in counterfeit goods have led to some misunderstanding of Disney franchises and characters.

An intriguing aspect of Disney’s marketing strategy in China that goes straight to the target market is English language education. In 2008, Disney Consumer Products established the first Disney English school in Shanghai. Now with 35 locations in nine metropolitan areas, Disney Learning has a simple mission: teach English to Chinese schoolchildren. Teach it with Disney characters.

On March 12, 2012, Disney English announced the “Disney English Learn and Read App” for the iPad. As stated in their publicity material, this “represents a new innovation in education and a whole new way to learn English by gradually transforming from a story in Chinese to a story you can understand in English.” •••

Joe Kleimanhttp://wwww.themedreality.com
Raised in San Diego on theme parks, zoos, and IMAX films, InPark's Senior Correspondent Joe Kleiman would expand his childhood loves into two decades as a projectionist and theater director within the giant screen industry. In addition to his work in commercial and museum operations, Joe has volunteered his time to animal husbandry at leading facilities in California and Texas and has played a leading management role for a number of performing arts companies. Joe previously served as News Editor and has remained a contributing author to InPark Magazine since 2011. HIs writing has also appeared in Sound & Communications, LF Examiner, Jim Hill Media, The Planetarian, Behind the Thrills, and MiceChat His blog, ThemedReality.com takes an unconventional look at the attractions industry. Follow on twitter @ThemesRenewed Joe lives in Sacramento, California with his wife, dog, and a ghost.
Share
Facebook
Twitter
Linkedin
Email
Print
WhatsApp
Pinterest
ReddIt
Tumblr
Previous articleFred Foster, co-founder and CEO of ETC, passes away at age 61 – remembered as leader in theater technology
Next articleJosh Powers joins IAAPA as Executive Vice President and Chief Financial Officer