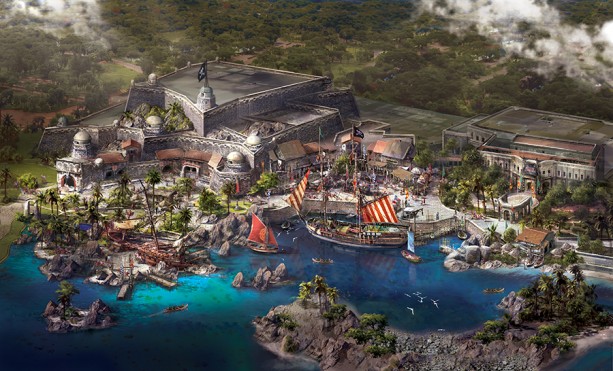 [quote]With a combination of new cutting-edge technology and innovation, Pirates of the Caribbean: Battle of the Sunken Treasure will take our Guests at Shanghai Disney Resort on a first-of-its-kind pirate adventure you will never experience anywhere else in the world.” — Mike Crawford, General Manager, Shanghai Disney Resort[/quote]

Shanghai, China (March 19, 2014)– Shanghai Disney Resort today announced that the first of its Magic-Kingdom theme park’s six themed lands will be dedicated to characters and stories inspired by the blockbuster movie franchise, Pirates of the Caribbean. This first-ever Pirates-themed land in a Disney park, to be named Treasure Cove, will be unique to Shanghai Disneyland and include a major attraction, Pirates of the Caribbean: Battle of the Sunken Treasure, an all-new high-technology boat ride attraction. Today’s announcement coincides with the completion of key structural work on the Pirates attraction, and marks another exciting milestone in the resort development.

Seamlessly blending Disney’s storytelling and state-of-the-art technologies, Pirates of the Caribbean: Battle of the Sunken Treasure will be the first attraction built since the release of the Pirates films, and the first to heavily feature the characters and scenes derived directly from the movies. Employing many never-before-seen effects and technologies, Guests will be enlisted to go with Captain Jack Sparrow on an epic journey to find Captain Davy Jones’ treasure. The ride will take Guests down to the ocean depths, through the bellies of pirate ships, and straight into the heart of a ferocious naval battle, all the while braving the nautical twists, spins and turns of a pirate adventure.

“We are excited to celebrate this new milestone in Shanghai Disney Resort’s development,” said Bill Ernest, President and Managing Director, Asia, Walt Disney Parks and Resorts. “And we’re thrilled to announce that the resort’s theme park will be home to a first new themed land and attraction, inspired by the phenomenal Pirates of the Caribbean movies that were originally inspired by a Disney attraction. It is truly unique to Shanghai Disney Resort!”

“We are excited to see the Disney Imagineering team continue to bring the most advanced technologies and construction techniques to China, working collaboratively with local talents, in building this modern and innovative park,” said Fan Xiping, Chairman of Disney’s Chinese joint venture partner in Shanghai Disney Resort, Shanghai Shendi Group.

“We are committed to creating experiences which honor both Disney heritage and appeal to our Chinese Guests,” said Mike Crawford, General Manager of Shanghai Disney Resort.

Progress continues with construction at the Shanghai Disney Resort’s build site in Pudong Shanghai and the resort remains on target to open at the end of 2015.

Joe Kleimanhttp://wwww.themedreality.com
Raised in San Diego on theme parks, zoos, and IMAX films, InPark's Senior Correspondent Joe Kleiman would expand his childhood loves into two decades as a projectionist and theater director within the giant screen industry. In addition to his work in commercial and museum operations, Joe has volunteered his time to animal husbandry at leading facilities in California and Texas and has played a leading management role for a number of performing arts companies. Joe previously served as News Editor and has remained a contributing author to InPark Magazine since 2011. HIs writing has also appeared in Sound & Communications, LF Examiner, Jim Hill Media, The Planetarian, Behind the Thrills, and MiceChat His blog, ThemedReality.com takes an unconventional look at the attractions industry. Follow on twitter @ThemesRenewed Joe lives in Sacramento, California with his wife, dog, and a ghost.
Share
Facebook
Twitter
Linkedin
Email
Print
WhatsApp
Pinterest
ReddIt
Tumblr
Previous articleaccesso Division Siriusware Announces Five New Attractions Contracts
Next articleElectrosonic Brings Stonehenge Into the Modern Age