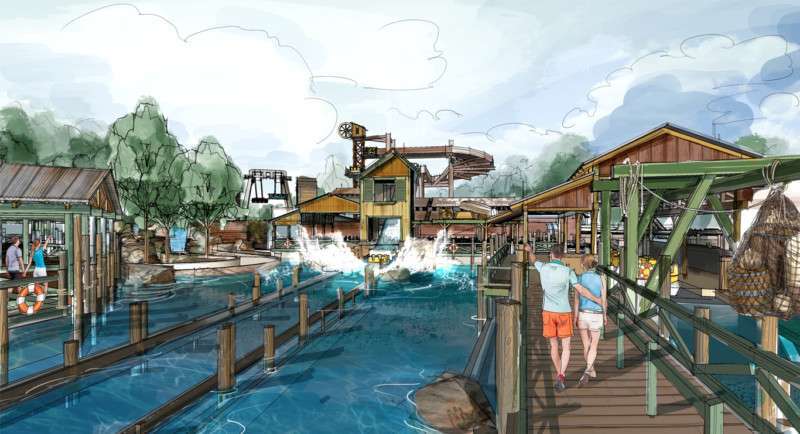 Silver Dollar City is celebrating the park’s 60th Anniversary Diamond Jubilee of 2020 by investing $30 million into new park offerings.  This represents the largest investment, made during a one-year time frame, in the 60-year history of Silver Dollar City.

As part of a series of upcoming attractions, the largest of the announcements will open next summer with the debut of Mystic River Falls. The new water raft ride will feature the “Tallest Drop in the Western Hemisphere.”  This addition will take themed water experiences to the next level, setting an ever-higher standard for guest expectations.  Additional 2020 announcements include a highly-themed area and dining experience, bringing the total investment to more than $27 million.

Still to be revealed during 2019, Silver Dollar City will soon open its doors, day and night, to a glowing Fall Harvest Festival that showcases Pumpkin Nights, an all new concept at Silver Dollar City.  Between live and specially-carved, there will be more than 8,000 pumpkins.   Most prominent will be the illuminated pumpkins and custom-designed carved pumpkin icons that reach from the ground to as high as 4 stories, such as a massive cat, spider, owls and others.  A nighttime black light dance party, along with rides and attractions, will keep the park glowing into extended hours of 9pm/10pm on weekends.  During the day, the park is adding a new acrobatic adventure of a lumberjack production show from Canada, Cirque Eloize, plus dozens of new offerings to the City crafters, including a new Makers’ Market. Food at the park also adopts a fall look and palette with pumpkin-flavored churros and ice cream, glow-in-the-dark beverages and classic fall favorites like caramel apples and cider.  (Investment of $2 million)

An Old Time Christmas, already heralded as one of the biggest holiday celebrations in the country, brings more to its entertainment menu with the addition of a custom-engineered & designed 8-story, lighted, special effects Christmas tree.  The tree combines color, music and animated imagery to create an immersive experience “Joy on Town Square.”  (Investment of $1.5 million)

Mystic River Falls, itself a $23 million investment, will be a River Adventure that is themed to the history and legend of the great Marvel Cave, which was the catalyst for Silver Dollar City six decades ago.  Riders will splash through a nearly half-mile (2100’) scenic journey, navigating hairpin turns, high tides and a hidden mine shaft on more than a 5-minute trek.  Plus, Adventurers will discover industry-leading special features:

82’ Tall Lift Tower: River Adventurers will ascend a more than 8-story lift tower, exposed to the open air as their rafts rotate during the climb. The rotation elevator lift of 4 platforms is unique to this ride and will be the only one like it in the world to go up so high.

More than 6-Story Elevated River Channel, 180’ Long: The rafts will connect to an elevated river channel suspended in the air 66’ high and travel within the channel for 180 linear feet.

A Grand Finale 4.5 Story Waterfall:Racing down and through the ride’s queue building, River Adventurers will brave the Mystic River Falls finale on the tallest raft ride drop in the Western Hemisphere, resulting in the wettest splashdown in the park’s 60-year history.

Mystic River Falls will be the highlight of a new themed area of the park, Rivertown, where 1880s townfolk are caught up in a high-spirited celebration, representing Silver Dollar City’s Diamond Jubilee.  The all-new Rivertown Smokehouse, the largest dining investment in the corporation’s history, will serve the park’s famous BBQ plus new favorites, providing 450 viewing seats along the banks of the Mystic River.  (Investment $4 million)

Marvel Cave in Branson was among the most popular “show caves” in the 1950s and 60s. In fact, the Herschends started Silver Dollar City so tourists to Marvel Cave had something to do while waiting for their tours.

Mystic River Falls calls upon that rich history for theming and backstory, intermingling fact and fiction, legend and lore, to arrive at an attraction that celebrates the spirit of adventure that’s part of Ozark culture. An underground body of water that seems to come from and go nowhere, Mystic River truly appears on the park’s historical maps as discovered and documented by botanist S. Fred Prince in the late 1800s, and to this day, flows in Marvel Cave. For the new ride, guests will be transported back to the 1880s in a storyline that revolves around a historically-based fictional character named Pearl Brazen, an intrepid explorer who’s eager to take them on a bold quest to find the headwaters of the Mystic River.

Silver Dollar City’s 60th Anniversary Diamond Jubilee will begin in March, 2020 along with the park’s opening; an Anniversary Celebration will launch the weekend of May 1, 2020, followed by Mystic River Falls opening during the summer season.

As is tradition, cave tours are offered daily, so in 2020 park guests can step into the past by exploring the cave, and then look toward the future by experiencing a record-breaking, game-changing water ride that reminds us all that “The Greatest Adventures Lie Ahead!”

The Tallest Raft Ride Drop in The Western Hemisphere: 45’ (4.5 Stories)

4-Platform Elevator Lift Tower: 82’ tall, the rotating elevator with 4 platforms is the only one like it in the world and will allow for scenic views, increase ride capacity and lessen ride wait-time.

Joe Kleimanhttp://wwww.themedreality.com
Raised in San Diego on theme parks, zoos, and IMAX films, InPark's Senior Correspondent Joe Kleiman would expand his childhood loves into two decades as a projectionist and theater director within the giant screen industry. In addition to his work in commercial and museum operations, Joe has volunteered his time to animal husbandry at leading facilities in California and Texas and has played a leading management role for a number of performing arts companies. Joe previously served as News Editor and has remained a contributing author to InPark Magazine since 2011. HIs writing has also appeared in Sound & Communications, LF Examiner, Jim Hill Media, The Planetarian, Behind the Thrills, and MiceChat His blog, ThemedReality.com takes an unconventional look at the attractions industry. Follow on twitter @ThemesRenewed Joe lives in Sacramento, California with his wife, dog, and a ghost.
Share
Facebook
Twitter
Linkedin
Email
Print
WhatsApp
Pinterest
ReddIt
Tumblr
Previous articleDenver Museum of Nature & Science Guests take to the skies with Birdly VR
Next articleSandcastle adding Bombs Away looping free-fall body slide in 2020