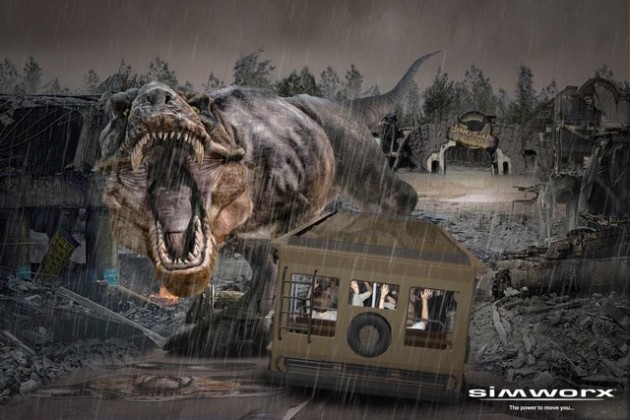 Kingswinford, UK (July 20, 2015) — Simworx, one of the world’s leading suppliers of turnkey advanced media-based theme park attractions, has completed the acquisition of RoboCoaster, the game-changing innovator behind some of the world’s most successful theme park rides.

Simworx has worked with RoboCoaster during the course of the last 2 years under a highly successful Teaming Agreement and this new development was seen as a natural progression for the two companies.

Founded by Terry Monkton and Andrew Roberts, Simworx has built up an impressive product portfolio of media based attractions that includes 4D Effects Cinemas, the Stargazer and Cobra dynamic motion simulation rides, the Immersive Tunnel and more recently in a collaboration with Dutch based Mondial, one of the leading amusement ride manufacturers , the 360° Flying Theatre.

Simworx created the Angry Birds 4D cinema at Thorpe Park for Merlin Entertainments and has again been chosen by Merlin to develop and deliver one of the key elements of the new Shrek’s Adventure attraction, which opened in London in July. The ride is based on Simworx’s proprietary Immersive Tunnel, where guests board a London Bus-themed motion simulator and are surrounded by a 360 degree, 3D cinema screen and immersed in lighting, sound, smells and weather effects.

Simworx’s first Immersive Tunnel ride, The Lost Temple, was delivered to Movie Park Germany in May 2014. Since then the business has secured further Immersive Tunnel orders and has been in talks with theme parks in the UK, US, Asia and the Middle East, where there is a trend towards media-based attractions that are cost effective, flexible and offer visitors an indoor option.

Warwickshire based RoboCoaster is led by Gino De-Gol, an internationally recognized developer of Intellectual Property for use in passenger carrying robotic technology and trackless dark rides. The acquisition will combine RoboCoaster’s pioneering robotics capability with Simworx’s Motion Simulation and Audio Visual experience. The two businesses will now concentrate on the development and manufacture of a new generation of ride technologies and robot based show solutions to add to the existing RoboCoaster RCX Robotic attractions and AGV Dark Rides that the two companies currently offer. Gino will remain as a director of the business and play a major role in the combined companies going forward.

In funding the acquisition, Simworx approached BGF (Business Growth Fund), the UK’s most active provider of growth capital to mid-sized businesses. BGF provides long-term equity investment for companies with strong growth potential. It is an independent company with capital of up to £2.5 billion and is backed by five of the UK’s main banking groups – Barclays, HSBC, Lloyds, RBS and Standard Chartered. BGF is managed autonomously with an independent management team (www.bgf.co.uk).

In addition to the acquisition of RoboCoaster, Simworx will also use the funding to double the size of its production plant in Kingswinford and increase its demonstration facilities. The business will also add to its existing 30 employees by recruiting a further 20 new members of staff in the next 12 months, including designers, engineers and administrative staff.

To further enhance the management team, Mike Lloyd will also join as non-executive chairman following an introduction made by BGF. Mike has more than forty years’ experience in engineering, manufacturing and supply chain roles in the electrical machinery and power sectors. His senior leadership roles have included group manufacturing director and president of Rolls Royce Gas Turbines Operations and technical director of GEC Large Machines.

Simworx designs, assembles and delivers all of its turn-key solutions, with 75 percent of its suppliers for component parts located within 25 miles of the company’s headquarters. RoboCoaster will continue to licence existing technologies as well as develop further intellectual property and will begin manufacturing at its new facility in the West Midlands, using the best of British engineering and production capability.

Terry Monkton, Managing Director, Simworx said: “I am delighted to formalise our working relationship with RoboCoaster. As well as having access to some amazing technology, they have been an absolute pleasure to work with over the last 24 months. I am also pleased to be working with BGF as our investment partners. After speaking to BGF for the past 15 months, they also share our enthusiasm in the continued development of new technology and a desire for such technology to be manufactured here in Great Britain. Demand for media based attractions that offer visitors a new type of experience and can also provide entertainment regardless of weather conditions is growing exponentially – and we are well placed to meet that demand.

“We will continue to focus on delivering technical excellence and this funding allows us to be even more adventurous and innovative with our research and design, with several new products in development. This, combined with Mike Lloyd’s experience and expertise in supply chain management, puts us in a strong position to work on projects with the most exciting attraction venues globally.”

Gino De-Gol, managing director of RoboCoaster commented “The RoboCoaster mission has always been to pioneer new technologies in the field of entertainment and we have now amassed a significant bank of IP and know how for new applications. Additionally, the recent impact of the successful Simworx collaboration on our business cannot be overstated. I am absolutely thrilled at the prospect of this new venture and very much look forward to bringing all of our next generation technologies to market.”

Gurinder Sunner, BGF said: “Simworx and RoboCoaster are fantastic examples of the diversity of businesses in the Midlands. The fact that 75 percent of their suppliers are neighbouring businesses is even more exciting and is testament to the collective power of British business. Both companies have become internationally recognised and respected brands within their space. Suffice to say, this has been one of BGF’s most exhilarating investments to date.”

Joe Kleimanhttp://wwww.themedreality.com
Raised in San Diego on theme parks, zoos, and IMAX films, InPark's Senior Correspondent Joe Kleiman would expand his childhood loves into two decades as a projectionist and theater director within the giant screen industry. In addition to his work in commercial and museum operations, Joe has volunteered his time to animal husbandry at leading facilities in California and Texas and has played a leading management role for a number of performing arts companies. Joe previously served as News Editor and has remained a contributing author to InPark Magazine since 2011. HIs writing has also appeared in Sound & Communications, LF Examiner, Jim Hill Media, The Planetarian, Behind the Thrills, and MiceChat His blog, ThemedReality.com takes an unconventional look at the attractions industry. Follow on twitter @ThemesRenewed Joe lives in Sacramento, California with his wife, dog, and a ghost.
Share
Facebook
Twitter
Linkedin
Email
Print
WhatsApp
Pinterest
ReddIt
Tumblr
Previous article
Kentucky Kingdom Announces New Coaster From Rocky Mountain Construction
Next article
Matthew Burstein Joins Available Light