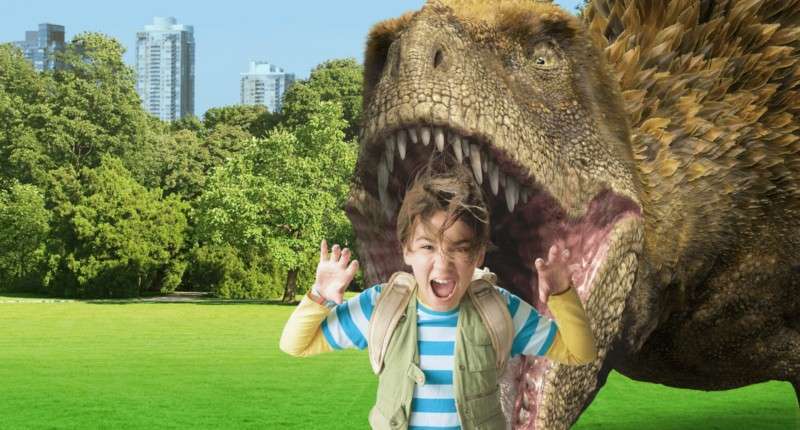 Giant screen veteran Jennifer Lee Hackett has joined Sinking Ship Entertainment, a Toronto-based producer of children’s television and film programming, where she will oversee sales to the museum, science center, and attraction markets, beginning with a film version of the hit television show “Dino Dana.” Hackett has over 15 years’ experience in the industry, most recently as Director of Sales for nWave Pictures. Prior to that, she served as Director of Sales and Distribution for National Geographic Cinema Ventures and as the Senior Group Sales and Marketing Manager for Smithsonian Enterprises.

Tell us about Sinking Ship Entertainment and what attracted you to the company.

Sinking Ship is a multi-award winning production and distribution company. Most of our work is live- action/CGI blended series and feature films, though we have just recently expanded with the addition of an Animation Series division. Sinking Ship is a progressive company and strives to think outside the box. They are advocates for children and they are forward thinkers, which was why joining the team was a great opportunity and a really great fit for me. The thoughts and visions I have about making education an entertaining experience are matched by what the company is doing; I earned my Masters in elementary education, and as a bonus tie-in, my five-year-old daughter loves their TV show “Dino Dana.”

You’ve been involved in museum and institutional film exhibition for quite some time. What changes have you seen during your career and in what direction do you see the industry headed?

First of all, there’s been a change from film to digital. Along with that, there was a move from institutions to standalone theaters – like the one I opened at Jordan’s Furniture in Massachusetts in 2002. Now, giant screens are everywhere, and the major competition now is with handheld devices and streaming. Where’s the industry heading? I asked myself that same question, and then added “What would make me drive 45 minutes to see a film?” My answer was “It needs to come with an experience.” As a parent, I feel the need to be able to bring home an extension of the experience; what did we learn? how do we apply that here? what was the purpose? I want to further engage my children, and our hope at Sinking Ship is that “Dino Dana: The Movie” will do just that for other families.. More than just the film, we need to create an experience beyond the time spent in the theater.

In keeping with what you just said, Sinking Ship is offering companion AR and VR programs to “Dino Dana.” Are there plans to implement this type of cross-platform strategy with other productions going forward?

The infrastructure is already in place at Sinking Ship for AR and VR production. Apps are available in online stores and headsets can easily download the information needed for the experience. In AR, one of the things we’ve created is an Interactive dinosaur excavation that can be played in the museum or at home. With VR, there are different levels of programming, depending on budget and need. Some of our AR and VR is designed for guests to bring the experience home, while some can be used as static displays in museums – it’s all somewhat customizable, with some flexibility based on needs. Instead of the traditional educator’s guides that accompany giant screen films, we have a family guide designed by education professionals, which serves both educators and parents. The guide is easily accessible as a download. With the guide, we walk families and classes through the scientific model. A lot of museums and science centers want tangible collateral, so we offer tactile activities in the guide. There’s also a companion book – a field guide about dinosaurs. It has references to the size of dinosaurs, other fun facts, and lots of colors. With our AR and VR programs and family guide, we blend the line between education and entertainment.

Are there any underserved or emerging markets that you’ll be pursuing? Will Sinking Ship’s productions be made available for digital planetariums and other fulldome theaters?

The markets are all open. Because our mission is educating and entertaining children, we want our products to be very accessible. That means everything from the giant screen down to portable screens. We’ve placed our guides on our website to make them readily available and we’ve worked hard to make them as Inclusive as possible. Because we’re serving kids of all kinds, we’re sensory friendly. For younger children, who are still developing, we have a 2D version and we’re developing shorter versions of the films. We’re looking at the “Dino Dana” sequel for the digital dome, shooting with the dome in mind to make sure the image looks right. We have a lot of IPs. “Annedroids” (a STEM-themed IP told through the lens of an 11-year old girl) might be next – it’s a natural fit. We have a tight pipeline, but we’ll see what the next one to go forward with will be. If our model proves successful, which we believe it will, there’ll be a lot more Sinking Ship productions put in the museum pipeline.

Joe Kleimanhttp://wwww.themedreality.com
Raised in San Diego on theme parks, zoos, and IMAX films, InPark's Senior Correspondent Joe Kleiman would expand his childhood loves into two decades as a projectionist and theater director within the giant screen industry. In addition to his work in commercial and museum operations, Joe has volunteered his time to animal husbandry at leading facilities in California and Texas and has played a leading management role for a number of performing arts companies. Joe previously served as News Editor and has remained a contributing author to InPark Magazine since 2011. HIs writing has also appeared in Sound & Communications, LF Examiner, Jim Hill Media, The Planetarian, Behind the Thrills, and MiceChat His blog, ThemedReality.com takes an unconventional look at the attractions industry. Follow on twitter @ThemesRenewed Joe lives in Sacramento, California with his wife, dog, and a ghost.
Share
Facebook
Twitter
Linkedin
Email
Print
WhatsApp
Pinterest
ReddIt
Tumblr
Previous articleNational Museum of African American History and Culture Announces Early Childhood Education Initiative To Develop Healthy Racial Identity
Next articleLarge format 3D printing open house set for August 22nd