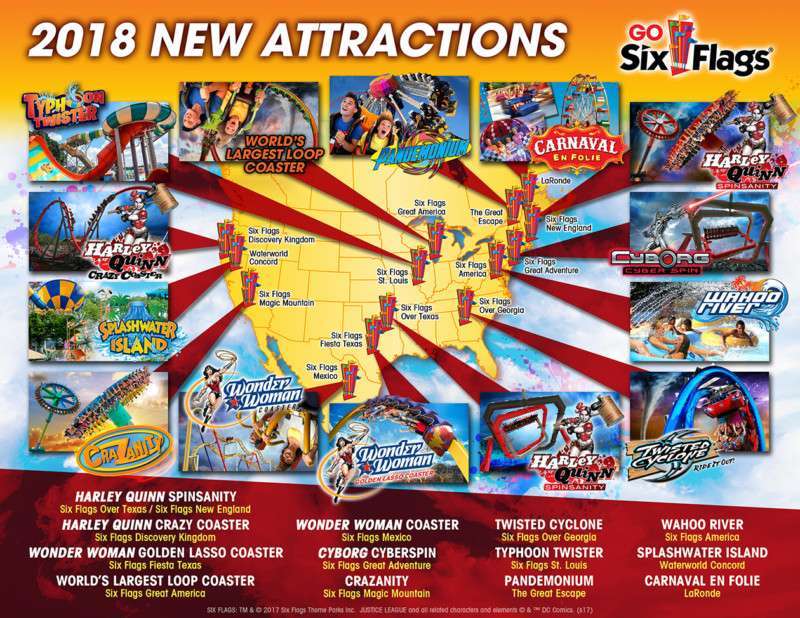 Six Flags today announced one of the biggest lineups of world new attractions in its 56-year history, debuting at Six Flags parks from coast to coast for the 2018 season. “This is our most impressive and ambitious new capital rollout ever. Many of the rides and attractions we are introducing next year are ‘world’s firsts’ and record breakers as we deliver fun-packed innovation at the highest level. Innovation is in our DNA and our guests expect and deserve one-of-a-kind experiences when they visit our parks,” said Six Flags Chairman, President and CEO Jim Reid-Anderson. “Our strategy of providing something new in every park, every year, continues to delight our guests and has resulted in attendance growing to over 30 million guests annually and record revenue and EBITDA in each of the last seven years.”

Six Flags, in partnership with Warner Bros. Consumer Products, on behalf of DC Entertainment, is launching a collection of new rides and attractions themed after some of the most famous Super Heroes and Super-Villains in the world. 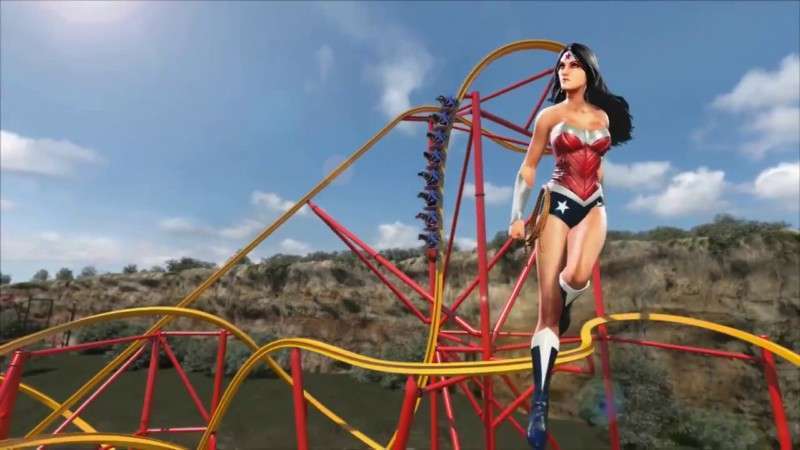 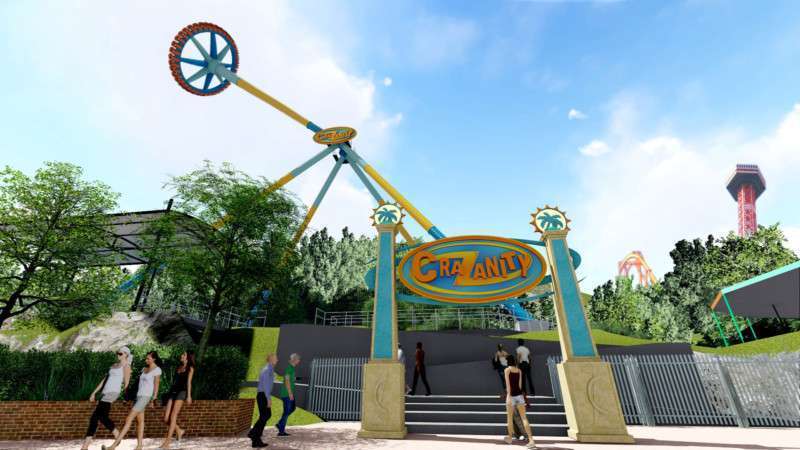 At Six Flags Magic Mountain, prepare for CraZanity— the world’s tallest pendulum ride. At a record-breaking 17 stories in the air, this impressive giant disc will reach speeds of up to 75-miles-per-hour as it whips back and forth, higher and higher. As the pendulum swings from side to side, while rotating counterclockwise, guests will experience a feeling of weightlessness at 172 feet in the air. CraZanity will be the centerpiece of a newly-themed Boardwalk. The Los Angeles-based theme park recently announced it is entering the destination travel market by launching a 365-day operating calendar beginning January 1, 2018. 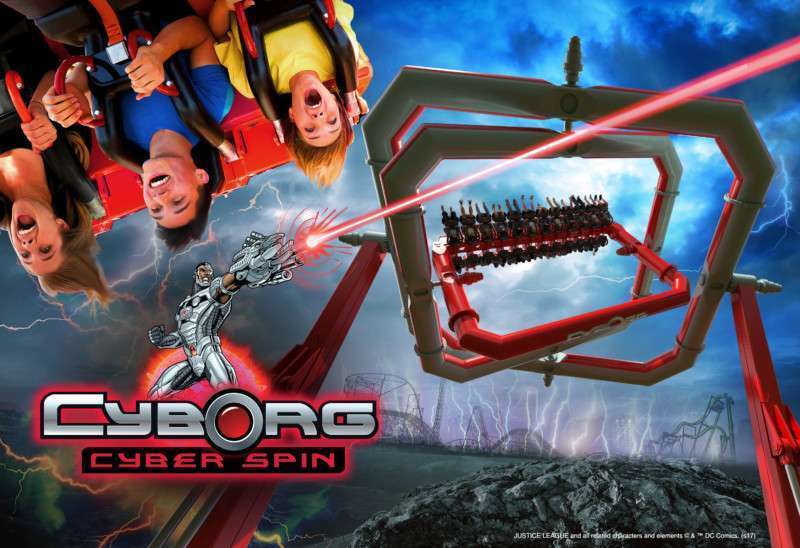 Coming to Six Flags Great Adventure, the first-of-its-kind in North America—and the first ride in the world themed after DC Super Hero CYBORG. Inspired by the movement of a gyroscope, CYBORG Cyber Spin features a unique futuristic triple box design that allows the gondola to spin around three separate axes while rotating forward, backwards and sideways up to 70 feet in the air. The floorless seats leave riders’ feet dangling as they whirl through the air. 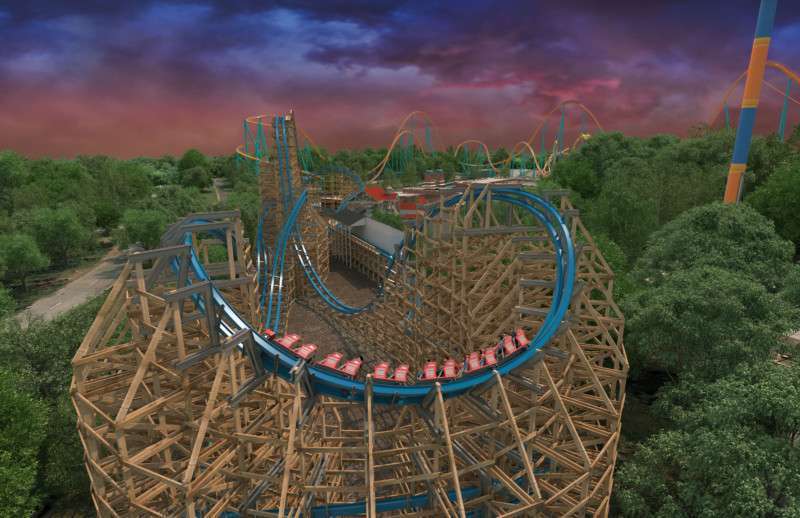 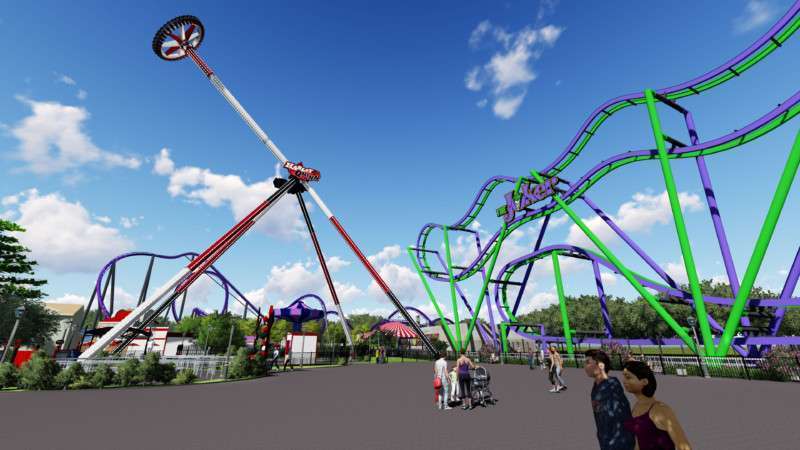 Six Flags New England, is taking thrills to a whole new level with HARLEY QUINN Spinsanity. This extreme pendulum ride whirls guests back and forth, higher and higher at up to 70 miles-per-hour for a dizzying ride experience as bizarre and unpredictable as HARLEY QUINN herself. Guests will be enthralled by a feeling of weightlessness at 147 feet in the air, before plunging downward from 15 stories.

Six Flags Mexico is launching its first ever 4D Free Fly Coaster in 2018. This uniquely designed roller coaster will feature theming based on DC’s iconic Super Hero—WONDER WOMAN. On the new WONDER WOMAN Coaster, riders are lifted straight up a 12-story, 90-degree hill and then immediately flipped head-over-heels, backwards and forwards multiple times as they speed along the undulating vertically stacked track. The technologically advanced Free Fly design allows cars to be extended outward from the track as riders sit suspended in mid-air. Two beyond 90-degree raven drops give the sensation of heart-pounding free-falls from high above the ground. 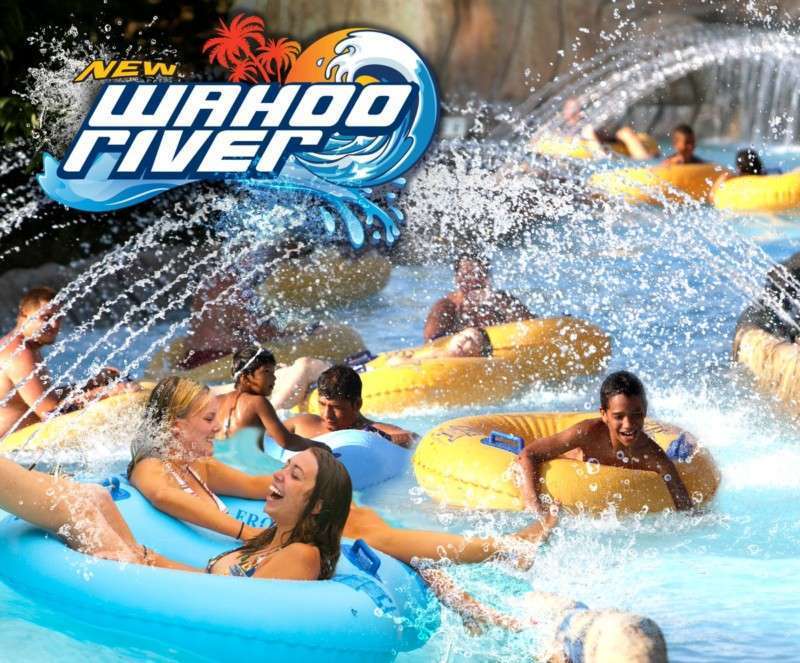 Six Flags America, near Washington D.C., will debut Wahoo River—an all-new action-packed river adventure—in its Hurricane Harbor water park. Bigger, Better and Wetter, Wahoo River will be 33% wider and over 40% longer than Castaway Creek. The new attraction will include significant upgrades such as a zero depth entry that will make it convenient for guests of all ages to dip into the cool water with inflatable tubes. Friends and family members will have a blast as they float along the river, enjoying dozens of interactive features including wall sprayers, huge waterfalls, archways, tippy water cones and a new wave generator. 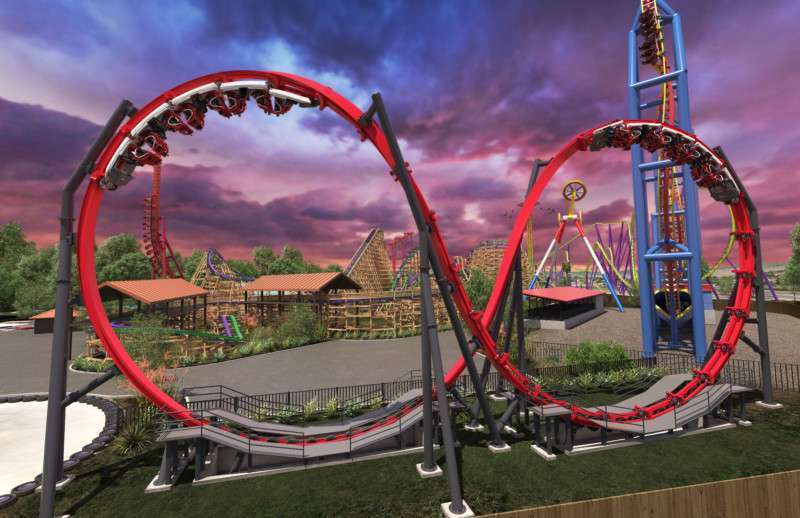 Six Flags Discovery Kingdom will debut the thrilling, new HARLEY QUINN Crazy Coaster, the world’s first-of-its-kind inverted looping coaster featuring multiple inversions along a vertical, figure eight track. Riders will experience head-to-head flybys at combined speeds of 70 miles-per-hour as the two dueling trains race toward each other, culminating with a “High Five” moment giving the illusion that riders can actually reach out and “High Five” as they careen by. 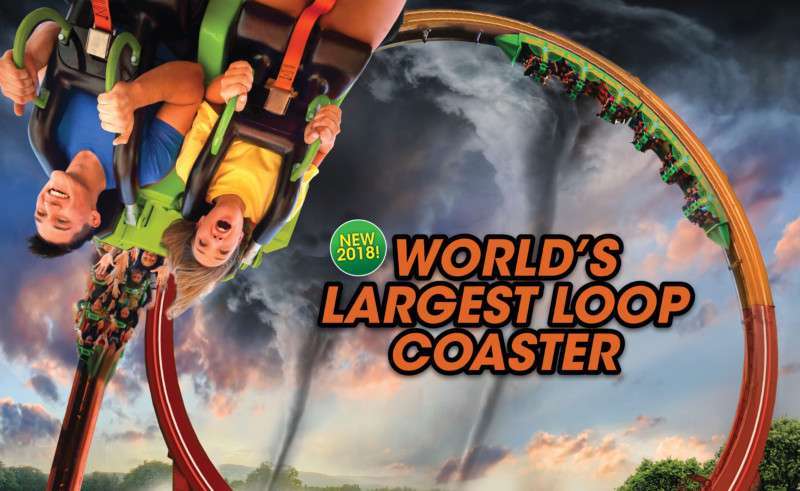 Towering at a staggering 100 feet in the air, the world’s largest loop coaster is headed to Six Flags Great America in 2018. This world-record breaking attraction will take riders forward and backward on a gigantic loop before suspending them completely upside down for plenty of wicked hang-time. Thrill seekers will travel in unique “face-off” seating and go through a series of 360-degree revolutions before reeling downward in the opposite direction. 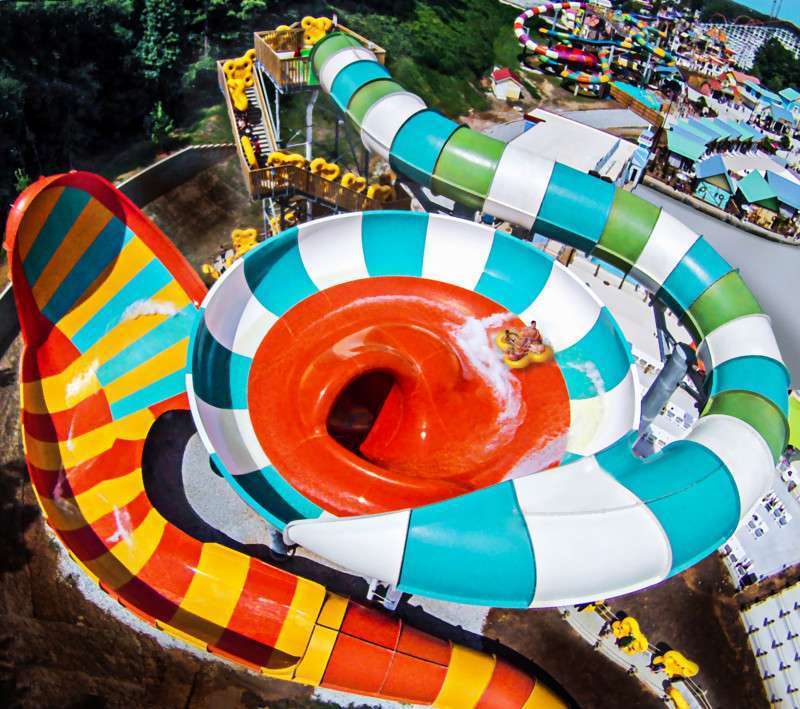 At Six Flags St. Louis, a massive new water attraction is headed to its Hurricane Harbor waterpark in 2018—Typhoon Twister. This hybrid, zero-gravity slide complex packs two extreme thrills into one incredible attraction. Typhoon Twister features four-person rafts that careen wildly into a 125-foot whirlpool bowl and spins riders around 360-degrees before sending them plummeting down an enclosed five-story drop. Riders will then be propelled up a 45-foot, zero-gravity wave wall to experience moments of weightlessness before shooting into the splash pool below. 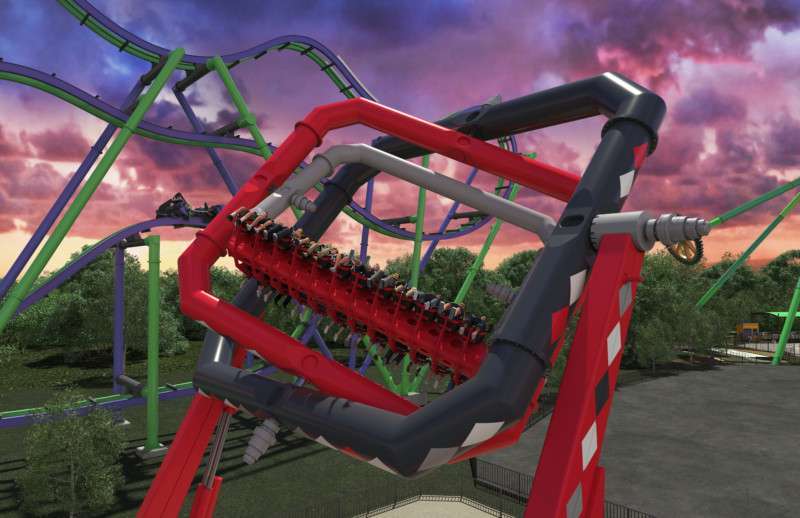 Six Flags Over Texas is ramping up for the next generation in thrill rides and the first-of-its-kind in North America—HARLEY QUINN Spinsanity. Staying true to its namesake—this innovative attraction promises to deliver a new level of thrills with unpredictable, gravity-defying flips, twist and turns. Seated 24 across with over-the-shoulder harnesses, riders will experience a thrilling combination of negative and positive gravitational forces as they rotate forward, backwards and sideways up to 70 feet in the air. 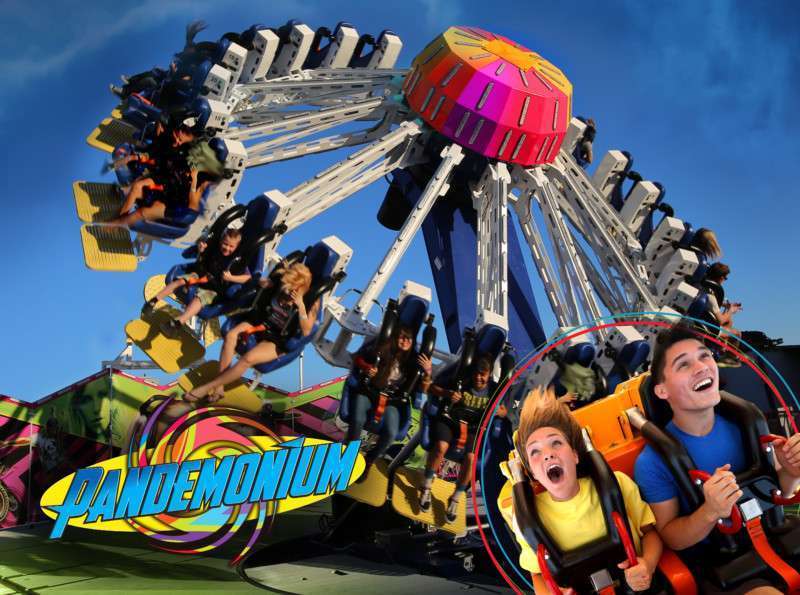 Complete Pandemonium is headed to The Great Escape and Splashwater Kingdom. On this classic spinning attraction, riders will catch maximum air and experience 360-degrees of adrenaline-packed excitement. Pandemonium will seat 24 rides in a “face out” position as it lifts, spins and tilts at all angles. The ride quickly accelerates faster and faster, while whirling guests through seemingly endless rotations. An electrifying light package will dazzle onlookers and riders alike.

La Ronde, in Montreal, is celebrating all things family with Carnaval en Folie—a new carnival-themed family zone, complete with three, fun new rides sure to delight the young and young at heart. Guests will be fully immersed in an atmosphere inspired by fairs and carnivals of yesteryear featuring rich, vibrant colors and festive music and lighting. Torsade is a spinning tilt-a-whirl where parents can ride with their children; Petit Roue is a fun-size Ferris wheel that offers the best view of the Carnaval; and Tourbillon is the perfect ride for thrill seekers in training. 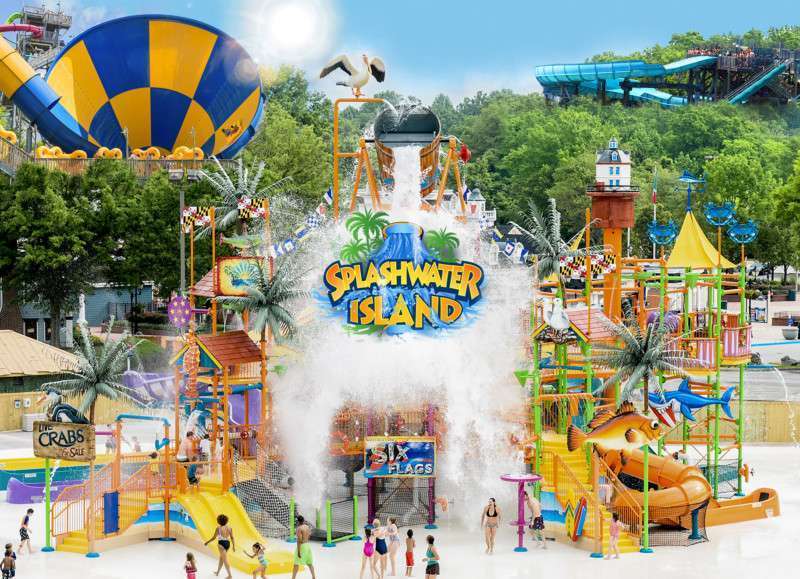 Waterworld Concord, the newest member of the Six Flags family of parks, is excited to debut its biggest new attraction in over a decade with the introduction of Splashwater Island, an enormous new interactive water play area designed for the entire family. Splashwater Island features almost 8,000 square feet of thrilling water activities including nine open and enclosed slides, dozens of geysers, jets, and sprays along with a super-sized water bucket that sits atop the huge play area dumping water every few minutes on guests standing below. Additional deck space with new lounging chairs and private cabanas are also part of the upgrades.

This fall, Six Flags delivers its annual Halloween Festival – Fright Fest®. Six Flags parks have never been scarier with more ghouls, more haunted mazes and more scares than ever. Every park has terrifying new zombies roaming the midways and creepier frights around every corner. Back by popular demand is Suicide Squad: The Six Flags Fright Fest Experience at Magic Mountain. This featured section at Six Flags Magic Mountain took park-goers by storm in 2016. The park’s DC UNIVERSE section will once again be completely transformed as the “Worst Heroes Ever” from the film Suicide Squad roam the streets. State-of-the-art digital imagery and fiery special effects add to the chilling atmosphere.

Later this year, Six Flags New England joins 10 Six Flags properties to ring in the holidays with Holiday in the Park®—a time-honored, feel good Six Flags tradition featuring a winter wonderland of all the beloved sights and sounds of the season, yummy holiday treats along with guest favorite rides and attractions, set against the backdrop of millions of twinkling lights.

Joe Kleimanhttp://wwww.themedreality.com
Raised in San Diego on theme parks, zoos, and IMAX films, InPark's Senior Correspondent Joe Kleiman would expand his childhood loves into two decades as a projectionist and theater director within the giant screen industry. In addition to his work in commercial and museum operations, Joe has volunteered his time to animal husbandry at leading facilities in California and Texas and has played a leading management role for a number of performing arts companies. Joe previously served as News Editor and has remained a contributing author to InPark Magazine since 2011. HIs writing has also appeared in Sound & Communications, LF Examiner, Jim Hill Media, The Planetarian, Behind the Thrills, and MiceChat His blog, ThemedReality.com takes an unconventional look at the attractions industry. Follow on twitter @ThemesRenewed Joe lives in Sacramento, California with his wife, dog, and a ghost.
Share
Facebook
Twitter
Linkedin
Email
Print
WhatsApp
Pinterest
ReddIt
Tumblr
Previous article
Expo 2020 Dubai forecasts 70% attendance from abroad – Can they do it?
Next article
TRIOTECH’s Fear the Walking Dead Survival Opens on Las Vegas’ Fremont Street Experience