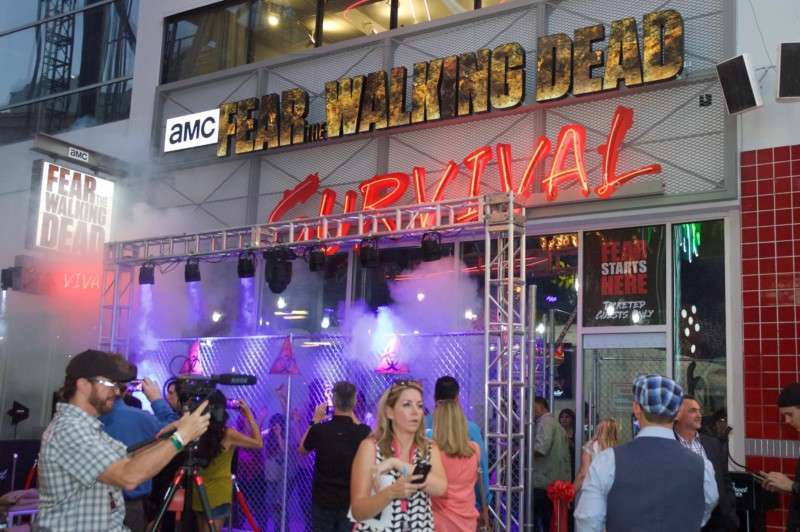 TRIOTECH and AMC® held a grand opening for the Fear the Walking Dead Survival attraction in Las Vegas on Tuesday. Inspired by the famous AMC® series, this unique multisensory experience, developed and produced entirely in Quebec, is located in the heart of Fremont Street Experience. The world premiere brought together several stars of the television series and delighted the American media.

“Las Vegas is a tourist destination known for its amazing variety of entertainment. It is therefore the ideal place for a futuristic, immersive and interactive attraction,” said Ernest Yale, President and CEO of TRIOTECH. “Fear the Walking Dead Survival incorporates many of our technologies and is a first for us in terms of creativity and immersion, as well as a business model.”

TRIOTECH is expanding its business model by becoming a co-owner of this attraction, which it fully developed, scripted, manufactured and installed. Day-to-day management of the attraction has been entrusted to Fremont Street Experience.

Fear the Walking Dead Survival will appeal to thrill seekers and zombie enthusiasts by bringing people into the world of the TV series through an immersive journey that includes an escape game, a labyrinth, and an interactive ride.

This new attraction brings visitors a unique Fear the Walking Dead experience. They find themselves in the setting of a military facility located inside a junior college amidst growing rumors of a zombie invasion. Brave souls will have to explore the inner-workings of the military-controlled facility, which includes multiple zones and various experiences, to confront their fears and protect themselves against a horde of blood-thirsty zombies. They will need to test their survival skills and instincts in the hope of getting back to the real world.

Joe Kleimanhttp://wwww.themedreality.com
Raised in San Diego on theme parks, zoos, and IMAX films, InPark's Senior Correspondent Joe Kleiman would expand his childhood loves into two decades as a projectionist and theater director within the giant screen industry. In addition to his work in commercial and museum operations, Joe has volunteered his time to animal husbandry at leading facilities in California and Texas and has played a leading management role for a number of performing arts companies. Joe previously served as News Editor and has remained a contributing author to InPark Magazine since 2011. HIs writing has also appeared in Sound & Communications, LF Examiner, Jim Hill Media, The Planetarian, Behind the Thrills, and MiceChat His blog, ThemedReality.com takes an unconventional look at the attractions industry. Follow on twitter @ThemesRenewed Joe lives in Sacramento, California with his wife, dog, and a ghost.
Share
Facebook
Twitter
Linkedin
Email
Print
WhatsApp
Pinterest
ReddIt
Tumblr
Previous articleSix Flags Announces 2018 Attractions
Next articleHolovis Brings Fantasy Island’s Mystical Mountain to Life

Thorpe Park’s X No Way Out Becomes The Walking Dead: The Ride Through the Immersive Mastery of Holovis